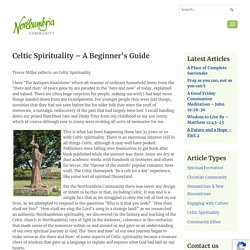 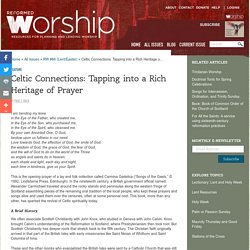 By your own Anointed One, O God, bestow upon us fullness in our need. Love towards God, the affection of God, the smile of God, the wisdom of God, the grace of God, the fear of God, and the will of God to do on the world of the Three as angels and saints do in heaven; each shade and light, each day and night, each time in kindness, give us your Spirit. This is the opening prayer of a lay and folk collection called Carmina Gadelica (“Songs of the Gaels,” © 1992, Lindisfarne Press, Edinburgh). In the nineteenth century, a British government official named Alexander Carmichael traveled around the rocky islands and peninsulas along the western fringe of Scotland assembling pieces of the remaining oral tradition of the local people, who kept these prayers and songs alive and used them over the centuries, often at some personal cost. 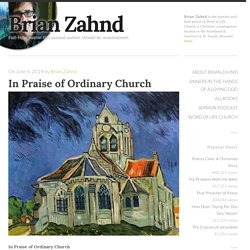 Comment Magazine. A Hebraic Perspective on Galatians. Galatians may well be the most misunderstood book in Scripture. 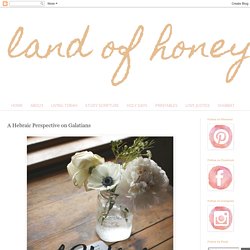 When I was first learning about Torah observance and the Hebrew faith, the idea of keeping the commandments would make sense...and then I would read Galatians and get very confused. It seems to go against so much of Scripture doesn't it? Passages are often pulled out of this book to say that we no longer need to follow YHWH's instructions. But Scripture doesn't contradict itself! Having a better perspective on this book will help us to see how it fits with all of the Word.There are a few things to remember when we read Galatians: -This is not meant to be read on its own but in conjunction with the rest of the Bible. 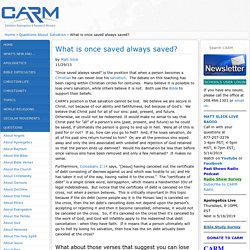 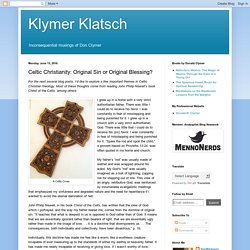 Most of these thoughts come from reading John Philip Newell’s book Christ of the Celts, among others. I grew up in a home with a very strict authoritarian father. There was little I could do to receive his favor. I was constantly in fear of misstepping and being punished for it. I grew up in a church with a very strict authoritarian God. My father’s “rod” was usually made of leather and was wrapped around his waist. The Child's Book on the Sabbath : Horace Hooker : Free Download, Borrow, and Streaming. What You Don't Know About Complementarian Women...... Why I’m Complementarian – Soliloquium. I’m continuing my thoughts here from my last post, where I outline what a winsome complementarianism might look like. 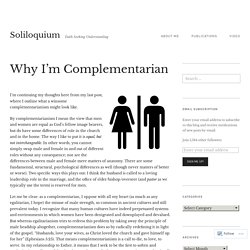 By complementarianism I mean the view that men and women are equal as God’s fellow image bearers, but do have some differences of role in the church and in the home. The way I like to put it is equal, but not interchangeable. In other words, you cannot simply swap male and female in and out of different roles without any consequence; nor are the differences between male and female mere matters of anatomy. There are some fundamental, structural, psychological differences as well (though never matters of better or worse). Two specific ways this plays out: I think the husband is called to a loving leadership role in the marriage, and the office of elder/bishop/overseer (and pastor as we typically use the term) is reserved for men.

God May Not Have a Wonderful Plan for Your Life. Quiet Time Strategies: 7 ways to be in the WORD Every Day. Grace-to-You. Two Awesome Bible Reading Tools - RachelWojo.com. Titus 2 « A Wife’s Submission. Please Note: more on the word translated “obedient” can be found on this page: Obey? 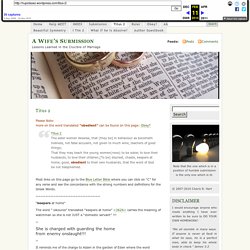 Titus 2 The elder women likewise, that [they be] in behaviour as becometh holiness, not false accusers, not given to much wine, teachers of good things; That they may teach the young women(neos) to be sober, to love their husbands, to love their children,[To be] discreet, chaste, keepers at home, good, obedient to their own husbands, that the word of God be not blasphemed. Most links on this page go to the Blue Letter Bible where you can click on “C” for any verse and see the concordance with the strong numbers and definitions for the Greek Words.

There’s No Paycheck for Motherhood: Finding Value in the Home. Gateway to Vine & Fig Tree. A Hebraic Understanding of Hospitality. A Compelling Reason for Rigorous Training of the Mind. Let Her be Veiled - An in-depth study of 1 Corinthians 11:1-16 - The Christian Head Covering. P.O. 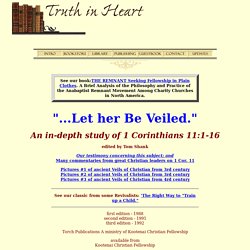 Box 907 Permission granted to publish on Internet. Retyped by Rick Friedrich in 05/1999. Preface Why do you wear that thing on your head? " "The watchmen who went about the city found me. Pacifism ≠ Passive-ism: Commitment to Peace does not mean withdrawal. I recently attended a conference held at the University of Pretoria that focused on the theme Violence in the Democratic South Africa: A Challenge to the Church and its Theology. 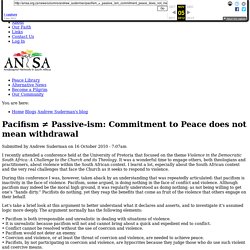 It was a wonderful time to engage others, both theologians and practitioners, about violence within the South African context. I learnt a lot, especially about the South African context and the very real challenges that face the Church as it seeks to respond to violence. During this conference I was, however, taken aback by an understanding that was repeatedly articulated: that pacifism is inactivity in the face of violence. Pacifism, some argued, is doing nothing in the face of conflict and violence. Although pacifism may indeed be the moral high ground, it was regularly understood as doing nothing; as not being willing to get one’s “hands dirty.” Christians Supporting Community Organizing. What Is A Full Quiver? The Bible calls debt a curse and children a blessing; but in our culture, we apply for a curse and reject blessings.

Something is wrong with this picture. Something is wrong indeed! Over the past year or so, I have started to come across more and more people – families – who would align with, or define themselves as “Quiverfull.” If you have access to cable television, you have probably been introduced to one such family through the show “18 Kids and Counting.” "Keepers at Home" In Titus 2:3-5 the apostle Paul charges the older women in the church to teach the younger women “to be sober, to love their husbands, to love their children, to be discreet, keepers at home, good, obedient to their own husbands, that the word of God be not blasphemed.”

The instruction for women to be “keepers at home” generally has been understood by the church as teaching that the sphere of a married woman’s work is her home. This understanding is reflected by the Puritan commentator Matthew Poole, who interpreted the phrase to mean: “housewives, not spending their time gadding abroad, but in looking to the affairs of their own families.”[1] The Christian woman as a housewife, looking diligently to the affairs of her family, was the standard in Puritan New England: In seventeenth century New England no respectable person questioned that a woman’s place was in the home. Hospitality is About You...Not Me - Come Fill Your Cup. “Entertaining says, ‘I want to impress you with my beautiful home, my clever decorating, my gourmet cooking.’ Hospitality, however, seeks to minister. It says, ‘This home is not mine. It is truly a gift from my Master.

Alexandre Christoyannopoulos - Christian Anarchism: A Political Commentary on the Gospel. Description (from the back cover): Christian anarchism has been around for at least as long as “secular” anarchism. The existing literature cites Leo Tolstoy as its most famous (sometimes even as the only) proponent, but there are many others, such as Jacques Ellul, Vernard Eller, Dave Andrews or the people associated with the Catholic Worker movement. Both individually and collectively, these Christian anarchists offer a compelling critique of the state, the church and the economy based on numerous passages from the New Testament. Yet despite the relevance and growth of this literature, no generic study bringing together these different thinkers or reflecting on their contribution has been published to date, because such work involves meticulous searching, compiling and structuring of countless different texts and sources, not all of which are easily accessed.

Stop Saying “God Knows My Heart” to Excuse Sin. When confronted with their sins, it’s not uncommon to hear people say, “Yeah, but God knows my heart.” I usually take this to mean, “What I’m doing might be wrong, but in my heart, I’m a good person. God knows that. So I don’t think He will hold me accountable for my actions.” These folks obviously believe in God and believe in sin, but they believe that having a “good heart” is justification for their sin. God says that’s not true. Your Sins Proceed from Your Heart. Yes, God Will Give You More Than You Can Handle. Flagless, A Christian Anarchist Cooperative - New LWA Member. Spiritual Abuse?

The Myth of the Lukewarm Christian – Eric Paździora. FLAGLESS, Christians & Anarchists? I'm glad to be an American. But I won't really celebrate the Fourth of July. WWCAD: What Would Christian Anarchists Do? Christian Anarchy (Eller) A Theonomic Defense of Pacifism. Biblical Law - Including the Old Testament - Opposes War, Capital Punishment, and Lethal Self-Defense About the Author.

When Your Politics Becomes Your Lord. How to effectively resolve deep-seated anger. Bastard's Summary of the Bible. Making Your Home a Haven {Week 2 - Music} - Women Living Well. Taking Discipleship out of the Coffee Shop. Worship as Wild Courtship - WWW.JESUSRADICALS.COM. Lesson 4: Why You Should NOT Tithe (Selected Scriptures) Kingdom Come: Five Spiritual Exercises for Lent. The Fellowship of The King. Lent in Our Catholic Home - elizabeth clare. THE ULTIMATE LIST OF PRAYER JOURNAL PROMPTS — A Symphony of Praise. Sweet Little Ones: Lent 2015: Choosing the Better Part. Selah - A Biblical Word Study. \'Selah\': It Appears 74 Times In The Bible But What Does It Mean? Training Course 201 - Elijah House. Energy Healing: A Christian Theological Appraisal - Glocal Christianity.

Earth Day: Where are the Tree-Hugging Christians? — Spirit of Health - Natural Health Online. The Ancient Solfeggio Scale. The Breath of Life. Pinterest. Maranatha Meditation. Romans 13 and the Christian Anarchist. How to Set Up Your Scripture Journal to Study by Chapters – Worthy Written Words. 4 Reasons to Fall in Love With Celtic Christianity. A Circling Prayer for the Week – Godspacelight. Biblical Months and Years — Prophetic Art of James Nesbit. The Enemy’s Strategies by Priscilla Shirer – 1Arthouse. How I Found a Space to Pray in my Small House. The Letter Hey ~ Psalms 119: 33-40.