Female Urinary Incontinence: Know the Non-Mesh Alternatives. It is important for all women to be educated on how their urinary tract works and options that exist when problems occur. 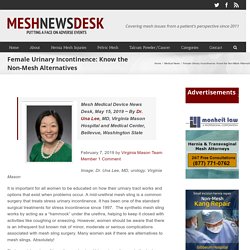 A mid-urethral mesh sling is a common surgery that treats stress urinary incontinence. It has been one of the standard surgical treatments for stress incontinence since 1997. The synthetic mesh sling works by acting as a “hammock” under the urethra, helping to keep it closed with activities like coughing or sneezing. However, women should be aware that there is an infrequent but known risk of minor, moderate or serious complications associated with mesh sling surgery.

Many women ask if there are alternatives to mesh slings. First, a quick review of incontinence basics. There are difference types of urinary incontinence, including: The type of incontinence is important, because different treatments target different types. Weight loss is another non-surgical opportunity. Stopping smoking is another effective step. Emmett Prolift, TOT Mesh Trial in Philadelphia Adjourns Until January. Case of Late Chrissy Brajcic Still Unresolved with J&J. Mesh Medical Device News Desk, November 30, 2018~ It’s been one year since the death of 42-year-old Christina Lynn Brajcic of Windsor, Ontario. 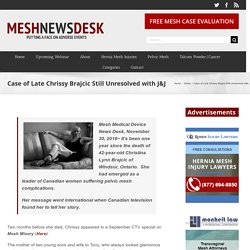 She had emerged as a leader of Canadian women suffering pelvic mesh complications. Her message went international when Canadian television found her to tell her story. Two months before she died, Chrissy appeared in a September CTV special on Mesh Misery (Here). The mother of two young sons and wife to Tony, who always looked glamorous and put together, appeared pale and weak in her final Facebook appearances. Chrissy, Nov 17 post Chrissy the Fab, as she was known, talked about the relentless infections that would return despite treatment with antibiotics. “Literally couldn’t move talk I was dying, I couldn’t breathe….How did this happen how do I go from infection to heart failure?” How Women Got Essure Off the Market. 500 Women Have Ethicon Mesh Cases Dismissed. Mesh, Autoimmunity, Allergies and Vitamin D. Mesh Medical Device News Desk, June 25, 2018 ~ In some mesh-implanted patients, an autoimmune response is incited. 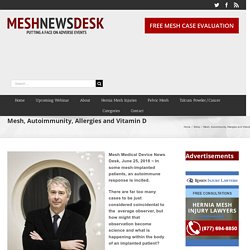 There are far too many cases to be just considered coincidental to the average observer, but how might that observation become science and what is happening within the body of an implanted patient? Mesh, Autoimmunity, Allergies and Vitamin D Jan Willem Cohen Tervaert, is the Director of Rheumatology at the University of Alberta, Canada. His current fields of interest are inflammation and autoimmunity caused by not only genes but environmental factors such as low levels of Vitamin D, S. aureus (Staph. Aureus bacterium), silica and the foreign body implantation of silicones, such as breast implants and polypropylene mesh. As a result of his interest, women with systemic reactions to their mesh, as well as men implanted with hernia mesh, are being referred to him. 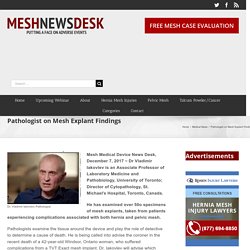 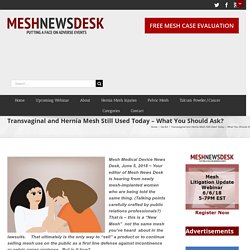 (Talking points carefully crafted by public relations professionals?) That is – this is a “New Mesh” not the same mesh you’ve heard about in the lawsuits. That ultimately is the only way to “sell” a product or to continue selling mesh use on the public as a first line defense against incontinence or pelvic organ prolapse. But is it true? Ethicon MDL Trial Delay Till August - Mesh Medical Device News Desk. Wave, WikiCommons Mesh Medical Device News Desk, May 16, 2018 ~ What happened to the Ethicon, (Johnson & Johnson) product liability trial that was supposed to start in Charleston, West Virginia in May?

Ethicon MDL Trial Delay Till August You might have heard the terms Wave 7, which is a grouping of plaintiffs with a similarity, that is, similar pelvic mesh, in this case, or all from West Virginia, for example. Clear the Decks – Judge Goodwin Pushes 23K Pelvic Mesh Cases to Conclusion! - Mesh Medical Device News Desk. Judge Joseph Goodwin Mesh Medical Device News Desk, February 5, 2018 ~ Its time to clear the decks of the MDL and Judge Goodwin’s orders show he has run out of patience after six years of pelvic mesh litigation that continues to linger in his federal courtroom. 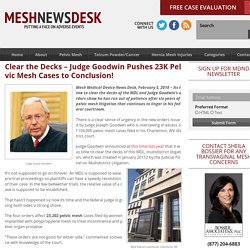 There is a clear sense of urgency in the new orders issued by Judge Joseph Goodwin who is overseeing in excess of 104,000 pelvic mesh cases filed in his Charleston, WV district court. Bryd federal courthouse, Charleston, WV Judge Goodwin announced at this time last year that it was time to clear the decks of this MDL, multidistrict litigation, which was created in January 20112 by the Judicial Panel on Multidistrict Litigation. It’s not supposed to go on forever. That hasn’t happened so now its time and the federal judge is giving both sides a strong shove. 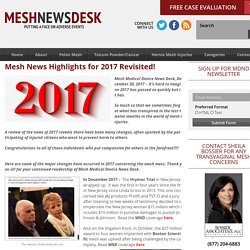 So much so that we sometimes forget what has transpired in the last twelve months in the world of mesh injuries. A review of the news of 2017 reveals there have been many changes, often sparked by the participating of injured citizens who want to prevent harm to others. **Breaking News **Jury Returns in Hrymoc Pelvic Mesh Trial - $15 Million! - Mesh Medical Device News Desk. Adam Slater, Courtroom View Network Mesh Medical Device News Desk, December 14, 2017 ~ The case of Elizabeth Hrymoc returned with a jury verdict of $15 million for the mesh injured woman including $10 million in punitive damages. 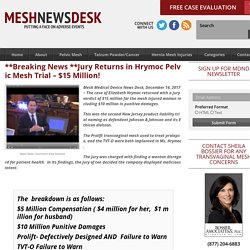 This was the second New Jersey product liability trial naming as defendant Johnson & Johnson and its Ethicon division. The Prolift transvaginal mesh used to treat prolapse, and the TVT-O were both implanted in Ms. Hrymoc. The jury was charged with finding a wanton disregard for patient health. J&J New Jersey Mesh Trial Wraps Up - Mesh Medical Device News Desk. Tad and Elizabth Hrymoc, from NorthJersey.com Mesh Medical Device News Desk, December 12, 2017 ~ The pelvic mesh trial of plaintiff Elizabeth Hyrmoc will wrap up this week with closing arguments presented Wednesday, December 13. 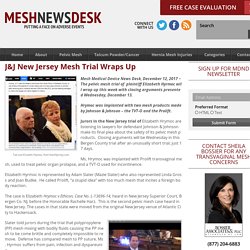 Hrymoc was implanted with two mesh products made by Johnson & Johnson – the TVT-O and the Prolift. Jurors in the New Jersey trial of Elizabeth Hrymoc are listening to lawyers for defendant Johnson & Johnson make its final plea about the safety of its pelvic mesh products. Closing arguments will be Wednesday in this Bergen County trial after an unusually short trial, just 17 days. Ms. Elizabeth Hyrmoc is represented by Adam Slater (Mazie Slater) who also represented Linda Gross and Joan Budke. The case is Elizabeth Hrymoc v Ethicon, Case No. Death of a Pelvic Mesh Fighter – “I Don’t Want This to Happen to Anybody” - Mesh Medical Device News Desk. Chrissy and Tony Brajcic Mesh Medical Device News Desk, December 6, 2017 ~ The last years of her life were spent educating and sharing on social media- talking about the life hers had become – one of pain and suffering after a TVT pelvic mesh implant to treat incontinence. Christina Lynn Brajcic of Windsor, Ontario had emerged as a leader of Canadian women suffering pelvic mesh complications.

Her message was heard internationally and when Canadian television was looking for a representative, Chrissy was chosen. Always looking well put together and glamorous, she was interviewed and videotaped for a September CTV special on Mesh Misery. (Here). Chrissy’s Post, November 27, 2017. She launched a Facebook Live with interactive questions to raise awareness, not unlike a Mesh TV show, she said. Among the last posts of Chrissy the Fab, as she was known, talked about the relentless infections that would return despite treatment with antibiotics. Daughter Fighting Late Mother's Pelvic Mesh Case - Mesh Medical Device News Desk. Vada Mae Smith, son Jimmy, and grandson Mesh Medical Device News Desk, November 27, 2018 ~ Mary Dickson plans to go up against healthcare giant, Johnson & Johnson over its pelvic mesh on behalf of her late mother, Vada Mae Smith, unless she can find a law firm to take her case.

Vada Mae Smith spent most of her life in Summers County, West Virginia. Her father, Daniel Green Sears, was a railroader and his wife handed one-month old Vada Mae over to Daniel on a street corner in Hinton W.V. a few days before Christmas 1942. Drs Raz and Ackerman: Risks and Benefits Lacking for Slings - Mesh Medical Device News Desk. Dr. Shlomo Raz, UCLA Urology Mesh Medical Device News Desk, November 7, 2017 ~ This well thought out opinion piece is voiced by two leaders who are well acquainted with the devastating injuries resulting from women implanted with mesh, “slings” and transvaginal mesh, used to treat incontinence and prolapse. Writing in the International Brazilian Journal of Urology, in July-August 2016 is an Opinion Piece (here) by Dr. A. Lenore Ackerman and Shlomo Raz MD. All Mesh "High Risk" in Australia - Mesh Medical Device News Desk. Uphold, Taranakiobgyn, NZ website Mesh Medical Device News Desk, October 30, 2017 ~ In a quiet but striking move, Australia’s drug and medical device regulator has strengthened the classification of pelvic mesh, increasing the likelihood it will not be used, especially as a first-line treatment.

If you were not paying attention you might not have noticed an announcement last Thursday, October 26. All pelvic mesh devices in Australia are to be reclassified from moderate to “high risk” over the next 24 months. The announcement was made on the Therapeutic Goods Administration (TGA) website (here), the Australian version of the U.S. Food and Drug Administration (FDA). The reclassification will begin in December 2018, for the larger pelvic organ prolapse (POP) mesh, used to treat falling pelvic organs. At the same time, the smaller “tape” or “slings” used to treat stress urinary incontinence (SUI) will be upgraded to high risk by December, 2020, a full 26 months away. Informed Consent - What We Are Learning - Mesh Medical Device Newsdesk. Mesh Medical Device News Desk, August 18, 2017 ~ What are we learning about Informed Consent?

Mesh Medical Device News Desk, September 21, 2016 ~ Consumers injured by pelvic mesh may want to reach out to the medical group with a specialty in female pelvic health. This survey Note * Please check the “Other” box to add any comments. The American Urogynecologic Society (AUGS) has created a survey to learn more about patients’ experiences with SUI, stress urinary incontinence, treatment of SUI and life after the treatment selected. They are interested in hearing from women to help raise awareness and better inform other patients seeking information about SUI treatment options. The American Urogynecologic Society is a medical society of roughly 1,800 members, many of whom have a specialty in urogynecology. AUGS is planning its upcoming annual conference in Denver next week to discuss, among other things, the future of pelvic mesh in light of 100,000 defective product lawsuits filed in the U.S. alone.