Remarkable 3,900-Year-Old Suit Of Bone Armor Found In Siberia. Metal Foam Stops .50 Caliber Rounds as Well as Steel – At Less Than Half the Weight. Researchers have demonstrated that vehicle armor using composite metal foam (CMF) can stop ball and armor-piercing .50 caliber rounds as well as conventional steel armor, even though it weighs less than half as much. 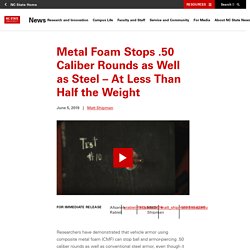 The finding means that vehicle designers will be able to develop lighter military vehicles without sacrificing safety, or can improve protection without making vehicles heavier. CMF is a foam that consists of hollow, metallic spheres – made of materials such as stainless steel or titanium – embedded in a metallic matrix made of steel, titanium, aluminum or other metallic alloys. In this study, the researchers used steel-steel CMF, meaning that both the spheres and the matrix were made of steel. Home - Safe Life Defense Body Armor. New & Used Books, Rare Books, Textbooks, Out of Print Books. Metmuseum. 2,000 year old warrior armour made of reindeer antlers found on the Arctic Circle. 'The ornamentation on the plates can be individual, that is after the through analysis we could say how many warriors left armour here.' Picture: Andrey Gusev The discovery is the oldest evidence of armour found in the north of western Siberia, and was located at the rich Ust-Polui site, dating to between the 1st century BC and the 1st century AD. 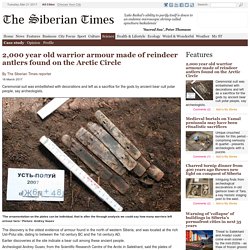 Earlier discoveries at the site indicate a bear cult among these ancient people. Archeologist Andrey Gusev, from the Scientific Research Centre of the Arctic in Salekhard, said the plates of armour found at the site are all made from reindeer antlers. 'The largest were 23-25 centimetres in length (pictured upper left). 'There are about 30 plates in the collection of Ust-Polui,' he said. The largest were 23-25 centimetres in length. Others are 12-14 centimetres in length, thinner and richly ornamented. New "Iron Man" Special Forces Exoskeleton Stops Bullets With Liquid Armor. In Brief We may have a new combat exoskeleton prototype in 2018. 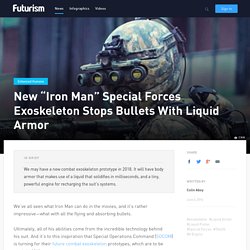 It will have body armor that makes use of a liquid that solidifies in milliseconds, and a tiny, powerful engine for recharging the suit's systems. We’ve all seen what Iron Man can do in the movies, and it’s rather impressive—what with all the flying and absorbing bullets. Evolution Of European Helmets. A helmet—a defensive covering for the head—is made of hard materials for resisting blows so as to protect ears, neck, eyes, and face. 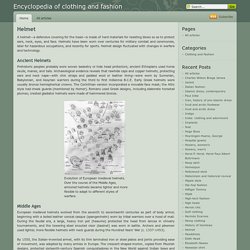 Helmets have been worn over centuries for military combat and ceremonies, later for hazardous occupations, and recently for sports. Armor/Armour, mostly 13th-16th Century Gothic and Italian Made. Optically Clear Aluminum Provides Bulletproof Protection. While the U.S. 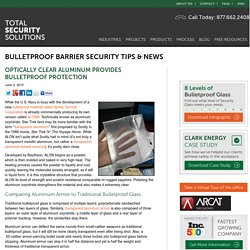 Navy is busy with the development of a new bulletproof material called Spinel, Surmet Corporation is already commercially producing its own version called ALON®. Technically known as aluminum oxynitride, Star Trek fans may be more familiar with the term “transparent aluminum” first proposed by Scotty in the 1986 movie, Star Trek IV: The Voyage Home. While ALON isn’t quite what Scotty had in mind (it’s not truly a transparent metallic aluminum, but rather a transparent aluminum-based ceramic), it’s pretty darn close.

Developed by Raytheon, ALON begins as a powder, which is then molded and baked in very high heat. The heating process causes the powder to liquefy and cool quickly, leaving the molecules loosely arranged, as if still in liquid form. Comparing Aluminum Armor to Traditional Bulletproof Glass Traditional bulletproof glass is comprised of multiple layers: polycarbonate sandwiched between two layers of glass. Gaius Ludus: D&D Options - Detailed armor class: using armor slots and extra parts in game. Since the development of electronic games, armor slots have become a staple in electronic rpgs. 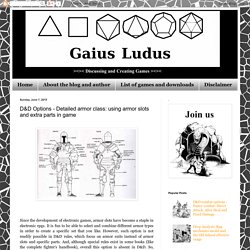 It is fun to be able to select and combine different armor types in order to create a specific set that you like. However, such option is not readily possible in D&D rules, which focus on armor suits instead of armor slots and specific parts. And, although special rules exist in some books (like the complete fighter's handbook), overall this option is absent in D&D. This student's created a Batman outfit - and it works. Hanging in his workshop Gordon has a full suit of armor plating, cape and cowl -- matte black and built to stop a knife. 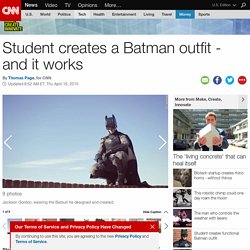 Gordon has an alter ego: the Dark Knight himself, Batman. You might expect his origin story to be cloaked in mystery, but speaking to CNN Gordon is quick to explain how the transformation took place. Gordon says his calling came five years ago when he began experimenting with cosplay. "Previously I'd been involved with costume making... I'd made a version of the Batsuit from Christopher Nolan's 'Dark Knight Trilogy' and I really liked that suit," Gordon says. But, as elaborate as his design was, it lacked the functionality or the authenticity of the genuine article. "I was frustrated every time I wore it," Gordon explains. Building the Batsuit In September 2014 he bit the bullet, deciding "to do another one that wouldn't inhibit my mobility and would actually provide protection and function more like Batman's actual suit.

" Gordon therefore fired up a Kickstarter campaign. Armatusdesigns. Dispelling some Medieval armour myths (with cool pics) - Album on Imgur. 5 Common Armor Misconceptions. Archaeologists unearth 4,000-year-old Siberian knight armour made of bone. The Weirdest and Fiercest Helmets from the Age of Armored Combat. 10 Retro Body Armors That Will Transform You Into An Old-School Iron Man.