Why Physicists Are Saying Consciousness Is A State Of Matter, Like a Solid, A Liquid Or A Gas — The Physics arXiv Blog 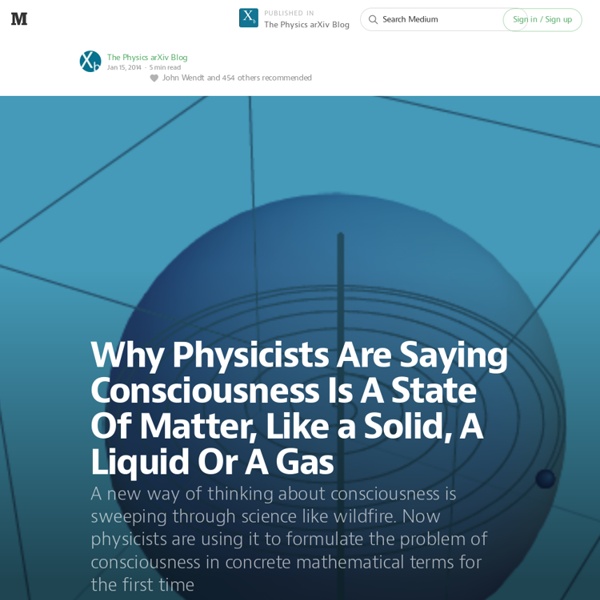 There’s a quiet revolution underway in theoretical physics. For as long as the discipline has existed, physicists have been reluctant to discuss consciousness, considering it a topic for quacks and charlatans. Indeed, the mere mention of the ‘c’ word could ruin careers. That’s finally beginning to change thanks to a fundamentally new way of thinking about consciousness that is spreading like wildfire through the theoretical physics community. And while the problem of consciousness is far from being solved, it is finally being formulated mathematically as a set of problems that researchers can understand, explore and discuss. Today, Max Tegmark, a theoretical physicist at the Massachusetts Institute of Technology in Cambridge, sets out the fundamental problems that this new way of thinking raises. Tegmark’s approach is to think of consciousness as a state of matter, like a solid, a liquid or a gas. Tegmark does not have an answer.

Quantum physics enables perfectly secure cloud computing Researchers have succeeded in combining the power of quantum computing with the security of quantum cryptography and have shown that perfectly secure cloud computing can be achieved using the principles of quantum mechanics. They have performed an experimental demonstration of quantum computation in which the input, the data processing, and the output remain unknown to the quantum computer. The international team of scientists will publish the results of the experiment, carried out at the Vienna Center for Quantum Science and Technology (VCQ) at the University of Vienna and the Institute for Quantum Optics and Quantum Information (IQOQI), in the forthcoming issue of Science. Dave Pruett: Science vs. Pseudoscience "Science does not need mysticism and mysticism does not need science, but [humans need] both." -- Fritjof Capra A conflict between "science" and "pseudoscience" is now playing out on the national stage, including in the Huffington Post. The conversation is long overdue. I speak of the recent flap surrounding two TED lectures on the nature of consciousness -- by Rupert Sheldrake and Graham Hancock -- that were initially removed from YouTube because TED's scientific curators deemed them "pseudoscience." The move generated strong reaction from TED's normally doting followers. Sheldrake's and Graham's offense: proposing the unorthodox view that consciousness is nonlocal.

A Neuroscientist's Radical Theory of How Networks Become Conscious - Wired Science It’s a question that’s perplexed philosophers for centuries and scientists for decades: Where does consciousness come from? We know it exists, at least in ourselves. But how it arises from chemistry and electricity in our brains is an unsolved mystery. Building 'invisible' materials with light A new method of building materials using light, developed by researchers at the University of Cambridge, could one day enable technologies that are often considered the realm of science fiction, such as invisibility cloaks and cloaking devices. Although cloaked starships won't be a reality for quite some time, the technique which researchers have developed for constructing materials with building blocks a few billionths of a metre across can be used to control the way that light flies through them, and works on large chunks all at once. Details are published today (28 July) in the journal Nature Communications. The key to any sort of 'invisibility' effect lies in the way light interacts with a material. When light hits a surface, it is either absorbed or reflected, which is what enables us to see objects.

Consciousness: The what, why and how (Image: Nate Kitch) THERE are a lot of hard problems in the world, but only one of them gets to call itself "the hard problem". And that is the problem of consciousness – how a kilogram or so of nerve cells conjures up the seamless kaleidoscope of sensations, thoughts, memories and emotions that occupy every waking moment. The intractability of this problem prompted British psychologist Stuart Sutherland’s notorious 1989 observation: "Consciousness is a fascinating but elusive phenomenon… Nothing worth reading has been written on it."

The Noosphere (Part I): Teilhard de Chardin’s Vision A depiction of the Noosphere One of the key concepts of Teilhard de Chardin’s philosophy is the noosphere, which Teilhard believes is the next phase of human evolution. Today is the first of a three part series discussing the noosphere: Part I: Teilhard de Chardin’s Vision Part II: Christian Concepts of the Noosphere Part III: Future Evolution of the Noosphere Scientists construct first map of how the brain organizes everything we see Our eyes may be our window to the world, but how do we make sense of the thousands of images that flood our retinas each day? Scientists at the University of California, Berkeley, have found that the brain is wired to put in order all the categories of objects and actions that we see. They have created the first interactive map of how the brain organizes these groupings. Alex Huth explains the science of how the brain organizes visual categories. (Alex Huth video) The result — achieved through computational models of brain imaging data collected while the subjects watched hours of movie clips — is what researchers call “a continuous semantic space.”

Scientists Prove DNA Can Be Reprogrammed by Words and Frequencies By Grazyna Fosar and Franz Bludorf THE HUMAN DNA IS A BIOLOGICAL INTERNET and superior in many aspects to the artificial one. Russian scientific research directly or indirectly explains phenomena such as clairvoyance, intuition, spontaneous and remote acts of healing, self healing, affirmation techniques, unusual light/auras around people (namely spiritual masters), mind’s influence on weather patterns and much more. In addition, there is evidence for a whole new type of medicine in which DNA can be influenced and reprogrammed by words and frequencies WITHOUT cutting out and replacing single genes. Only 10% of our DNA is being used for building proteins. It is this subset of DNA that is of interest to western researchers and is being examined and categorized.

What Happens to the Brain During Spiritual Experiences? - Lynne Blumberg The field of neurotheology uses science to try to understand religion, and vice versa. A devotee in a state of trance is calmed by volunteers at a Buddhist temple in Nakhon Pathom Province, Thailand. (Athit Perawongmetha/Reuters) “Everyone philosophizes,” writes neuroscientist Dr. Andrew Newberg in his latest book, The Metaphysical Mind: Probing the Biology of Philosophical Thought. We all speculate about the meaning of all kinds of things, from everyday concerns about dealing with a co-worker to our ultimate beliefs about the purpose of existence. Inter-Locking Waveforms & the Five Sense World V. Susan Ferguson, ContributorWaking Times “The only way to traverse the vast distances of space is to possess the means of manipulating or altering the very structure of space itself — altering the space-time geometric matrix, which to us provides the illusion of form and distance.

Research on Near Death Experiences I just returned from an exciting conference held at the biotech company, Promega. The meeting was entitled Final Passages: Research on Near Death & the Experience of Dying. This eleventh in a series of bioethics forums was held in Madison, WI, April 26–27, 2012, and focused on scientific research into social and ethical issues around dying and near-death experiences. A stellar lineup of global experts addressed a wide range of topics as well as the implications of current research for understanding consciousness. The conference was introduced and chaired by Bill Linton, the founder and CEO of Promega. In his opening remarks, Linton described various ways in which our understanding of consciousness can be broadened in our attempts to understand the nature of human experience.