We Can't Ignore the ADHD Girls in School Anymore. Every class had those boys — the ones who didn’t do their work and always climbed out of their seats. 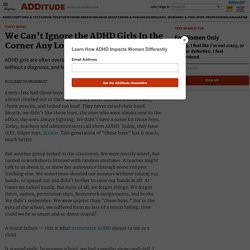 They never finished a worksheet, threw pencils, and talked too loud. They never raised their hand. Mostly, we didn’t like those boys, the ones who were always sent to the office, the ones always fighting. ADHD in Girls and Women: Symptoms and Treatment for ADD in Females. ADHD in Girls: Recognizing Key Symptoms ADHD in girls — particularly if it’s the inattentive type of ADHD formerly called ADD — can look like this: daydreaming quietly in classfeeling anxious or sadexhibiting silliness or apparent ditzinessacting shy or inattentivetrouble maintaining friendshipspicking at cuticles or skinbeing a perfectionist ADHD in Girls is Often Missed Twenty-year-old Andrea Burns fits the description of ADHD in girls perfectly. 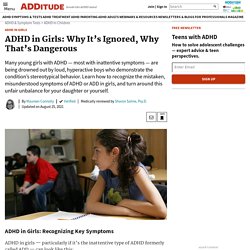 Rejection Sensitive Dysphoria: How to Treat it Alongside ADHD. Rejection sensitive dysphoria (RSD) is an extreme emotional sensitivity and emotional pain triggered by the perception — not necessarily the reality — that a person has been rejected, teased, or criticized by important people in their life. 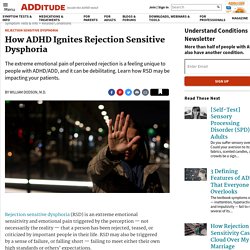 RSD may also be triggered by a sense of failure, or falling short — failing to meet either their own high standards or others’ expectations. Dysphoria is Greek for “difficult to bear.” It’s not that people with attention deficit disorder (ADHD or ADD) are wimps, or weak; it’s that the emotional response hurts them much more than it does people without the condition. When this emotional response is internalized, it can imitate a full, major mood disorder complete with suicidal ideation. The sudden change from feeling perfectly fine to feeling intensely sad that results from RSD is often misdiagnosed as rapid cycling BPD. [Self-Test: Could You Have Rejection Sensitive Dysphoria?] Rejection sensitivity is hard to tease apart. ADDitude Slide Show. Published on ADDitudeMag.com by Thomas E. 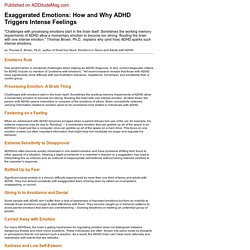 Brown, Ph.D., author of Smart but Stuck: Emotions in Teens and Adults with ADHD Emotions Rule. ADDitude Slide Show. I Have ADHD and I Need Support from You. The ADHD Effect on Marriage: How to Save Your Relationship. 7 Types of ADD: More Resources on Adult ADHD. ADHD Emotions: Understanding Your Emotion Commotion. How to Organize Your Life with Adult ADHD: Clear Clutter. 11. 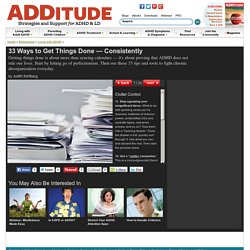 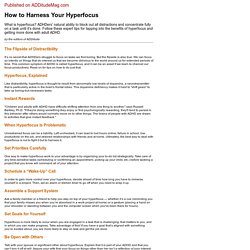 But the flipside is also true: We can focus so intently on things that do interest us that we become oblivious to the world around us for extended periods of time. This common symptom of ADHD is called hyperfocus, and it can be an asset if we learn to channel our focus productively. Hyperfocus, Explained Like distractibility, hyperfocus is thought to result from abnormally low levels of dopamine, a neurotransmitter that is particularly active in the brain's frontal lobes. Instant Rewards. ADDitude Slide Show. Symptoms of ADHD may trace back to your childhood, though they were never diagnosed as such. 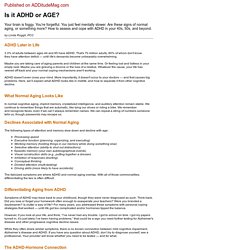 Think back. Did you lose or forget your homework often enough to exasperate your teachers? Were you branded a daydreamer? Is clutter a way of life? For many years, you addressed these symptoms with personal coping strategies that worked — until life got too complicated and/or hormones tipped the balance. However, if you look at your life, and think, “I’ve never had any trouble. Mobile Site Preview. 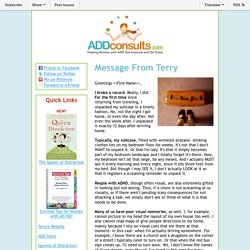 Really, I did. For the first time since returning from traveling, I unpacked my suitcase in a timely fashion. No, not the night I got home, or even the day after. Not even the week after. Typically, my suitcase, filled with wrinkled airplane- stinking clothes lies on my bedroom floor for weeks. People with ADHD, though often visual, are also extremely gifted in looking but not seeing. Many of us have poor visual memories, as well. Mobile Site Preview. At 40, Lisa Ling Gets Surprising Diagnosis Of ADD. During filming for "Our America With Lisa Ling" on the topic of Attention Deficit Hyperactivity Disorder (ADHD), Lisa Ling couldn't shake the feeling that she was reporting on something all too familiar. 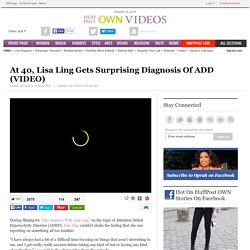 "I have always had a bit of a difficult time focusing on things that aren't interesting to me, and I get really, really anxious before taking any kind of test or having any kind of evaluation," Ling said in the above video from the episode. The journalist decided to get tested to see if she does indeed have an attention disorder. Dr. Craig Liden, a worldwide ADD/ADHD expert, began the evaluation by asking Ling about her key areas of concern.

"As a journalist, when I'm immersed in a story, then I feel like I can laser-focus. As early as elementary school, Ling says that her teachers frequently told her parents about her issues focusing. After the initial evaluation, Ling went to another room for a series of tests as Liden watched from behind a one-way mirror. The Shame Game and ADHD. Published on ADDitudeMag.com by William Dodson, M.D. 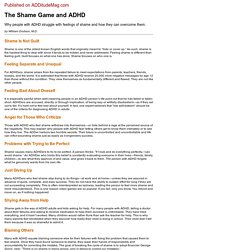 Shame Is Not Guilt Shame is one of the oldest known English words that originally meant to “hide or cover up.” As such, shame is the hardest thing to deal with since it tends to be hidden and never addressed. ADHD Emotions: How They Affect Your Life and Happiness. Published on ADDitudeMag.com by William Dodson, M.D. Emotion Commotion You can’t manage the impairments of ADHD until you understand how you process emotion.

Top 10 Tips for Loving ADD Women. Mobile Site Preview. Information for Women and Girls with ADD (ADHD) Whether you're a woman with ADD or ADHD or the parent of a daughter with the disorder, you have probably struggled to find anyone in your community who understands you or your daughter, someone who has experience in diagnosing or treating ADHD in females. Mid-life Transitions for Women with ADD (ADHD) Kathleen Nadeau, Ph.D. In midlife, a woman with ADD (ADHD) makes major transitions. Biologically, she goes through perimenopause and enters menopause. Interpersonally, family responsibilities are typically waning.

In her fifties, a woman with ADD (ADHD) has new choices before her. Perhaps this is a time to pursue a long-neglected dream - to return to school, to develop a dormant talent, to establish a different lifestyle that is more compatible with her needs as a woman with ADD (ADHD). Information for Women and Girls with ADD (ADHD) CHADD - Nationally recognized authority on ADHD. ADHD and Procrastination: How to Light a Fire Under Your Brain's Butt. How to Survive Winter Weather with Adult ADHD. Winter is stomping on my ADHD brain right now, but I have learned how to cushion the blows. You can, too. Absent-Minded Superhero | posted by Stacey Turis. Procrastination and Time Management Help for Adults with ADHD. How to get your crap done without going crazy. Absent-Minded Superhero | posted by Stacey Turis.

Emotional Intelligence: The Social Skills You Weren't Taught in School.