Brexit - Tea bag analogy. The paranoid fantasy behind Brexit. Before the narrative of Len Deighton’s bestselling thriller SS-GB begins, there is a “reproduction” of an authentic-looking rubber-stamped document: “Instrument of Surrender – English Text. 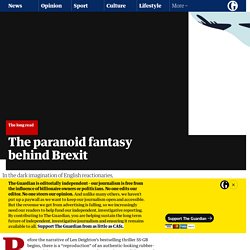 Of all British armed forces in United Kingdom of Great Britain and Northern Ireland including all islands.” It is dated 18 February 1941. After ordering the cessation of all hostilities by British forces, it sets down further conditions, including “the British Command to carry out at once, without argument or comment, all further orders that will be issued by the German Command on any subject. Disobedience of orders, or failure to comply with them, will be regarded as a breach of these surrender terms and will be dealt with by the German Command in accordance with the laws and usages of war.” Russia seeks to capitalise on Brexit after blocking Liam Fox's WTO plan. Russia is among 20 countries that are looking to squeeze a commercial advantage from Brexit after blocking an attempt by the international trade secretary, Liam Fox, to fast-track a World Trade Organization deal on the UK’s terms of trade with the world. 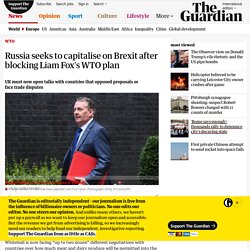 Whitehall is now facing “up to two dozen” different negotiations with countries over how much meat and dairy produce will be permitted into the British market and what tariffs the UK will set on imports. The development will pile pressure on the UK’s already strained resources. The Department for International Trade spent more than £1m on recruitment consultants alone in its first year trying to take on experienced trade negotiators, an area that had previously been left entirely to the EU. No-deal Brexit could raise price of mince by 50%, meat industry says. The price of mince would go up 50% in the event of no Brexit deal, the meat industry has warned. 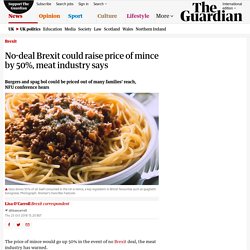 It would push British favourites including burgers, spaghetti bolognese and shepherd’s pie out of the reach of many families and cause budgeting difficulties for nearly all meat-eaters, with data showing 55% of all beef consumed in the UK is mince. “It would be a significant price rise and it’s a valued product to the consumer, not just used in spag bol but also lasagne and koftas,” said Katie Doherty, policy director of the International Meat Trade Association.

Speaking at a National Farmers’ Union conference in London she said no deal would mean huge food inflation, with World Trade Organisation tariffs highest on food products. This is because Britain eats more than twice as much beef as it produces and is highly reliant on imports. Beef imports would be on average 62% more expensive across all cuts, sheep meat up 57%, and pork and poultry up 32% and 31% respectively in a WTO scenario. Brexit explained: we need to talk about tariffs. Amid Brexit chaos, Britain's political system finally implodes. Theresa May surely by now symbolises the phrase "bad day at the office". 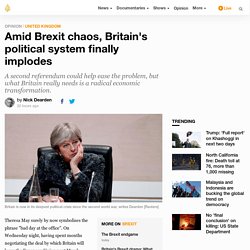 On Wednesday night, having spent months negotiating the deal by which Britain will leave the European Union next March, May had a gruelling five-hour meeting with her cabinet. That evening, she told the nation that agreement had been reached, though with reservations. Those reservations burst into the open the next morning when the minister responsible for negotiating the said deal, Dominic Raab, led a wave of resignations, as May sat for three hours in front of parliament listening to MP after MP from her own party telling her they would oppose the deal. Some called for her to resign. Britain is now in its deepest political crisis since the World War II. How did it come to this? This issue has torn the Conservative Party apart since the fall of Margaret Thatcher, but it came to a head in David Cameron's government. France demands UK climate pledge in return for Brexit trade deal. France is pushing the UK to incorporate future European climate change directives into law automatically in return for an ambitious trade deal with the EU. 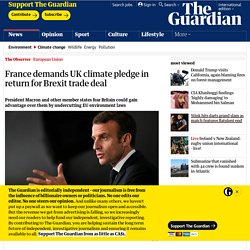 A large number of member states fear that the UK could enjoy an economic advantage after Brexit if it were able to diverge from European laws and regulations, and they want to use their leverage now to force a commitment from future British governments. The demand by Emmanuel Macron for the UK to be tied into the EU’s Paris 2030 targets was just one of a series of interventions made by member states during recent meetings with Michel Barnier and his negotiating team.

May's Proposed Brexit Deal Explained - Explaining Brexit. A no-deal Brexit won’t result in a siege. The EU will be more clinical than that.

20 'Brexit is like...' tweets that are so hilariously British it hurts. Even if Brexit never happens, it's helped people show off their creative writing skills at least. 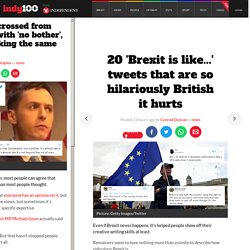 Remainers seem to love nothing more than a simile to describe how ridiculous Brexit is. And because it’s been nearly three years since the referendum, they’ve had to work pretty hard to come up with new ones.