Brexit explained: what happens when the UK leaves the EU? □□□ Brexit, Briefly: REVISITED! □□□ Document 2. Newsroom. Ask Full Fact: your Brexit questions answered. The other week we asked Full Fact's readers to ask us any questions about Brexit—whether it was about the withdrawal agreement, the "divorce bill", Article 50, the prospect of "no deal", or dozens of other topics. 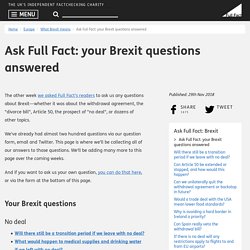 We've already had almost two hundred questions via our question form, email and Twitter. This page is where we'll be collecting all of our answers to those questions. We'll be adding many more to this page over the coming weeks. The UK's EU membership fee. The UK pays more into the EU budget than it gets back. 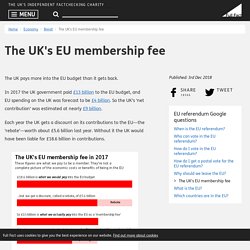 In 2017 the UK government paid £13 billion to the EU budget, and EU spending on the UK was forecast to be £4 billion. So the UK’s ‘net contribution’ was estimated at nearly £9 billion. Each year the UK gets a discount on its contributions to the EU—the ‘rebate’—worth about £5.6 billion last year. Without it the UK would have been liable for £18.6 billion in contributions. The UK doesn’t pay or "send to Brussels" this higher figure of £18.6 billion, or anything equivalent per week or per day. Brexit – What does the rest of the world think? Now Article 50 has been triggered and negotiations are about to commence, we ask: what does the rest of the world think about Brexit?

It feels like a decade has passed since 23 June, despite it only being nine months ago. A period packed with debates, speculation, fake news and not much clarity on what Brexit actually means. But, at last, 29 March has been and gone. Brexit: Battle for Britain? Brexit explained: what happens when the UK leaves the EU? Battle for Brexit: What does Europe think? 英脫歐協議本週再次表決 結果仍難看好. 英國脫歐鬧不完 帶你看歐盟法律如何制定. Brexit: small business advice and help. Home - Prepare for Brexit. EI Learn. Brexit Business Checklist. Enterprise Ireland launches 'Brexit SME Scorecard' to help companies self-assess readiness for Brexit. 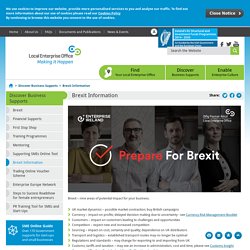 UK market dynamics – possible market contraction; buy British campaignsCurrency – impact on profits; delayed decision making due to uncertainty - see Currency Risk Management BookletCustomers – impact on customers leading to challenges and opportunitiesCompetition – expect new and increased competitionSourcing – impact on cost, certainty and quality; dependence on UK distributorsTransport and logistics – established transport routes may no longer be optimalRegulations and standards – may change for exporting to and importing from UKCustoms, tariffs and taxation – may see an increase in administration, cost and time, please see Customs Insight Course and The InterTradeIreland Start To Plan Voucher SchemeMovement of people – possible restrictions Your Local Enterprise Office has a range of supports to help you to address issues and maximise potential opportunities, click here to discover Brexit Supports.

Getting Business Brexit Ready - DBEI. As it stands, the UK is scheduled to leave the European Union as of 11pm on Friday, 29 March 2019. 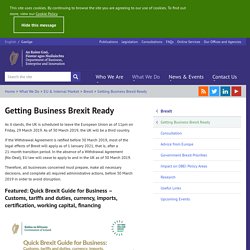 As of 30 March 2019, the UK will be a third country. If the Withdrawal Agreement is ratified before 30 March 2019, most of the legal effects of Brexit will apply as of 1 January 2021, that is, after a 21-month transition period. In the absence of a Withdrawal Agreement (No-Deal), EU law will cease to apply to and in the UK as of 30 March 2019. Therefore, all businesses concerned must prepare, make all necessary decisions, and complete all required administrative actions, before 30 March 2019 in order to avoid disruption. Featured: Quick Brexit Guide for Business – Customs, tariffs and duties, currency, imports, certification, working capital, financing. The Impact of Brexit on UK Businesses.

Posted by: Dr Aftab Dean It is over a year since the referendum vote signalled the start of Brexit, and in that time UK businesses have experienced mixed fortunes. 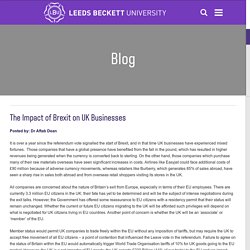 Those companies that have a global presence have benefited from the fall in the pound, which has resulted in higher revenues being generated when the currency is converted back to sterling. On the other hand, those companies which purchase many of their raw materials overseas have seen significant increases in costs. Airlines like Easyjet could face additional costs of £90 million because of adverse currency movements, whereas retailers like Burberry, which generates 85% of sales abroad, have seen a sharp rise in sales both abroad and from overseas retail shoppers visiting its stores in the UK. ​How Brexit could affect UK startups. Brexit – advice for your business – New Anglia Local Enterprise Partnership (LEP) for Norfolk & Suffolk. Brexit Is Already Affecting UK Businesses — Here’s How.

Executive Summary To help better understand the uncertainties created by Brexit, a team from the Bank of England, University of Nottingham, and Stanford University has been running the Decision Maker Panel, a survey of around 7,500 business executives in the UK. 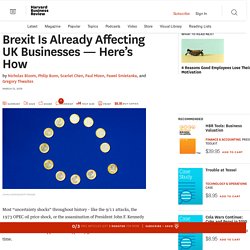 The team found that Brexit has been an important source of uncertainty for many UK businesses. They estimate that this led to a 6% reduction in investment in the first two years after the referendum, with employment also around 1.5% lower. And Brexit is likely to reduce future UK productivity by around half a percentage point via a batting average effect of output being reallocated away from higher productivity firms toward lower productivity ones. Impact of Brexit on Businesses in the UK. In a historic referendum on June 23rd, 2016, Britain voted to leave the European Union. After which, the pound fell to its lowest since 1985, immediately after the result was declared. The UK is considered one of the best countries to start a business, but that could change due to the unknown effects Brexit could bring. There are Brexit campaigners who have optimistic predictions for Britain and its businesses. But there are still many sceptics who predict that this has been a big mistake for Britain, and that it will be seriously impacted by multiple factors.

Is your business ready for Brexit? Brexit: Banks are moving $1 trillion out of the UK. Banks and other financial companies have shifted at least £800 billion ($1 trillion) worth of assets out of the country and into the European Union because of Brexit, EY said in a report published Monday. 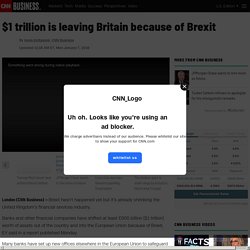 Many banks have set up new offices elsewhere in the European Union to safeguard their regional operations after Brexit, which means they also have to move substantial assets there to satisfy EU regulators. Other firms are moving assets to protect clients against market volatility and sudden changes in regulation. Brexit: business, economy and finance. Economy Budget 2018Treasury Committee report, 12 February 2019Says it is not credible for the Chancellor to refer to a 'deal dividend' – a boost to economic growth once a withdrawal deal has been agreed. 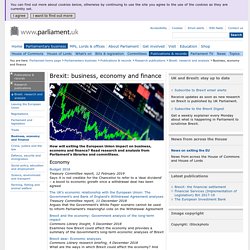 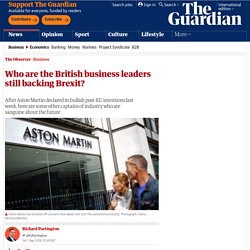 But amid the warnings over jobs losses, withheld investments, weaker economic growth and political unrest, some captains of industry are more sanguine. Last week, Aston Martin shrugged off concerns over Brexit damaging the British car industry and announced its flotation plans, while household appliance maker Dyson has earmarked a £200m expansion of its research campus to test electric cars, with enough space for 2,000 people. Here are some of the British business figures who believe Brexit will not be negative for the economy. Sir James Dyson.

BREXIT and the impact on British and European companies - Giambrone Law. The result of the British referendum has shocked the whole world. 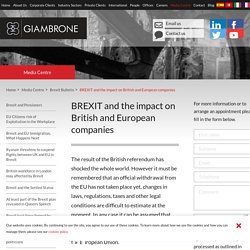 However it must be remembered that an official withdrawal from the EU has not taken place yet, changes in laws, regulations, taxes and other legal conditions are difficult to estimate at the moment. In any case it can be assumed that these changes would lead to additional costs and work efforts for both sides, the UK and the European Union.

Experts have estimated the trade volume (mostly import/export of goods and commodities) between the United Kingdom and the EU to about 1196 billion euros before exit. In terms of subsidiaries, there are estimated 1,300 German subsidiaries in the UK and 25,000 British companies with a branch in Germany with an overall of 2.6 million jobs. In a worst case scenario, the UK leaving the European Market will likely mean that UK companies will no longer be able to get into EU-market on a cross-border or branch basis and vice versa. Conclusions. KPMG Enterprise Brexit. Brexit: A Guide for Your Business. 法蘭克福搶倫敦的飯碗，誰才是下一個歐洲金融中心？｜國際｜歐洲｜2018-07-16｜天下雜誌第652期. 兩年前的脫歐公投，不僅為英國與歐盟同行畫下句點，也揭開了歐洲金融中心的競技賽。