21 Quotes From Ram Dass For Anyone Who Needs A Spiritual Pick-Me-Up. The ancient connections between atheism, Buddhism and Hinduism — Quartz India. A group of atheists and secularists recently gathered in Southern California to talk about social and political issues. 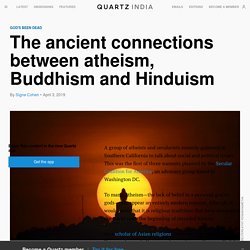 This was the first of three summits planned by the Secular Coalition for America, an advocacy group based in Washington DC. To many, atheism—the lack of belief in a personal god or gods—may appear an entirely modern concept. After all, it would seem that it is religious traditions that have dominated the world since the beginning of recorded history. Thich Nhat Hanh’s final mindfulness lesson: how to die peacefully. Thich Nhat Hanh has done more than perhaps any Buddhist alive today to articulate and disseminate the core Buddhist teachings of mindfulness, kindness, and compassion to a broad global audience. 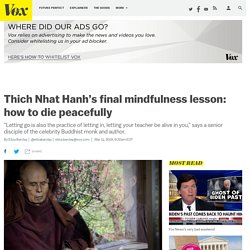 The Vietnamese monk, who has written more than 100 books, is second only to the Dalai Lama in fame and influence. Nhat Hanh made his name doing human rights and reconciliation work during the Vietnam War, which led Martin Luther King Jr. to nominate him for a Nobel Prize. He’s considered the father of “engaged Buddhism,” a movement linking mindfulness practice with social action. He’s also built a network of monasteries and retreat centers in six countries around the world, including the United States.

How to find your own truth: According to Joseph Campbell & Alan Watts. Joseph Campbell's monomyth as a guide to finding one's self.Alan Watts explores the notion of symbolically returning to the forest. How to set ones own meaning in a world of confusion and chaos. Joseph Campbell's life work covered a wide range of the communal human experience. Campbell explored the various mythologies of our planet and managed to elucidate on the common threads between them all. He's popularly known for coining the concept of the hero's journey, or monomyth, which is a narrative cycle that is found to some degree in all great legends and stories around the world.

This topic of discussion in an influential television series with journalist Bill Moyers brought Campbell's idea further into the mainstream posthumously in the latter half of the 20th century. Quantum Theory Proves That Consciousness Moves To Another Universe After Death. A book titled “Biocentrism: How Life and Consciousness Are the Keys to Understanding the Nature of the Universe” has stirred up the Internet, because it contained a notion that life does not end when the body dies, and it can last forever. 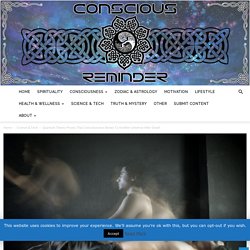 The author of this publication, scientist Dr. Robert Lanza who was voted the 3rd most important scientist alive by the NY Times, has no doubts that this is possible. Beyond time and space Lanza is an expert in regenerative medicine and scientific director of Advanced Cell Technology Company. Before he has been known for his extensive research which dealt with stem cells, he was also famous for several successful experiments on cloning endangered animal species. Lanza points to the structure of the universe itself, and that the laws, forces, and constants of the universe appear to be fine-tuned for life, implying intelligence existed prior to matter.

The theory implies that death of consciousness simply does not exist. Multiple worlds Soul. Scientists Now Believe That The Universe Itself Is Conscious. I Can Heal Water: A Star Child Speaks, Calls for Humanity to Wake Up. I received the following email about a nine-year-old from Northern Europe who speaks about her ability to ‘heal’ water through star languages. 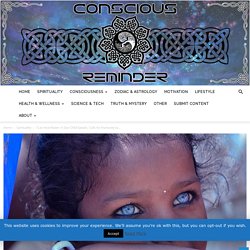 She also gives her perspective on God and her Mission: “Poor us. poor kids who come to volunteer; we have such a difficult time ahead of us, a real fight. I am here to help my family ‘wake up,’ EVERYONE is sleeping.” If Any Of These 15 Animals Cross Your Path, You’re Being Contacted From ‘Above’ - Conscious Reminder. When certain animals cross our paths they want to give a certain message. 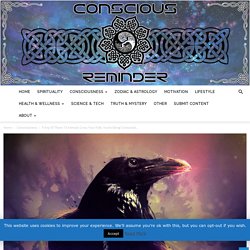 Several Native American tribes believed that each animal held it’s own message and piece of information. The om symbol meaning, decoded by an expert. What Science Tells Us About Near-Death Exeriences. In our never-ending quest to understand what happens to us after we die, humans have long seen the rare phenomenon of near-death experiences as providing some hints. 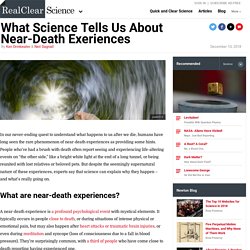 People who’ve had a brush with death often report seeing and experiencing life-altering events on “the other side,” like a bright white light at the end of a long tunnel, or being reunited with lost relatives or beloved pets. But despite the seemingly supernatural nature of these experiences, experts say that science can explain why they happen – and what’s really going on. What are near-death experiences? A near-death experience is a profound psychological event with mystical elements. It typically occurs in people close to death, or during situations of intense physical or emotional pain, but may also happen after heart attacks or traumatic brain injuries, or even during meditation and syncope (loss of consciousness due to a fall in blood pressure).

Why do near-death experiences happen? Eight Books Every Spiritual Seeker Should Read. 6 Simple Steps How To Recharge Your Spiritual Energy Using Your Hands.