LA / Downtown – Belcampo. This Week's Featured City: Los Angeles. All Time – Café Review. Tell us about your first impressions when you arrived. 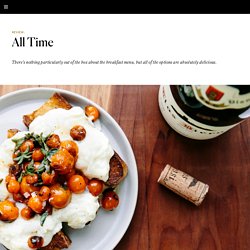 While it may be home to some of the city's A-listers, Los Feliz has suffered from a dearth of great restaurants up until the last year or so. The chief example of this improvement is All Time, a low-key all-day cafe whose seating skews heavy on the patio area. There's nothing fussy about the design, just bleached wood and some cute checkered tiles. The focus here is on the food. What was the crowd like? Homepage - All Time Los Angeles. Guerrilla Tacos – Restaurant Review. Tell us about your first impressions when you arrived. 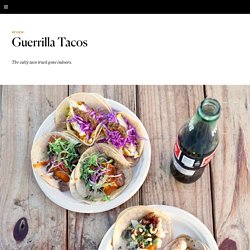 Restaurant. FIDM Museum and Galleries » FIDM/Fashion Institute of Design and Merchandising. Five Places to Go in Los Angeles. Highland Park in Los Angeles has long been a diverse and vibrant community. 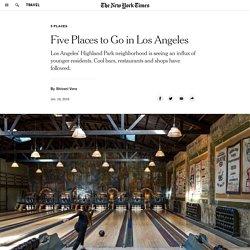 In the last few years, however, 20- and 30-somethings, lured by the neighborhood’s affordable rents and proximity to downtown Los Angeles, have moved in and are giving local entrepreneurs a new incentive to open new restaurants, bars and boutiques. Many are on old Figueroa Street, now a vibrant thoroughfare full of pedestrians. 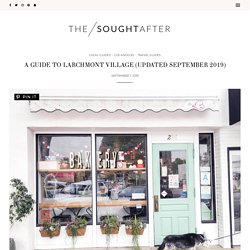 As long as I call myself an Angeleno, I hope I never have to leave this side of town. Bordering Hollywood, Hancock Park, and Korea Town, historic Larchmont Village is within walking distance of my house and my office, and is one of the most charming neighorhoods in LA. Hidden Gems in the San Fernando Valley. A Walking Tour of Larchmont Village. Hinoki & the Bird. Welcome. Blue Daisy – Brunch & Dinner. Theatres: All Listings - NoHo Arts District. NoHo Tours | Advertise | eNews View All Discounts. 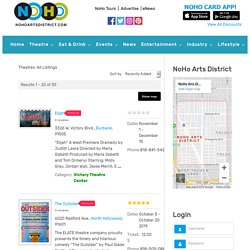 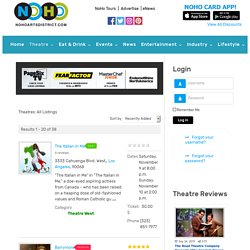 101 things to love about Los Angeles. Like LA’s position between the steep, granite peaks of the San Gabriel Mountains and the unbounded Pacific Ocean, the city’s reputation is stuck between Valley Girl vapidity and a sun-kissed bohemia. 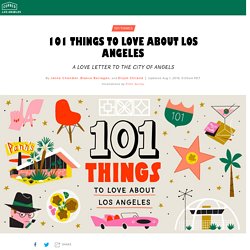 Those who call Los Angeles home know which of those stereotypes is true. Yes, the weather is perfect. But there are so many more under-the-radar reasons why people love the City of Angels—moments, places, and experiences that make living here so pleasant and unbelievably magical that sometimes it’s hard to tell whether you’re still alive or have died and gone to heaven.

A guide to North Hollywood and the NoHo Arts District. Once a gritty suburb, North Hollywood has transformed into the Valley's go-to cultural hub over the last decade with an influx of dance studios, art galleries and acting workshops—and still no shortage of strip malls. First off, you should know that North Hollywood and Hollywood are not next to each other; it's named in such a way so that you forget there's a mountain range separating the Valley neighborhood from Tinseltown. Instead you'll find the neighborhood between the 134 and 170 freeways, a couple of miles north of Toluca Lake and Universal Studios with Burbank to the east and San Fernando Valley suburbs like Valley Village and Valley Glen to the west. You'll find most of the retail activity along the triangle of streets between Lankershim Boulevard and Vineland Avenue—otherwise known as the NoHo Arts District.

That area is served by a Metro stop at its northern end. But you'll find bars, shops, restaurants and more things to do all over the neighborhood. Fred62. Cafe 50’s - CLOSED - Order Online - 366 Photos & 527 Reviews - Diners - East Hollywood - Los Angeles, CA - Phone Number - Menu. Continental Bakery. Sqirl. Roscoe's House Of Chicken And Waffles. Manuela — at Hauser & Wirth – 907 E 3rd St. Los Angeles, CA 90013. 10 Amazing Armenian Restaurants in Los Angeles. Due to the fact that Armenia is wedged between Europe, the Caucasus and the Middle East, the food can be a little confusing. 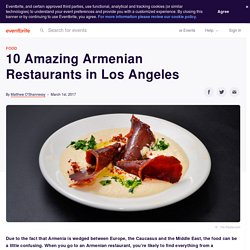 When you go to an Armenian restaurant, you’re likely to find everything from a Mediterranean salad to kebobs to Russian borscht on the menu. Perhaps this confusion is what leads many Armenian restaurants to call their food Russian-Armenian, Lebanese-Armenian, or simply Mediterranean. In some cases, you may not even realize that your local kebob store also offers many delicious Armenian treats. There’s no doubt that the kebob is the most popular Armenian export in LA. While I’ve included some excellent kebobs on this list, I’ve tried to focus on places where you can try Armenian delicacies that are a little less common. Here are 10 amazing places to enjoy Armenian food in Los Angeles. 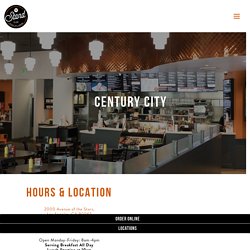