What Happened To The Singer Of Feliz Navidad? According to Feliciano's official website, 2018 saw the legendary singer celebrate his "Golden Anniversary" — 50 years on from 1968 where the Puerto Rican had two key developments in his career. 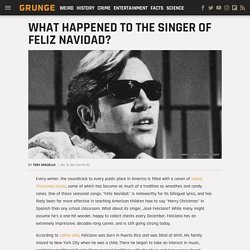 The first was his international breakthrough, a cover of The Doors' "Light My Fire," with the second being his then-controversial rendition of "The Star-Spangled Banner. " During the 1968 World Series, he became the first singer to stylize his rendition of the national anthem. The anniversary celebration saw Feliciano perform in several continents, including multiple concerts in his native Puerto Rico, and speak at the Smithsonian Museum of American History, where he donated one of his guitars. Feliciano is still recording and working on projects, releasing an album in 2020 and developing a documentary and book based on his remarkable life. Youtube. Foreigner REACTS to Puerto Rican Life. Youtube. Puerto Rico Update: Colonial status is challenged; Political Significance. Why Some Black Puerto Ricans Choose ‘White’ on the Census. “For visual reasons, yes, I consider myself black,” he said. 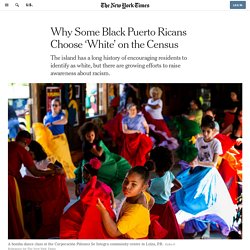 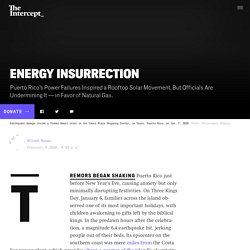 On Three Kings Day, January 6, families across the island observed one of its most important holidays, with children awakening to gifts left by the biblical kings. In the predawn hours after the celebration, a magnitude 6.4 earthquake hit, jerking people out of their beds. Its epicenter on the southern coast was mere miles from the Costa Sur power plant, which provides about a quarter of the island’s electricity by burning natural gas and oil. Deal reached to cut bankrupt Puerto Rico's debt by $24 billion. YouTube. Puerto Rico earthquake today: 4.5-magnitude hits amid rare seismic activity. A 4.5-magnitude earthquake hit Puerto Rico on Thursday in the latest of a rare string of quakes that has frightened many in the U.S. territory. 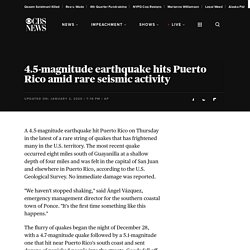 The most recent quake occurred eight miles south of Guayanilla at a shallow depth of four miles and was felt in the capital of San Juan and elsewhere in Puerto Rico, according to the U.S. Geological Survey. No immediate damage was reported. "We haven't stopped shaking," said Ángel Vázquez, emergency management director for the southern coastal town of Ponce. Puerto Ricans' Miss Universe response shows racism isn't just for white people.

Thousands of Puerto Ricans glued themselves to their various screens last week to watch what is a national sport. 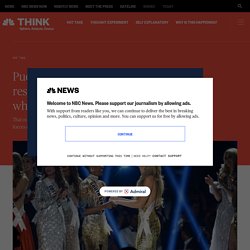 But it wasn't baseball, the other national obsession; it was the Miss Universe pageant. While it is true that Miss Universe is seen in the United States and in Europe as anachronistic and frankly a bit embarrassing, in Puerto Rico it is a reaffirmation of national identity and national pride. In short, for an island colonized and deeply divided by political ideologies, the pageant unites all Puerto Ricans under one banner — Miss Puerto Rico. Want more articles like this? Sign up for the THINK newsletter to get updates on the week's most important cultural analysis Most of them hoped to see Miss Puerto Rico, Madison Anderson Berríos (who doesn't use her last name in competition) capture a sixth crown for the island. “To be Puerto Rican, it is carried in your blood and heart. Get the think newsletter. And it was not only the usual social media trolls. 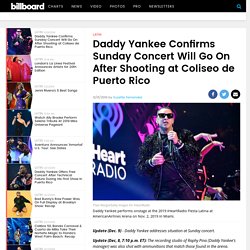 Update (Dec, 8, 7:10 p.m. ET): The recording studio of Raphy Pina (Daddy Yankee’s manager) was also shot with ammunitions that match those found in the arena. The show must go on, and Daddy Yankee knows it. The reggaeton superstar has confirmed that Sunday’s (Dec. 8) concert will happen after a shooting at Coliseo de Puerto Rico was reported hours after his show on Saturday night (Dec. 7).

New research links ancient indigenous DNA to living Puerto Ricans. How to fix Puerto Rico's power system. Months after Hurricane Maria struck Puerto Rico, most of the island’s population is still without power, an unprecedented outcome for a territory in the world’s most advanced nation. 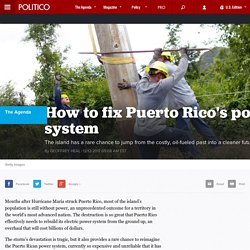 The destruction is so great that Puerto Rico effectively needs to rebuild its electric power system from the ground up, an overhaul that will cost billions of dollars. The storm’s devastation is tragic, but it also provides a rare chance to reimagine the Puerto Rican power system, currently so expensive and unreliable that it has become a major obstacle to the island’s economic growth.

Instead of rebuilding its current system, based heavily on outdated oil-burning plants, Puerto Rico should take advantage of the island’s geographic position, recent technological advancements and billions of dollars in federal funding to rebuild its future around renewable energy. Such an overhaul would deliver cheap, reliable energy to Puerto Rico’s residents and businesses for a generation.

Puerto Rico Has Just Passed Its Own Green New Deal. Puerto Rico has passed a bill to radically transform the island's economy with renewable energy as the central pillar. 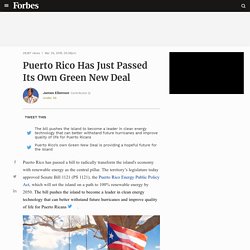 The territory’s legislature today approved Senate Bill 1121 (PS 1121), the Puerto Rico Energy Public Policy Act, which will set the island on a path to 100% renewable energy by 2050. The bill pushes the island to become a leader in clean energy technology that can better withstand future hurricanes and improve quality of life for Puerto Ricans . Renewable energy has the potential to revolutionize the economy of Puerto Rico. Getty ↪ Read Also: Under Trump's Tariffs, The US Lost 20,000 Solar Energy Jobs Receiving widespread political support, PS 1121 passed with bi-partisan support with 21 votes to 4 in the Puerto Rican Senate.

Tough questions from @andersoncooper asking why #PuertoRico’s green energy bill #PS1121 keeps getting delayed. Here's Why Puerto Rico Is Part of the U.S. — Sort Of. Yahoo fait dÃ©sormais partie dâOath. WASHINGTON (AP) — President Donald Trump on Monday declared himself an "absolute no" on statehood for Puerto Rico as long as critics such as San Juan's mayor remain in office, the latest broadside in his feud with members of the U.S. territory's leadership. 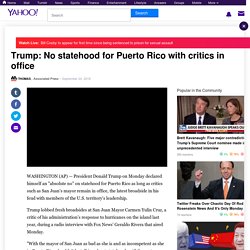 Trump lobbed fresh broadsides at San Juan Mayor Carmen Yulín Cruz, a critic of his administration's response to hurricanes on the island last year, during a radio interview with Fox News' Geraldo Rivera that aired Monday. Puerto Rico: The exodus after Hurricane Maria. Puerto Rican town that wrote 'S.O.S.' after Maria has new message. One desperate. 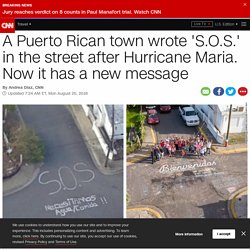 One hopeful. What a difference a year makes. Donations sent to Puerto Rico were found rotting in parking lot. Donated food sent to Puerto Rico in the aftermath of Hurricane Maria were left to rot in a parking lot of a government facility, CBS News corresondent David Begnaud reported Friday. Additionally, about 10 containers filled with non-perishable supplies sat at the government facility for 11 months. Video of supplies covered in rodent droppings was first posted by a Puerto Rican radio station Radio Isla on Thursday. When Begnaud visited, the trailers with the containers were locked Friday.

FEMA says it underestimated the devastation Hurricane Maria would have on Puerto Rico The National Guard said in a statement the donations that were highlighted were not distributed because they were expired. Nicolás Gautier, an official at the facility, told CBS News one of of the containers had "food for dogs, and apparently several of the boxes were broken. The goods were at Puerto Rico's elections commission, which has been serving as a collection site for donations. © 2018 CBS Interactive Inc. Supplies sent to Puerto Rico found abandoned. Puerto Rico says Hurricane Maria death toll may surpass 1400. Flag of Puerto Rico.

In Caguas, south of San Juan, Puerto Rico, Jared Haley is fighting a daily battle at C-Axis, the medical device manufacturer where he's the general manager. Operating on emergency generators, the plant restarted operations last month and, Haley says, is delivering all its work on schedule. Not now. YouTube. Eu.usatoday. The CDC says people who are fully vaccinated may get together with other fully vaccinated individuals in small groups without masks. USA TODAY Consuelo Hermosillo’s 22-year-old granddaughter didn’t want to get a COVID-19 vaccine. The office worker at a special needs center was afraid the shot would prevent her from ever getting pregnant. Youtube. Youtube. What Race are People from the Hispanic Caribbean (Genetics of Puerto Rico, Cuba, Dominican Republic)

'Puerto Rican Mike Tyson' Shockingly Wants To End 16 First-Round Knockout Streak. Edgar Berlanga has extended his first-round knockout streak to 16 last DecemberThe "Puerto Rican Mike Tyson" wants to prove that he can also boxDavid Benavidez is open to fighting his fellow undefeated boxer Super middleweight knockout artist Edgar Berlanga has grown tired of stopping his opponents in the first round. Berlanga’s incredible professional boxing record has made him one of today’s most exciting prospects. All of the undefeated prodigy’s wins came by way of first-round knockout and he had just extended his collection to 16 last December after stopping Ulises Sierra. However, Berlanga, who previously revealed that people regard him as “Puerto Rican Mike Tyson,” vowed to prove that he’s not just about raw power.

According to the 23-year-old, he wants to reach the succeeding rounds of his next fight by hopefully not knocking his opponent out cold once again in the opening round. “I’m looking forward to doing four fights,” he added. Puerto Rico Taino Symbols Poster Canvas - Wall Art Decor - Cadadesigns. Are you looking for a special gift for your family/friends/lover/yourself?