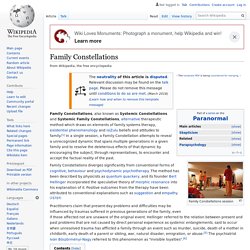 Family Constellations diverges significantly from conventional forms of cognitive, behaviour and psychodynamic psychotherapy. The method has been described by physicists as quantum quackery, and its founder Bert Hellinger incorporated the speculative theory of morphic resonance into his explanation of it. Conceptual basis[edit] Family Constellations take their form from family systems psychology. Second Brain Found in Heart Neurons - Trust Your Gut Feelings. The idea of transplanted cellular memory emerged as early as 1920 in the film "Les Mains d'Orleac" written by science fiction writer Maurice Renard. 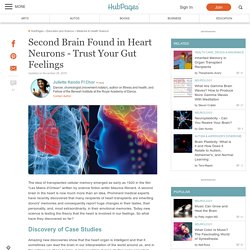 A second brain in the heart is now much more than an idea. Prominent medical experts have recently discovered that many recipients of heart transplants are inheriting donors' memories and consequently report huge changes in their tastes, their personality, and, most extraordinarily, in their emotional memories. Today new science is testing the theory that the heart is involved in our feelings. So what have they discovered so far? Discovery of Case Studies Amazing new discoveries show that the heart organ is intelligent and that it sometimes can lead the brain in our interpretation of the world around us, and in the actions we chose to take. Meeting Donor's Family Upon meeting their donors' families, the heart transplant patients' hunches were confirmed: the new personality traits had indeed been passed on from their donors.

Neurologist Dr. 2nd Brain Found in the Heart - Trust your Gut Feelings. The Work of Disagreeing with Those Who Are Similar to Us. Everywhere you look these days, progressive America is trying to convince its brethren to reach across the aisle and talk to those unlike them. 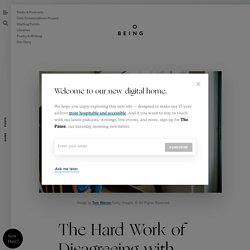 Spaceship Media puts a journalist in a chat room along with people from different parts of the country to have a mediated conversation complete with independent fact-checking. Living Room Conversations gathers people with different ideas about things like climate change and housing and guides them to explore their differences and common ground. The Aspen Institute and Facing History and Ourselves has just launched the Better Arguments Project, which will travel to communities through out the country to guide citizens in talking about something controversial without devolving into shouting and stalemates. These are all deeply worthwhile efforts. Surely the preponderance of smug progressivism must be addressed with some real, sobering conversation.

You know what feels hellishly hard to navigate? Internal - For DiEM25 Members Only. Democracy in Europe Movement 2025. Pan-European political project DiEM25 argues that the opportunity to create political organisations at a pan-European level needs to be seized. 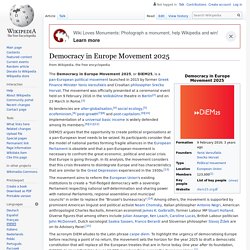 Its participants consider that the model of national parties forming fragile alliances in the European Parliament is obsolete and that a pan-European movement is necessary to confront the great economic, political and social crisis that Europe is going through. In its analysis, the movement considers that this crisis threatens to disintegrate Europe and has characteristics that are similar to the Great Depression experienced in the 1930s.[13] The acronym DiEM alludes to the Latin phrase carpe diem.

To highlight the urgency of democratising Europe before reaching a point of no return, the movement sets the horizon for the year 2025 to draft a democratic constitution that will replace all the European treaties that are in force today. Agenda[edit] DiEM25 seeks to create a more democratic Europe. Structure[edit] The Advisory Board advises DiEM25. 6 Powerful Communication Tools for Satisfying Relationships. Source: Crew/Unsplash The couples that I see in my practice often come in for the same types of problems. 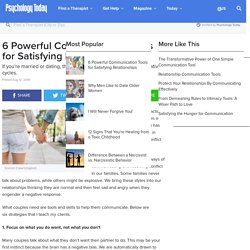 Their communication has broken down, or they are stuck in negative cycles of escalating conflict rather than resolving it. article continues after advertisement Most of us didn’t learn healthy ways of communicating and resolving conflict in our families. Some families never talk about problems, while others might be explosive. What couples need are tools and skills to help them communicate.