Mind Uploading: Brain Facts. What does the spike in the Schumann resonance mean? – Dr. Joe Dispenza’s Blog. In 1952, German physicist and professor W.O. 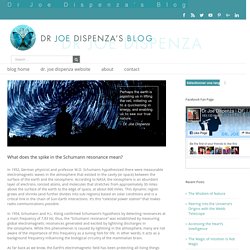 Schumann hypothesized there were measurable electromagnetic waves in the atmosphere that existed in the cavity (or space) between the surface of the earth and the ionosphere. According to NASA, the ionosphere is an abundant layer of electrons, ionized atoms, and molecules that stretches from approximately 30 miles above the surface of the earth to the edge of space, at about 600 miles. This dynamic region grows and shrinks (and further divides into sub-regions) based on solar conditions and is a critical link in the chain of Sun-Earth interactions. 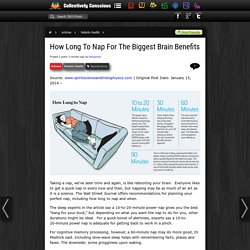 Everyone likes to get a quick nap in every now and then, but napping may be as much of an art as it is a science. The Wall Street Journal offers recommendations for planning your perfect nap, including how long to nap and when. New Study Shows Lack Of Sleep May Shrink Your Brain. Source: www.themindunleashed.org | Original Post Date: September 26, 2014 – A new study suggests that lack of night sleep might affect how fast the brain’s gray matter shrinks, particularly in people older than 60. 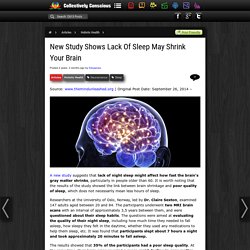 It is worth noting that the results of the study showed the link between brain shrinkage and poor quality of sleep, which does not necessarily mean less hours of sleep. Researchers at the University of Oslo, Norway, led by Dr. Depression Damages Parts Of The Brain, Research Concludes. Source: www.theconversation.com | Original Post Date: June 30, 2015 – Brain damage is caused by persistent depression rather than being a predisposing factor for it, researchers have finally concluded after decades of unconfirmed hypothesizing. 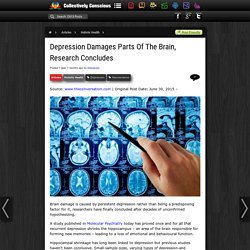 A study published in Molecular Psychiatry today has proved once and for all that recurrent depression shrinks the hippocampus – an area of the brain responsible for forming new memories – leading to a loss of emotional and behavioural function. Ground Breaking Neuroscience: 5 Things We Learned About The Brain In 2015. Source: www.iheartintelligence.com | Original Post Date: January 21, 2016 – 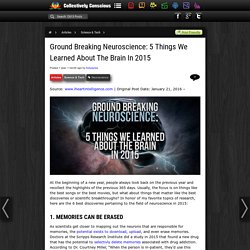 Children are naturally prone to be empathic and moral. Related images(click to enlarge) University of Chicago Children between the ages of seven and 12 appear to be naturally inclined to feel empathy for others in pain, according to researchers at the University of Chicago, who used functional Magnetic Resonance Imaging (fMRI) scans to study responses in children. 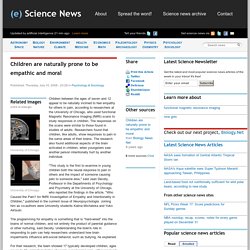 The responses on the scans were similar to those found in studies of adults. Researchers found that children, like adults, show responses to pain in the same areas of their brains. The research also found additional aspects of the brain activated in children, when youngsters saw another person intentionally hurt by another individual. "This study is the first to examine in young children both the neural response to pain in others and the impact of someone causing pain to someone else," said Jean Decety, Professor in the Departments of Psychology and Psychiatry at the University of Chicago, who reported the findings in the article, "Who Caused the Pain? Teste Gratuito de Personalidade. Your Brain Has A DELETE Button And Here's How To Use It! There’s an old saying in neuroscience: “neurons that fire together wire together.”

This means the more you run a neuro-circuit in your brain, the stronger that circuit becomes. This is why, to quote another old saw, “practice makes perfect”. 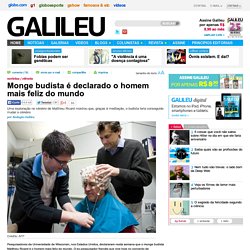 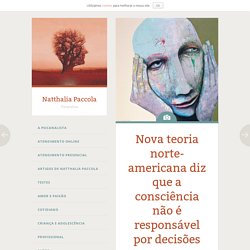 Researchers Find Out How a New Concept Makes Its Way into the Brain. Carnegie Mellon University (CMU) scientists have documented the formation of a newly learned concept inside the brain and found that it occurs in the same brain areas for everyone. Se colocando no lugar do outro. Intuition May Reveal Where Expertise Resides in the Brain. In the instant before he drove Kuang's sting through the base of the first tower, he attained a level of proficiency exceeding anything he'd known or imagined.

Beyond ego, beyond personality, beyond awareness, he moved, Kuang moving with him, evading his attackers with an ancient dance, Hideo's dance, grace of the mind-body interface granted him, in that second, by the clarity and singleness of his wish to die. Gut Feelings. Have you ever had a "gut feeling" about something that's later turned out to be true? Have you ever felt "open-hearted"? Ever encountered a situation that's made you "hot under the collar"? Or a person who is "a pain in the neck"?

Hacking The Nervous System. One nerve connects your vital organs, sensing and shaping your health. If we learn to control it, the future of medicine will be electric. Why Men And Women Think Differently. This Guy Nails It. How-to-control-your-dreams-infographic.jpg (JPEG Image, 850 × 7186 pixels) - Scaled (13%) Daniel Dennett on Tools To Transform Our Thinking. The 6 Most Fascinating Studies on Consciousness. Share this image on your site <p><strong>Please include attribution to with this graphic. The 12 cognitive biases that prevent you from being rational. The Psychology of Color [Infographic] 11378224_559639980842030_934495259_n.jpg (JPEG Image, 640 × 640 pixels) Gardner's Multiple Intelligences.

Howard Gardner of Harvard has identified seven distinct intelligences. This theory has emerged from recent cognitive research and "documents the extent to which students possess different kinds of minds and therefore learn, remember, perform, and understand in different ways," according to Gardner (1991). According to this theory, "we are all able to know the world through language, logical-mathematical analysis, spatial representation, musical thinking, the use of the body to solve problems or to make things, an understanding of other individuals, and an understanding of ourselves. Fronteiras do Pensamento. Imagination and Reality Flow in Opposite Directions in the Brain. As real as that daydream may seem, its path through your brain runs opposite reality. Aiming to discern discrete neural circuits, researchers at the University of Wisconsin-Madison have tracked electrical activity in the brains of people who alternately imagined scenes or watched videos.