The 5 things your kids will remember abot you - Recherche Google. The best of world literature, chosen by Guardian readers. Learn how to memorise anything with this easy visual trick. Have trouble remembering your mum’s birthday? 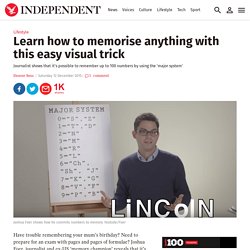 Need to prepare for an exam with pages and pages of formulae? Joshua Foer, journalist and ex-US ‘memory champion’ reveals that it’s possible to memorise just about anything, as long as you transform the number or letters into something you can visualise first. 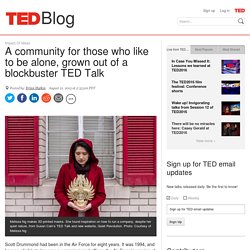 She found inspiration on how to run a company, despite her quiet nature, from Susan Cain’s TED Talk and new website, Quiet Revolution. Photo: Courtesy of Melissa Ng Scott Drummond had been in the Air Force for eight years. It was 1994, and he was eligible to become a commissioned officer, the Air Force’s version of a manager. The average person gets the job after three interviews. Kubas nächste Revolution. Ungoverned Spaces in the Americas, Part I. Southern Pulse examines those areas of Latin America where there is no state presence, and transnational criminal organizations are able to thrive. 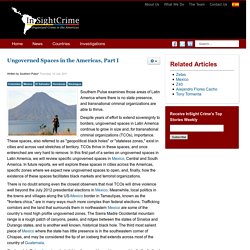 Despite years of effort to extend sovereignty to borders, ungoverned spaces in Latin America continue to grow in size and, for transnational criminal organizations (TCOs), importance. On Marrying the Wrong Person. Anyone we might marry could, of course, be a little bit wrong for us. 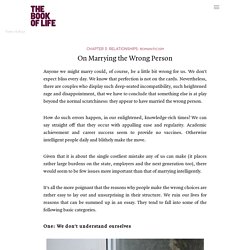 We don’t expect bliss every day. Sadie Frost talks to Bryony Gordon about healthy living, postnatal depression and turning 50. Dear Future Generations: Sorry, We Messed Up the World. When Multilateralism Met Realism — and Tried to Make an Iran Deal. President Barack Obama’s Aug. 6 speech on Iran, notable for its “my way or war” polemics, signals a hardening of the debate over the Iran nuclear agreement, known as the Joint Comprehensive Plan of Action, or JCPOA, just as Congress begins reviewing the deal. 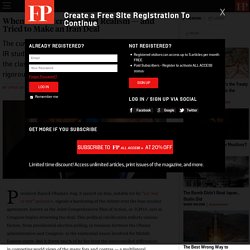 This political calcification reflects various factors, from presidential election polling, to tensions between the Obama administration and Congress, to the existential issues involved for Middle Eastern states. President Obama Is Going to Alaska. Here's Why: 100 Pieces of Advice from 100-Year-Olds. Northern lights hotels: where to watch the aurora borealis. Cuban five documentary.

Youth Culture in the New Cuba. Crown Jewel of Cuba’s Coral Reefs. Explicit cookie consent. ON A snow-covered bluff overlooking the Sheboygan river stands the Waelderhaus, a faithful reproduction of an Austrian chalet. 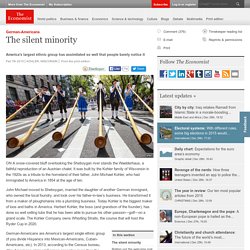 It was built by the Kohler family of Wisconsin in the 1920s as a tribute to the homeland of their father, John Michael Kohler, who had immigrated to America in 1854 at the age of ten. John Michael moved to Sheboygan, married the daughter of another German immigrant, who owned the local foundry, and took over his father-in-law’s business. Why Greece Matters for Everyone. Greece’s economy is in ruins. 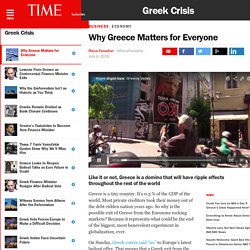 It is hard to imagine how things could have gone worse. Banks closed, no liquidity, very high unemployment, businesses closing down or fleeing the country, and the brain drain is accelerating. And now the Greek people have voted No in a referendum that some cast as being about whether they would remain in the eurozone – though many were unclear about what exactly the vote meant. What it certainly means is that the Greek people are deeply wounded by the prolonged recession of the last six years. As Greek Prime Minister Alexis Tsipras heads back to the negotiating table in hopes of securing a new deal to save his country, he will go without his controversial finance minister, Yanis Varoufakis, who resigned a day after the vote. Charleston, July 4th, and the Transatlantic Slave Trade. We hold these truths to be self-evident, that all men are created equal, that they are endowed by their Creator with certain unalienable Rights, that among these are Life, Liberty and the pursuit of Happiness. 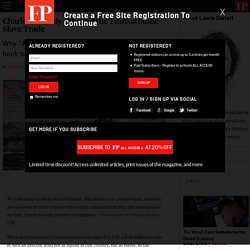 —Declaration of Independence, 1776 When the Declaration of Independence was signed in 1776, a half-million people of African descent lived not as equals in this country, but as slaves. In the Southern colonies, where slavery was an essential component of cotton and tobacco production, 40 percent of the population was owned by European-descendant masters. Lavish estate of Felix Dennis on sale for £10m. Controversial publisher Felix Dennis' estate in Dorsington, Warwickshire on the market for a staggering £9,470,000Provocateur created a host of English country homes which can be bought together or as one of 11 separate lotsInspired by Treasure Island, the barn disguises a pirate pool with palm trees, a crow's nest, a fish tank, and a boatThe south wing includes the kitchen and banqueting hall and an authentic Art Deco inspired cinema with a bar By Callum Paton For Mailonline Published: 11:59 GMT, 3 May 2015 | Updated: 16:51 GMT, 3 May 2015 The family of controversial publisher Felix Dennis have put his lavish £10million estate on the market , and it comes complete with it's own pirate-themed play barn. 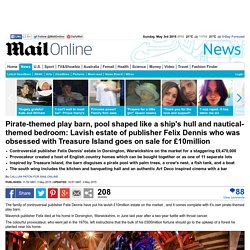 6 Google Flights Tricks That Are Better Than Any Travel Agent. Latitudestock - TTL via Getty Images Chances are you're familiar with Google Flights. 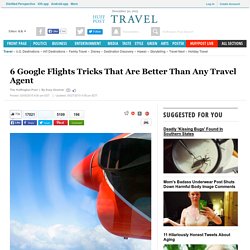 The flight search engine does everything you assume it would, like locate flights based on your ideal outbound time, inbound time and number of stops. After all, it's the same technology that powers both KAYAK and Orbitz. The site also includes a whole host of features that aren't so easy to imagine, probably because they're so unimaginably amazing. In some cases, this online tool can beat out any human travel agent. 1. Just Google "flights to Europe" and click the Flights tab below the search box. Uk.businessinsider. A new Google-powered website lets you compare every constitution in the world and write your own. In an ornate hall in the Philadelphia State House in 1787, a few dozen men drafted the US constitution. For four months, they debated and revised the document until they had something they could generally agree on.

We Meant Well: How I Helped Lose the Battle for the Hearts and Minds of the Iraqi People (American Empire Project): Peter Van Buren: 9780805096811: Amazon.com: Books. I Draw Maps.