6 Google Flights Tricks That Are Better Than Any Travel Agent 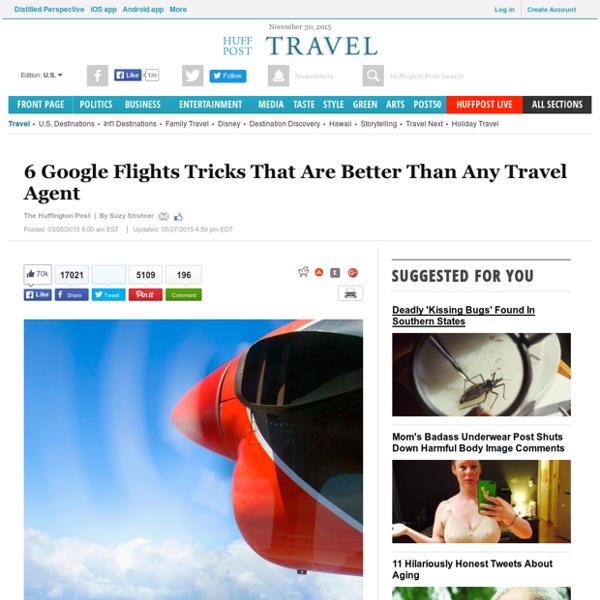 Latitudestock - TTL via Getty Images Chances are you're familiar with Google Flights. The flight search engine does everything you assume it would, like locate flights based on your ideal outbound time, inbound time and number of stops. After all, it's the same technology that powers both KAYAK and Orbitz. The site also includes a whole host of features that aren't so easy to imagine, probably because they're so unimaginably amazing. In some cases, this online tool can beat out any human travel agent. 1. Just Google "flights to Europe" and click the Flights tab below the search box. 2. What "I'm feeling lucky" does for search, it also does for flights. 3. The "Best flights" box tells you which flights are the best combinations of price and speed, so you won't have to decide whether a layover is a good idea or if a nonstop is worth the extra buck. 4. You can see prices for your trip on every day of the month, with the cheapest days highlighted in green. 5. 6.

7 U.S. National Parks You Didn't Know You Needed To See (Photo: Getty Images) You know Yellowstone and Yosemite... but how much do you know about the America's 56 other National Parks? These lesser-known National Parks are less popular than their famed counterparts, but they're just as beautiful. Whether you want to explore ocean, mountains, caverns or forest, these parks offer an adventure for everyone. Lake Clark National Park and Preserve, Alaska 8 Travel Apps That Work Better Than A Guidebook  Skip pricey bus or walking tours on your next trip and instead download these apps, which offer historical insight and cool bits of trivia about areas around the world. Bonus: you won't have to lug around a guidebook. Walking tours are a great way to learn about an area. Unfortunately, guided tours are often expensive and require that you stick with the group and your guide, with little to no time to do your own exploring. But some apps are looking to replace those guides, giving you the ability to take a tour at your own pace for just a few dollars. Here are eight worth checking out.

Center Parcs breaks and holidays in Europe Who are Center Parcs ? We are two separate companies sharing the same company name and logo. The UK villages are owned and operated by Center Parcs Limited registered in England. The European villages are owned and operated by Center Parcs Europe NV registered in The Netherlands. What does Center Parcs offer? What You Need To Know About Booking Your Flight  (Photo: Ticking Clock/Shutterstock) For at least two decades, industry experts have been speculating about basic timing factors in finding the lowest airfares. The big question: When is the best time to buy plane tickets?

Go Inside Son Doong, The World's Largest Cave. It's Magnificent. The Son Doong Cave in Vietnam is the biggest cave in the world. It's over 5.5 miles long, has a jungle and river, and could fit a 40-story skyscraper within its walls. But nobody knew any of that until about six years ago. The recently discovered cave has been touted as the largest in the world, although other caves vie for the title of longest (Mammoth Cave in Brownsville, Kentucky nabs that title with about 400 miles of passageways) and deepest (Krubera Cave in the nation of Georgia). A local man discovered the cave entrance in 1991, but British cavers were the first to explore it in 2009. Tour company Oxalis has been running trial tours of the cave since two summers ago.

10 Secrets The Airlines Don't Want You To Know  Once you’ve experienced a $200 price spike in the middle of your ticket search, your fourth 45-minute flight delay of the day, or your bag going MIA in Miami, you can’t help but think: what are these airlines hiding from me? It turns out, A LOT. Sure, some of it’s coincidence, and you get an $8 voucher for an airport breakfast. But that overpriced breakfast is not an adequate salve — and in fact, you’ve got a right to more than that. Here are 10 secrets airlines don’t want you to know. Credit: Flickr/401(K) 2012 10 Hilariously Bitchy TripAdvisor Reviews Eiffel Tower: “Piece of Rusted Iron” At least he gave it a 3-star review. At a play in Scotland: “The actors have a Scottish accent” (Source) Mona Lisa at the Louvre: “It was just a sea of raised arms and cameras”

How To Find The Best Flight To Get You Where You Want To Go Well, this has just taken the lead for best Internet invention of the day. Fivethirtyeight.com, the wonderous ESPN site from Nate Silver, launched an interactive tool on Wednesday aptly named Which Flight Will Get You There Fastest? It does exactly what you think it does. San Francisco (1955 Cinemascope film) : Tullio Pellegrini Cinemascope homage to the city of San Francisco made by amateur filmmaker and inventor Tullio Pellegrini. Run time 21 minutes 28 secondsProducer Tullio PellegriniAudio/Visual sound, color Reviewer:DonEagle - favoritefavoritefavoritefavoritefavorite - February 18, 2017 Subject: My Time in San Franisco Christmas Markets in Belgium and Europe Dates for 2017 The holidays are a magical time in Belgium and around Europe. Nothing is more festive than strolling through decorated chalets, brimming with gift ideas, with a hot cup of mulled wine in your hand. Of course, stopping along the way for tasty holiday food is a great part of the experience too. On this page, we’ve rounded up as many of the best Christmas Markets we can find, in Belgium and around Europe. We’ve included the massive month-long markets, as well as the smaller, local fairs that happen for only a day or two. We make every effort to keep this page updated with the latest information but please be sure to check the official websites before making your travel plans.

7 Secrets To Ultra-Cheap Europe Flights  As the euro falls against the dollar and the weather warms, now is the time to book a trip across the pond. But a favorable exchange rate won't help you get there for less. That's where we come in. Here are seven tried-and-true booking strategies for nabbing the absolute cheapest flight to Europe.