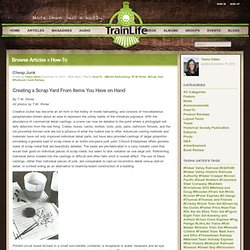 Rimer All photos by T.W. Rimer Creative clutter has become an art form in the hobby of model railroading, and consists of miscellaneous paraphernalia strewn about an area to represent the untidy habits of the miniature populace. With the abundance of commercial detail castings, a scene can now be detailed to the point where a photograph will defy detection from the real thing. Crates, boxes, sacks, bottles, tools, pots, pans, bathroom fixtures, and the old proverbial kitchen sink are but a pittance of what the market has to offer. 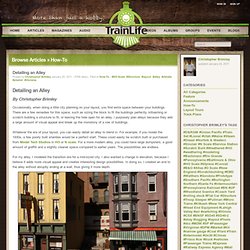 There are a few remedies for this space, such as sizing the block to fit the buildings perfectly, kitbashing or scratch building a structure to fit, or leaving the hole open for an alley. I purposely plan alleys because they add a large amount of visual appeal and break up the monotony of a row of buildings. Whatever the era of your layout, you can easily detail an alley to blend in.

For example, if you model the 1930s, a few poorly built shanties would be a perfect start. For my alley, I modeled the transition era for a mid-sized city. Building a Plate I decided to build my alley on a small diorama in HO scale. To begin, I built a mold from sheet and strip styrene. The height of my curb and the raised street is .100”. Railroad Model Craftsman - Extra Board. Scratch Build a Billboard Frame pt1 : N Scale Limited. Have you ever needed a frame to stick a billboard into? 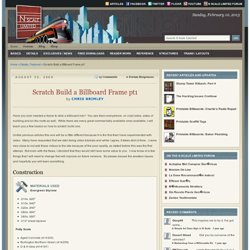 You see them everywhere, on road sides, sides of building and on the roofs as well. While there are many great commercially available ones available, I will teach you a few basics on how to scratch build one. Unlike previous articles this one will be a little different because it is the first that I have experimented with video. Many have requested that we start doing video tutorials and while I agree, it takes allot of time. I came very close to not add these videos to the site because of the poor quality, as stated before this was the first attempt. Construction Materials Used .010x .020″ .010x .040″ New Railway Modellers Forums - Model Railway Discussion Forum For Beginners.

Card Cards, Waybills, Train Orders, Timetables. Build Peek's Pike. Peek's Pike was designed to be fast and easy for a beginner to build, at moderate cost and using minimum space. 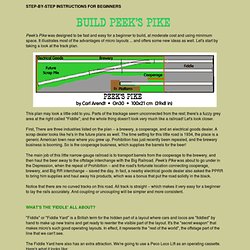 It illustrates most of the advantages of micro layouts ... and offers some new ideas as well. Let's start by taking a look at the track plan. This plan may look a little odd to you. Parts of the trackage seem unconnected from the rest; there's a fuzzy grey area at the right called "Fiddle"; and the whole thing doesn't look very much like a railroad! Prototype Yards: Adapting Prototype Operations to Model Railroading. Originally presented as a clinic at the 1998 NMRA National Convention Introduction This is an opportunity to look at my memory of how one particular prototype operated. 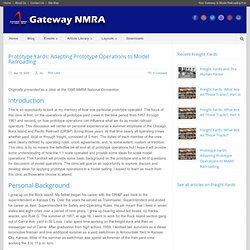 The focus of this clinic is first, on the operations of prototype yard crews in the time period from 1957 through 1961 and second, on how prototype operations can influence what we do as model railroad operators. This discussion will center on personal experience as a summer employee of the Chicago, Rock Island and Pacific Railroad (CRI&P) during those years. At that time nearly all operating crews whether yard, local or through freight, consisted of 5 men.

Personal Background I grew up on the Rock Island. Prototype Basics Crew Size – During my time as a railroader crews consisted of 5 men on nearly every job. Crew Duties – The engineer was the “driver.” Crew Assignment – Whether the yards was small, a la Carrie Ave., or huge, a la Armourdale, there were specific jobs assigned to specific crews. Model Operations Conclusion. Cheap Tricks - Low Cost Ways to Improve Your Model Railroading. Card Cards, Waybills, Train Orders, Timetables. The Northern Pacific N-Scale Railroad. Peter's Web Page - A 009 Scottish Narrow Gauge Model Railway. The White River and Northern Model Railroad: Clinic. Animation on the WR&N IV Rick Spano's influence on me was visible the strongest for the degree of animation featured on this layout. 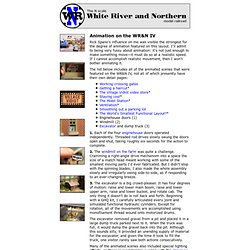 I'll admit to being very fussy about animation: it's not just enough to make something move—it must do so at a realistic speed. If I cannot accomplish realistic movement, then I won't bother animating it. The list below includes all of the animated scenes that were featured on the WR&N IV, not all of which presently have their own detail pages: 1. On30 Annual - Scratchbuild a Gallows Turntable. Model Railroad Craftsman Structure Kits and Masonry Castings - Fine Hydrocal Castings by C. C. Crow - On-Line How To Clinics -