Now drones are being used to expose bank details and passwords: Hackers manage to access 150 phones an hour through Wi-Fi. Experts in London have proved it's possible to use drones to steal dataThey modified an aircraft capable of tapping into a phone's Wi-Fi settings Once it had access, it was able to read and steal personal information Called Snoopy, the drone takes advantage of smartphones that actively search for networks From this it can also see networks those devices have accessed in the pastDuring tests, hackers exposed credit card information and passwords By Sarah Griffiths Published: 11:11 GMT, 21 March 2014 | Updated: 11:14 GMT, 21 March 2014 News that hovering drones can now steal passwords from unsuspecting phones will do little to ease fears that the widespread use of unmanned aircraft could infringe upon our privacy. 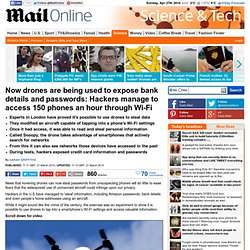 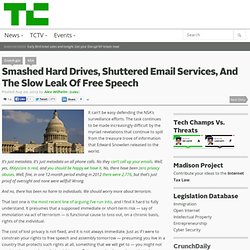 The task continues to be made increasingly difficult by the myriad revelations that continue to spill from the treasure trove of information that Edward Snowden released to the world. It’s just metadata. Drones And The Right To Privacy. Submitted by James E. 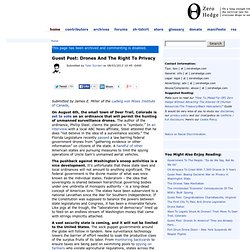 Miller of the Ludwig von Mises Institute of Canada, On August 6th, the small town of Deer Trail, Colorado is set to vote on an ordinance that will permit the hunting of unmanned surveillance drones. The author of the ordinance, Phillip Steel, claims the gesture is “symbolic.” In an interview with a local ABC News affiliate, Steel attested that he does “not believe in the idea of a surveillance society.” Is Seattle Being Buzzed By Drone-Equipped Peeping Toms?

Drones: When the Future Sneaks Up on You. EPIC domestic drones petition. FBI Investigating Unidentified Drone Spotted Near JFK Airport. A drone, similar in description to this Aeryon Labs “Scout” model, came within 200 feet of a passenger plane at John F. 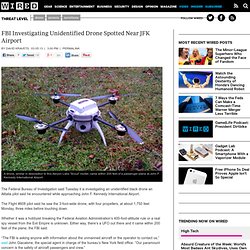 Kennedy International Airport. The Federal Bureau of Investigation said Tuesday it is investigating an unidentified black drone an Alitalia pilot said he encountered while approaching John F. Kennedy International Airport. The Flight #608 pilot said he saw the 3-foot-wide drone, with four propellers, at about 1,750 feet Monday, three miles before touching down. 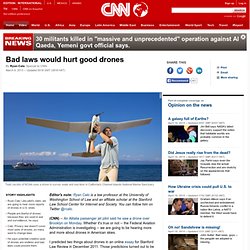 Ryan Calo: Like pilot's claim, we are going to hear more reports of drones in U.S. skies People are fearful of drones because they are used in war and surveillance, he saysCalo: Privacy law doesn't cover most uses of drones, so many want to change lawsHe says potential creative uses of drones are endless and bad laws could prevent them Editor's note: Ryan Calo is a law professor at the University of Washington School of Law and an affiliate scholar at the Stanford Law School Center for Internet and Society. You can follow him on Twitter @rcalo. (CNN) -- An Alitalia passenger jet pilot said he saw a drone over Brooklyn on Monday. 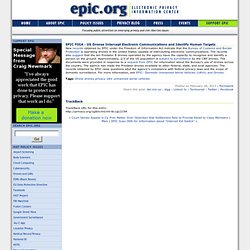 The records also suggest that the ten Predator B drones operated by the agency have the capacity to recognize and identify a person on the ground.

Journalism Students Are Learning To Operate Drones For...Journalism? Drones. City in Virginia Becomes First to Pass Anti-Drone Legislation - US News & World Report. Seattle grounds police drone program. Originally published February 7, 2013 at 9:34 PM | Page modified February 8, 2013 at 8:52 AM Saying police need to stay focused on “community building,” Mayor Mike McGinn has pulled the plug on the department’s controversial drone program even before it got off the ground. 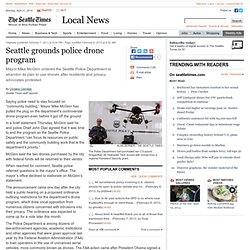 In a brief statement Thursday, McGinn said he and police Chief John Diaz agreed that it was time to end the program so the Seattle Police Department “can focus its resources on public safety and the community building work that is the department’s priority.” McGinn said the two drones purchased by the city with federal funds will be returned to their vendor. When reached for comment, Seattle police referred questions to the mayor’s office. Domestic surveillance drone bans are sweeping the nation.

Courtesy of Draganfly Innovations Inc In the past year, the American public has begun to pay more and more attention to the issue of domestic surveillance drones. 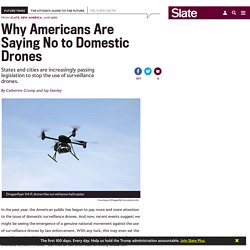 And now, recent events suggest we might be seeing the emergence of a genuine national movement against the use of surveillance drones by law enforcement. With any luck, this may even set the stage for a wider dialogue about the increasingly intrusive technologies that are intended to catch crooks—but that all too often cast an overly broad net. Last week, after an especially raucous city council hearing, the Seattle police department terminated its drones program and agreed to return the purchased equipment to the manufacturer. DHS Working Group to Consider Privacy Impact of Drones. DHS Working Group to Consider Privacy Impact of Drones The Department of Homeland Security has released a previously internal memo regarding the establishment of a working group to "Safeguard Privacy, Civil Rights, and Civil Liberties in the Department's Use and Support of Unmanned Aerial Systems" (drones). 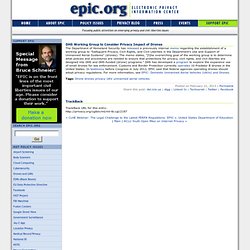 The memo states, "[t]he overarching goal of the working group is to determine what policies and procedures are needed to ensure that protections for privacy, civil rights, and civil liberties are designed into DHS and DHS-funded [drone] programs. " DHS has developed a program to explore the expansive use of small drones for law enforcement. Customs and Border Protection currently operates 10 Predator B drones in the United States.

In testimony before Congress in July 2012, EPIC said that federal agencies operating drones should adopt privacy regulations. Just How Many Drone Licenses Has the FAA Really Issued? The Los Angeles Times reported last week that the FAA has issued 1,428 permits to domestic drone operators since 2007 and noted this was “far more than were previously known.” 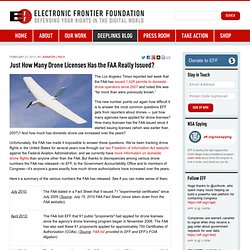 This new number points out again how difficult it is to answer the most common questions EFF gets from reporters about drones — just how many agencies have applied for drone licenses? How many licenses has the FAA issued since it started issuing licenses (which was earlier than 2007)? And how much has domestic drone use increased over the years? Unfortunately, the FAA has made it impossible to answer these questions. February 27 House Judiciary Hearing on “Drones and the War on Terror” Like a Swarm of Lethal Bugs: The Most Terrifying Drone Video Yet - Conor Friedersdorf. An Air Force simulation says researchers are at work on killer robots so tiny that a group of them could blend into a cityscape. Science writer John Horgan's feature on the many ways drones will be used in coming years is interesting throughout, and terrifying in the passage where he describes an effort to build micro-drones that are, as the U.S.

Air Force describes them, "Unobtrusive, pervasive, and lethal. " Air Force officials declined a request to observe flight tests at a "micro-aviary" they've built, he reported, but they did let him see a video dramatization "starring micro-UAVs that resemble winged, multi-legged bugs. The drones swarm through alleys, crawl across windowsills, and perch on power lines. One of them sneaks up on a scowling man holding a gun and shoots him in the head. " Here's that video (click "hide ad" to play): When I watch that simulation I am horrified.

How far ahead is President Obama thinking? Is That Legal? — Privacy Law Today - What’s at Stake? Part One: Digital Communications and Technology. “Here’s a thought that might make even the most conscientious e-mail user nervous: ‘When the CIA director cannot hide his activities online, what hope is there for the rest of us?’ …[David Petraeus’] story has gotten lots of media attention, in part for its soap-operatic qualities. Less discussed, however, at least outside the technology press, is what this e-mail-based investigation says about privacy and surveillance in the digital age.”

(John Sutter, What the Petraeus scandal says about digital spying and your e-mail, CNN) As we follow the very public downfall of four-star general and former CIA head David Petraeus, it’s easy to wonder just how far the notion of “privacy” has evolved – and will evolve, in the face of ever-changing technology. Drones. Iran's Photoshop FAIL: 'New drone' actually Japanese university bird. High performance access to file storage Earlier this month Iran showed off its latest drone design, but on examination the photographs bear a striking similarity to those coming out of Japan's Chiba University.

The connection was spotted by pilot, and blogger, Gary Mortimer, who felt the design of the KOKER-1 looked familiar but had to spend a few weeks remembering exactly where he'd seen it before before he remembered the Japanese researchers. He charitably suggests the Iranians might have bought a Quad Tilt Wing (QTW) unmanned aerial vehicle (UAV) for testing, but admits they found a remarkably similar building over which to test it: UK and France to sign drone deal. Drones increasingly used for surveillance in U.S. Drones are not just for spying and targeted assassinations in Iraq, Afghanistan and other war zones. Cameras on drone aircraft trigger calls for legislation.

Man arms DIY drone with paintball handgun and shoots human cardboard cutouts. Student Tweets Entire History of US Drone Strikes. How long would it take to tweet the entire history of US drone strikes one by one? Josh Begley, a graduate student at New York University, thought he would only need 10 minutes.

Josh Begley Tweets Entire History of U.S. Drone Attacks. It’s a decade-long story that Josh Begley believes too few Americans know about. A story, he says, “that fundamentally shifts how we understand what war is.”