What If Consciousness Comes First? Source: ColiN00B/Pixabay Despite the success of neuroscience in establishing a wide range of correlations between brain processes and conscious experience, there is at least one question about the relationship between the brain and consciousness that continues to appear unanswerable, even in principle. 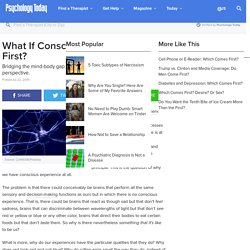 Octopus And Squid Evolution Is Officially Weirder Than We Could Have Ever Imagined. How an outsider bucked prevailing Alzheimer's theory, clawed for validation. Robert Moir was damned if he did and damned if he didn’t. 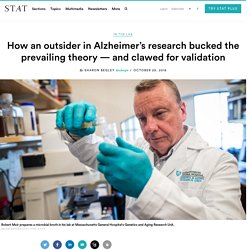 The Massachusetts General Hospital neurobiologist had applied for government funding for his Alzheimer’s disease research and received wildly disparate comments from the scientists tapped to assess his proposal’s merits. It was an “unorthodox hypothesis” that might “fill flagrant knowledge gaps,” wrote one reviewer, but another said the planned work might add little “to what is currently known.”

A third complained that although Moir wanted to study whether microbes might be involved in causing Alzheimer’s, no one had proved that was the case. As if scientists are supposed to study only what’s already known, an exasperated Moir thought when he read the reviews two years ago. He’d just had a paper published in a leading journal, providing strong data for his idea that beta-amyloid, a hallmark of Alzheimer’s disease, might be a response to microbes in the brain. 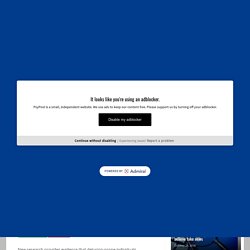 The study, which appears in the Journal of Applied Research in Memory and Cognition, suggests that the inability to detect false information is related to a failure to be actively open-minded. The rise of online social media has led to growing concerns about the spread of unsubstantiated rumors, misleading political propaganda, and blatantly false articles designed to create viral web traffic. Even the U.S. Army has become involved in efforts to understand and combat disinformation in cyberspace. “Our interest in fake news is grounded in a general interest in understanding the common experience of believing things that are not true,” explained study author Michael V. The Trick To Thinking Clearer and Better – Personal Growth. The late historians Will and Ariel Durant spent four decades of their life studying, compiling, and writing the history of Western civilization. 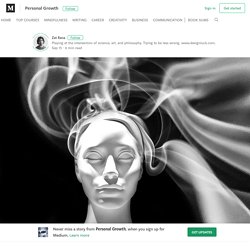 The product of their efforts, The Story of Civilization, went on to fill four million words, across 10,000 pages, divided into 11 separate books. Brain-on-a-chip model may lead to new treatments for traumatic brain injury. NSF-funded researchers have produced a working traumatic brain injury model on a chip the size of a microscope slide. 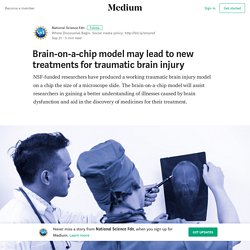 The brain-on-a-chip model will assist researchers in gaining a better understanding of illnesses caused by brain dysfunction and aid in the discovery of medicines for their treatment. Millions affected Over 5 million people in the United States suffer from traumatic brain injury (TBI), and 1.7 million new cases are reported every year.

TBI is caused by sudden trauma to the head powerful enough to cause the brain to move inside the cranium. Mild TBI is often referred to as a concussion and is characterized by a temporary loss of consciousness, concentration or memory. Military and athletes TBI is a major health concern to the U.S. military. Severe trauma impairs brain cell function While researchers have gained much knowledge from animal studies, they need test-tube-like models that mimic DAI to understand the mechanisms involved at the molecular level. Mimicking the brain. Psychological link between conspiracy theories and creationism click 2x. Ask a three-year-old why they think it’s raining, and she may say “because the flowers are thirsty”. 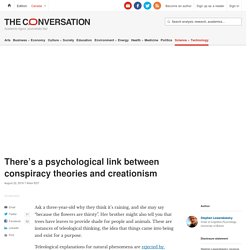 Her brother might also tell you that trees have leaves to provide shade for people and animals. These are instances of teleological thinking, the idea that things came into being and exist for a purpose. Teleological explanations for natural phenomena are rejected by scientists because these explanations appeal to intentions. Is talking to yourself a sign of mental illness? An expert delivers her verdict. Being caught talking to yourself, especially if using your own name in the conversation, is beyond embarrassing. 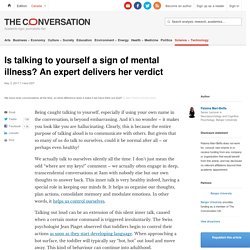 And it’s no wonder – it makes you look like you are hallucinating. Clearly, this is because the entire purpose of talking aloud is to communicate with others. But given that so many of us do talk to ourselves, could it be normal after all – or perhaps even healthy? We actually talk to ourselves silently all the time. People who think their opinions are superior to others are most prone to overestimating their relevant knowledge and ignoring chances to learn more. DIY Neuroscience. The Origin of Intelligence click 2x. Michio Kaku: In the entire universe the two greatest scientific mysteries are first of all the origin of the universe itself. 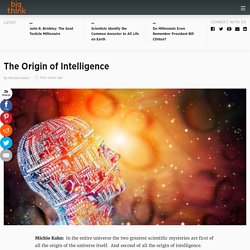 And second of all the origin of intelligence. Believe it or not, sitting on our shoulders is the most complex object that Mother Nature has created in the known universe. Rhetological Fallacies — Information is Beautiful. To think critically, you have to be both analytical and motivated. Your Brain Hallucinates Your Conscious Reality. Black and White thinking. Currently, there are three important issues on which there is scientific consensus but controversy among laypeople: climate change, biological evolution and childhood vaccination. 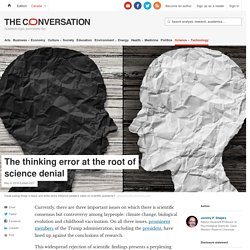 On all three issues, prominent members of the Trump administration, including the president, have lined up against the conclusions of research. This widespread rejection of scientific findings presents a perplexing puzzle to those of us who value an evidence-based approach to knowledge and policy. Yet many science deniers do cite empirical evidence. Facts Don't Win Fights: Here’s How to Cut Through Confirmation Bias.