How an outsider bucked prevailing Alzheimer's theory, clawed for validation 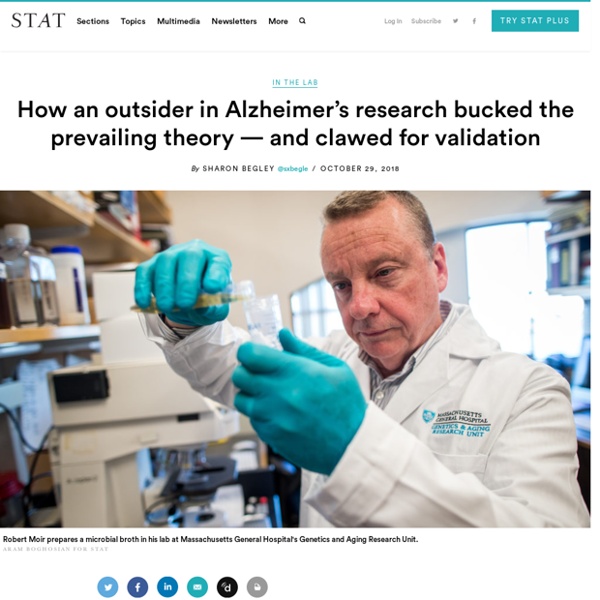 Robert Moir was damned if he did and damned if he didn’t. The Massachusetts General Hospital neurobiologist had applied for government funding for his Alzheimer’s disease research and received wildly disparate comments from the scientists tapped to assess his proposal’s merits. It was an “unorthodox hypothesis” that might “fill flagrant knowledge gaps,” wrote one reviewer, but another said the planned work might add little “to what is currently known.” A third complained that although Moir wanted to study whether microbes might be involved in causing Alzheimer’s, no one had proved that was the case. As if scientists are supposed to study only what’s already known, an exasperated Moir thought when he read the reviews two years ago. He’d just had a paper published in a leading journal, providing strong data for his idea that beta-amyloid, a hallmark of Alzheimer’s disease, might be a response to microbes in the brain. But something had long bothered him about the “evil amyloid” dogma. Dr.

Reclaiming lost calories: Tweaking photosynthesis boosts crop yields What if your ability to feed yourself was dependent on a process that made a mistake 20 percent of the time? We face this situation every day. That’s because the plants that produce the food we eat evolved to solve a chemistry problem that arose billions of years ago. Plants evolved to use carbon dioxide to make our food and the oxygen we breathe – a process called photosynthesis. But they grew so well and produced so much oxygen that this gas began to dominate the atmosphere. To plants, carbon dioxide and oxygen look very similar, and sometimes, plants use an oxygen instead of carbon dioxide.

About Clinician Reviews Clinician Reviews is written for NPs and PAs, by PAs and NPs, covering topics of vital interest to health care practitioners. Clinician Reviews reaches more than 125,000 PAs and NPs online and in print and has been serving our audience for more than 25 years. In 2019, Clinician Reviews won a silver award in the Best Use of Infographics category for our Third Annual Job Satisfaction Survey. This highly regarded honor from the American Society of Healthcare Publication Editors signals excellence in competition with the very best that the health care sector offers. Circumcision: Social, Sexual, Psychological Realities We continue examining myths about circumcision, including traditions, social and sexual relations. NOTE: Primary author is Lillian Dell'Aquila Cannon (see her blog), with assistance from Dan Bollinger Part 3 article continues after advertisement Myth: You have to circumcise the baby so that he will match his dad.

Electronic Nose Analyses Breath to Diagnose Disease In Brief Researchers are building an electronic nose that can accurately detect and distinguish chemicals in your breath, which could lead to earlier diagnosis of diseases and eventually replace blood tests. Beta testing is targeted early in 2018. A Breath Test In Place of Blood Test Plastic leachates impair growth and oxygen production in Prochlorococcus , the ocean’s most abundant photosynthetic bacteria Plastic leachates negatively affect Prochlorococcus growth Leachates of common plastic items (HDPE shopping bags and PVC matting) were made using a base of sterile artificial seawater. Exponential phase cultures of Prochlorococcus were inoculated into media containing a range of leachate dilutions (generated by volume/volume dilutions in AMP1 media of 50, 25, 12.5, 6.25 and 3.125% for HDPE; 10, 2, 1, 0.5 and 0.25% for PVC) alongside equivalent controls (AMP1 media with no leachate addition).

Watch a single cell become a complete organism in six pulsing minutes of timelapse Aeon email newsletters are issued by the not-for-profit, registered charity Aeon Media Group Ltd (Australian Business Number 80 612 076 614). This Email Newsletter Privacy Statement pertains to the personally identifying information you voluntarily submit in the form of your email address to receive our email newsletters More generally, when visiting the Aeon site you should refer to our site Privacy Policy here. Enhancing implementation science by applying best principles of systems science This review is grounded in the ongoing experiences of the authors to devise and implement interventions to promote health equity, including for older adults. Because the aforementioned interventions are both multilevel and dynamic, the scientific approaches employed evolved from utilising ecological models for thinking through pathways whereby determinants at the societal, community and interpersonal levels affect population and individual health and well-being [1–4], to embracing a portfolio of systems science models that usefully inform related research, practice, policy and education initiatives [5–7]. Forrester, the founder of system dynamics, famously explained that a manager’s verbal description of a corporate organisation constitutes a model [8].

Octopuses May Go Blind As Climate Change Sucks Oxygen Out of the Ocean Editor's Note: This story was updated at 11:20 a.m. E.D.T. on Friday, May 17 Turning light particles into visual information is hard work, and your body relies on oxygen to get the job done. This is true whether you walk the land on two limbs or swim through the sea with eight. In fact, according to a recent study in the Journal of Experimental Biology, the amount of oxygen available to marine invertebrates like squids, crabs and octopuses may be far more important to their vision than previously thought. In the study, published online April 24, researchers saw a significant drop in retinal activity in four species of marine larvae (two crabs, an octopus and a squid) when the animals were exposed to reduced-oxygen environments for as little as 30 minutes. [8 Crazy Facts About Octopuses]

One of the most wondrous markers of the end of the day is a murmuration of starlings Aeon email newsletters are issued by the not-for-profit, registered charity Aeon Media Group Ltd (Australian Business Number 80 612 076 614). This Email Newsletter Privacy Statement pertains to the personally identifying information you voluntarily submit in the form of your email address to receive our email newsletters More generally, when visiting the Aeon site you should refer to our site Privacy Policy here. This Email Newsletter Privacy Statement may change from time to time and was last revised 5 June, 2018. By clicking ‘Subscribe’ you agree to the following: We will use the email address you provide to send you daily and/or weekly email (depending on your selection).

Scientists Successfully Turn Breast Cancer Cells Into Fat to Stop Them From Spreading Researchers have been able to coax human breast cancer cells to turn into fat cells in a new proof-of-concept study in mice. To achieve this feat, the team exploited a weird pathway that metastasising cancer cells have; their results are just a first step, but it's a truly promising approach. When you cut your finger, or when a foetus grows organs, the epithelium cells begin to look less like themselves, and more 'fluid' – changing into a type of stem cell called a mesenchyme and then reforming into whatever cells the body needs. This process is called epithelial-mesenchymal transition (EMT) and it's been known for a while that cancer can use both this one and the opposite pathway called MET (mesenchymal‐to‐epithelial transition), to spread throughout the body and metastasise.