Debate. I enjoy a good conspiracy theory as much as the next peddler of anti-establishment vitriol. 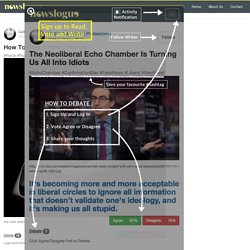 If you can hold them loosely, conspiracy theories can keep you conceptually and ideologically fluid so you don’t settle into any single set of perceptual or cognitive habits with this political stuff, and as an added bonus they tend to consistently infuriate all the worst kinds of people at all the right times. But this article is not about conspiracy theory. What I’ll be sharing with you here are verifiable matters of public record which I encourage you to independently investigate if anything you read here is new to you. 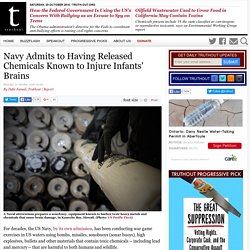 (Photo: US Pacific Fleet) For decades, the US Navy, by its own admission, has been conducting war game exercises in US waters using bombs, missiles, sonobuoys (sonar buoys), high explosives, bullets and other materials that contain toxic chemicals -- including lead and mercury -- that are harmful to both humans and wildlife. WikiLeaks Show Rothschilds Grooming Clinton for Presidency. Months before Hillary Clinton officially announced her bid for the presidency, the Rothschild family was hard at work helping craft her future economic policy. 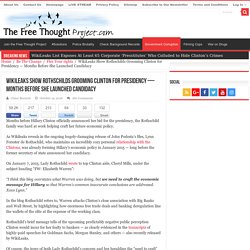 As Wikileaks reveals in the ongoing hugely-damaging release of John Podesta’s files, Lynn Forester de Rothschild, who maintains an incredibly cozy personal relationship with the Clintons, was already forming Hillary’s economic policy in January 2015 — long before the former secretary of state announced her candidacy. On January 7, 2015, Lady Rothschild wrote to top Clinton aide, Cheryl Mills, under the subject heading “FW: Elizabeth Warren”: “I think this blog overstates what Warren was doing, but we need to craft the economic message for Hillary so that Warren’s common inaccurate conclusions are addressed. "The Most Important WikiLeak" - How Wall Street Built The Obama Cabinet. Perhaps the most startling discovery of the WikiLeaks dumps so far didn't come from the most recent emails surrounding the various Hillary scandals, though there are many great ones, but from 2008 when John Podesta served as co-chair of President-elect Barack Obama’s transition team. 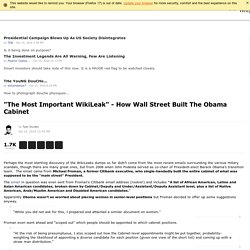 The email came from Michael Froman, a former Citibank executive, who single-handedly built the entire cabinet of what was supposed to be the "main street" President. The email in question was even sent from Froman's Citibank email address (rookie!) And includes "A list of African American, Latino and Asian American candidates, broken down by Cabinet/Deputy and Under/Assistant/Deputy Assistant level, plus a list of Native American, Arab/Muslim American and Disabled American candidates. " Apparently Obama wasn't as worried about placing women in senior-level positions but Froman decided to offer up some suggestions anyway. Security Assistance Monitor. Wasteful Spending Weapons Systems. Pentagon Waste Fraud and Abuse.

US military spending is this enough or do we need to spend more to be safe. Reports. Special Report 5: Sustainability: hidden costs risk new waste issued June 3, 2011 Special Report 4: Iraq — a forgotten mission? 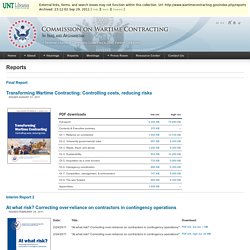 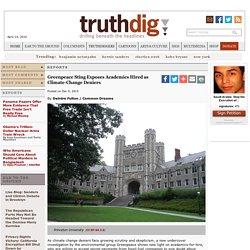 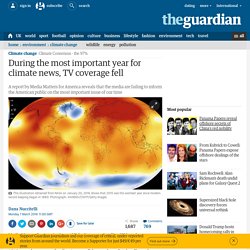 February, June, October, November, and December were each their respective hottest months on record, and 2015 shattered the record for hottest year. Your Real Government. When dark deeds unfold, point the finger in this direction. by Tony Cartalucci This is your real government; they transcend elected administrations, they permeate every political party, and they are responsible for nearly every aspect of the average American and European's way of life. 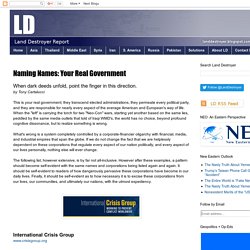 When the "left" is carrying the torch for two "Neo-Con" wars, starting yet another based on the same lies, peddled by the same media outlets that told of Iraqi WMD's, the world has no choice, beyond profound cognitive dissonance, but to realize something is wrong. There and Back Again - Your Trip Through the American Empire.

October 10, 2015 (Tony Cartalucci - LD) The October 8, 2015 US Senate Committee on Armed Services hearing titled, "Russian Strategy and Military Operations," gave viewers an instructive snapshot at the current state of America's dwindling power.Enter the American Empire The hearing is one of many interfaces between corporate-financier funded policy think tanks and the politicians who will ultimately rubber stamp their schemes and designs into law. 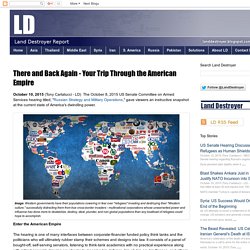 It consists of a panel of bought-off, self-serving senators, listening to think-tank academics with no practical experience along with retired generals drawing paychecks by keeping big-defense, big-oil, big-ag, big-finance, and others well fed. Each witness providing testimony is a member of a corporate-financier funded and directed policy think tank. Blackwater’s Founder Is Under Investigation for Money Laundering, Ties to Chinese Intel, and Brokering Mercenary Services. ERIK PRINCE, founder of the now-defunct mercenary firm Blackwater and current chairman of Frontier Services Group, is under investigation by the U.S. 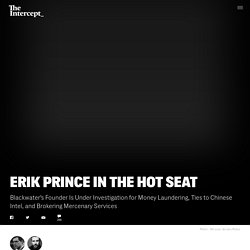 Department of Justice and other federal agencies for attempting to broker military services to foreign governments and possible money laundering, according to multiple sources with knowledge of the case. What began as an investigation into Prince’s attempts to sell defense services in Libya and other countries in Africa has widened to a probe of allegations that Prince received assistance from Chinese intelligence to set up an account for his Libya operations through the Bank of China. The REID 9 STEPS OF INTERROGATION, IN BRIEF. Most police detectives and interrogators in are trained in the following method of interrogation.

Key points to look at here, the suspect really not allowed to talk much until step 8. Another key point with this technique is that it is not concerned with voluntariness of the statement until the police are recording the statement at the end of Step 9. The REID 9 STEPS OF INTERROGATION, IN BRIEF Step One: Direct Positive Confrontation A. Outsourcing Report Oct 2014. Someone finally polled the 1% — And it's not pretty. On May 22, The Campaign for America's Future gave a conference on The New Populist Majority. The keynote speaker was Elizabeth Warren. The conference confronted the meme that the US is a "center-right" country. Most interesting to me was the fact that they obtained poll results from "the 1%. " Typically, "upper income" in polling is considered "over $250K/yr" or even "over $150K/yr. " Such people are rich compared to most, but they do not have enough money to buy elections with their spare change.

With Liberty to Monitor All. For much of its history, the United States has held itself out as a model of freedom, democracy, and open, accountable government. Freedoms of expression and association, as well as rights to a fair trial, are protected by the Constitution, and US officials speak with pride of the freedom of the media to report on matters of public concern and hold government to account for its actions. Yet, as this report documents, today those freedoms are very much under threat due to the government’s own policies concerning secrecy, leak prevention, and officials’ contact with the media, combined with large-scale surveillance programs. Chemical Lobby Spends Equivalent of $121,000 Per Congress Member. Overall spending on lobbying may have fallen again in the first quarter of 2014, but not everyone decided to pull back.

In fact, some companies and industries pumped up their lobbying in the quarter, with the chemical and pharmaceutical industries leading the pack. Dow Chemical was the company with the biggest jump from the fourth quarter of 2013 to the first quarter of 2014. The chemical giant spent more than $5.15 million, tripling what it paid out in the three months prior. That $5.15 million is far and away the most the company has spent in a quarter over the past five years. America Has a Hidden Climate Denial Network and New Research Maps It Out.

Bush administration Environmental Protection Agency Administrator Michael Leavitt addresses members of the American Legislative Exchange Council in Seattle. Behind Leavitt is a sign for the morning’s sponsor, ExxonMobil. July 2004. Lack of Accountability/Cops Protecting Eachother. Foundation for Defense of Democracies. Daveed Gartenstein-Ross is a senior fellow at the Foundation for Defense of Democracies, an adjunct assistant professor in Georgetown University’s security studies program, and a lecturer at the Catholic University of America. He is also the chief executive officer of Valens Global, a consulting firm focusing on the challenges posed by violent non-state actors. The Koch Brothers' political Network. SOA Watch: Close the School of the Americas. Morning Reads: New Details: $ in Politics/ via Clarelucy.

Center for Cognitive Liberty & Ethics (CCLE) The Marketing Of Neo-Liberal Economics through the Ages: The 'Nobel Prize' in Economics [Archive] - iTulip.com. This article was first published on AlterNet ( It’s Nobel Prize season again. News about defense programs, business, and technology. The Rand Corporation: The Think Tank That Controls America. By Alex Abella If you think the Internet came out of Silicon Valley, that NASA planned the first satellite to orbit Earth, or that IBM created the modern computer—think again. Pentagon remains stubbornly unable to account for its billions. National Security Network. The National Security Archive. Global Research - Centre for Research on Globalization. Notre site en Français : mondialisation.ca Global Research.

Five Big Banks Plead Guilty to Rigging Currency Markets and No One Goes to Jail. David Graeber on Bureaucracy. Governing by Debt. The Making of the Indebted Man. Warren Neidich » Neuropower. Social media monopolies & noopower. The promise of noopolitik. The Emergence of Noopolitik: Toward An American Information Strategy. Empire - The Rise of the Oligarchs.