Could a Root Canal Be the Cause of Your Chronic Health Problem? Root canal treated teeth may harbor harmful microbes, the toxic metabolic waste products of which can have systemic health impacts and contribute to a variety of chronic diseases. 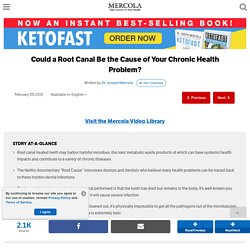 The Netflix documentary “Root Cause” investigates these issues, interviewing doctors and dentists around the world, including yours truly (although briefly), who believe many health problems can be traced back to these infected teeth. Interviewed medical professionals include: The film details the personal experiences of film director Frazer Bailey (played by actor Ben Purser), who spent a decade trying to track down the root cause of his chronic anxiety, fatigue, nausea, dizziness and insomnia.

A trailer is included above. The full film is available on Netflix. Root Canals Are a Source of Chronic Infection As explained in the film, the key problem with a root canal is that the tooth has died but remains in the body. There’s really no reason to imagine a dead tooth wouldn’t cause the same kind of problem. Minamata Convention on Mercury: Banning of Amalgam in Dentistry. By Dr. 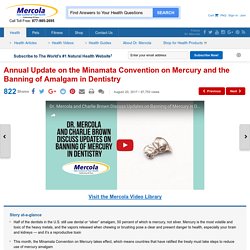 Mercola Mercury is a pernicious poison that should never be placed in your mouth. Yet half of the dentists in the U.S. still use dental or “silver” amalgam, 50 percent of which is mercury, not silver. Mercury is the most volatile and toxic of the heavy metals, and the vapors released when chewing or brushing pose a clear and present danger to health — especially your brain and kidneys, as mercury is a neuro- and nephrotoxin. It’s also toxic to your reproductive system. As such, it’s really shocking that mercury amalgam is still being allowed to be placed mere inches from a child’s developing brain. He’s spent the last two decades tirelessly advocating for the complete elimination of mercury from dentistry across the world. Caring for Your Oral Microbiome. By Dr. 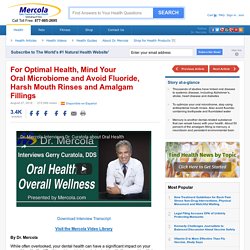 Mercola While often overlooked, your dental health can have a significant impact on your overall health. It's difficult to achieve high-level physical health if your oral health is ignored. Dr.Gerry Curatola, founder of Rejuvenation Dentistry, has over 30 years' experience in biological dentistry. As Curatola notes, your mouth is your "gateway to total body wellness. " Inflammation is known to be a disease-causing force leading to most chronic illness, and gum disease and other oral diseases produce chronic low-grade inflammation that can have a deleterious effect on every major organ system in your body. Oral disease can therefore contribute to diseases such as diabetes, heart disease and Alzheimer's, just to name a few. Heal Cavities, Gum Disease, Naturally with Organic Oral Care – Toothpaste Recipes Included. 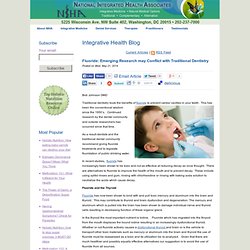 This has been the conventional wisdom since the 1950’s. Continued research by the dental community and outside researchers has occurred since that time. As a result dentists and the traditional dental community recommend giving fluoride treatments and to legislate fluoridation of public drinking water. In recent studies, fluoride has increasingly been shown to be toxic and not as effective at reducing decay as once thought. Fluoride - What's the Big Deal? Fluoride - What's the Big Deal? 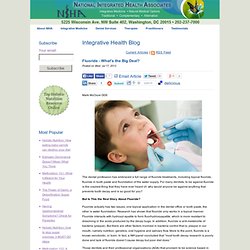 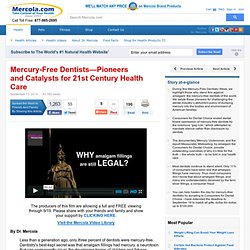 Mercola Less than a generation ago, only three percent of dentists were mercury-free. Dentistry's best-kept secret was that amalgam fillings had mercury, a neurotoxin that can permanently injure the developing brains of children and fetuses. The secret was enforced by tyrannical dental boards, which threatened to pull the license (the right to practice) of dentists who spoke out -- and who did in fact pull mercury-free dentists' licenses in California, Colorado, Florida, Iowa, Minnesota, and New York. Other mercury-free dentists faced unrelenting pressure from their peers to conform. Yet half of America's dentists have still not changed. Why I'm In Love With Oil Pulling (And Why You Should Be Too) Homemade Remineralizing Toothpaste Recipe for Oral Health.

Avoiding your dentist can save your life. (NaturalNews) The standard practice of dentistry is dangerous to American health. 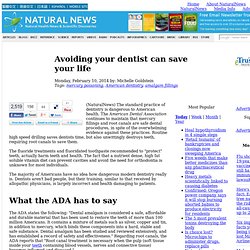 The American Dental Association continues to maintain that mercury fillings and root canals are safe dental procedures, in spite of the overwhelming evidence against these practices. Routine high speed drilling saves dentists time, but also unwittingly destroys teeth, requiring root canals to save them. The fluoride treatments and fluoridated toothpaste recommended to "protect" teeth, actually harm teeth and health. The fact that a nutrient dense, high fat soluble vitamin diet can prevent cavities and avoid the need for orthodontia is unknown for most individuals. The majority of Americans have no idea how dangerous modern dentistry really is. The ADA states the following: "Dental amalgam is considered a safe, affordable and durable material that has been used to restore the teeth of more than 100 million Americans.