Species Care Sheet. These care sheets are based on my personal experiences with that particular species. 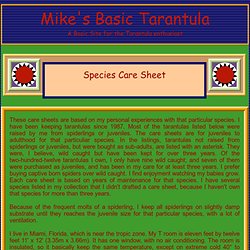 I have been keeping tarantulas since 1987. Most of the tarantulas listed below were raised by me from spiderlings or juveniles. The care sheets are for juveniles to adulthood for that particuliar species. Psa-irminias-care-sheet. Mexican Red-Rump Tarantula (Brachypelma vagans) Care Sheet. Brachypelma vagans (Mexican Red-Rump Tarantula) This spider was first described by Ausserer in 1875 and is a native of Mexico, and is frequently found in Belize, El Salvador and Guatemala, where is can be found in deep burrows. 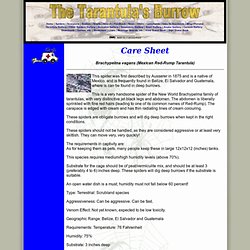 This is a very handsome spider of the New World Brachypelma family of tarantulas, with very distinctive jet black legs and abdomen. The abdomen is liberally sprinkled with fine red hairs (leading to one of its common names of Red-Rump). The carapace is edged with cream and has thin radiating lines of cream colouring. These spiders are obligate burrows and will dig deep burrows when kept in the right conditions. These spiders should not be handled, as they are considered aggressive or at least very skittish. The requirements in captivity are: As for keeping them as pets, many people keep these in large 12x12x12 (inches) tanks. This species requires medium/high humidity levels (above 70%). An open water dish is a must; humidity must not fall below 60 percent! Honduras Curly Hair Tarantula (Brachypelma albopilosa)Care Sheet. Honduras Curly Hair Tarantula (Brachypelma albopilosa) This species was first described by Valerio in 1980. 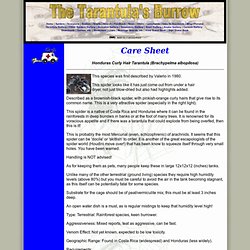 This spider looks like it has just come out from under a hair dryer, not just blow-dried but also had highlights added. Described as a brownish-black spider, with pinkish-orange curly hairs that give rise to its common name. This is a very attractive spider (especially in the right light). This spider is a native of Costa Rica and Honduras where it can be found in the rainforests in deep burrows in banks or at the foot of many trees. This is probably the most Mercurial (even, schizophrenic) of arachnids. Handling is NOT advised! As for keeping them as pets, many people keep these in large 12x12x12 (inches) tanks. Unlike many of the other terrestrial (ground living) species they require high humidity levels (above 80%) but you must be careful to avoid the air in the tank becoming stagnant, as this itself can be potentially fatal for some species. Usambara Orange Baboon Tarantula. Usambara Orange Baboon TarantulaPterinochilus murinus (Araneae: Theraphosidae) Photo courtesy of Nix Usambara Orange Baboon Tarantulas are one of several species of Pterinochilus (the common name doesn't mean anything, but I've included it here since many people who view my site are not keen on proper Latin names). 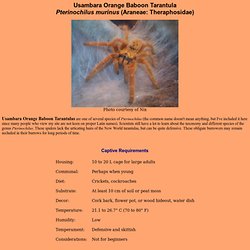 Scientists still have a lot to learn about the taxonomy and different species of the genus Pterinochilus. These spiders lack the urticating hairs of the New World tarantulas, but can be quite defensive. These obligate burrowers may remain secluded in their burrows for long periods of time. Captive Requirements. Top 10 beginner's Tarantulas. Updated: 05 April 2009 If you are new to the hobby and wonder what specie you should get, you are in the right place. 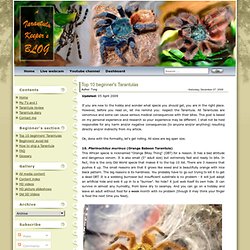 However, before you read on, let me remind you: respect the Tarantula. All Tarantulas are venomous and some can cause serious medical consequences with their bites. This post is based on my personal experience and research so your experience may be different. I shall not be held responsible for any harm and/or negative consequences (to anyone and/or anything) resulting directly and/or indirectly from my article. Ok, done with the formality, let's get rolling. 10. 9. 8. 7. 6. Mexican Red-Knee (Brachypelma smithi) Care Sheet. Mexican Red-Knee (Brachypelma smithi) When you ask most people about tarantulas, they tend to immediately describe the 'Red-knee' (B. smithi) that is a frequent film star in such diverse films as "Fierce Creatures", James Bond films and those classic B movies! 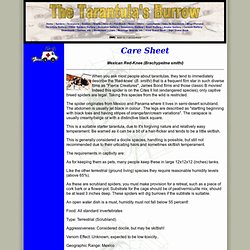 Indeed this spider is on the Cites II list (endangered species), only captive breed spiders are legal. Taking this species from the wild is restricted. The spider originates from Mexico and Panama where it lives in semi-desert scrubland. The abdomen is usually jet black in colour . This is a suitable starter tarantula, due to it's forgiving nature and relatively easy temperament. 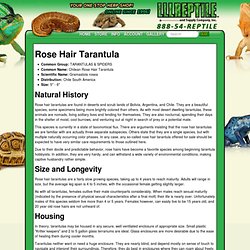 They are a beautiful species, some specimens being more brightly colored than others. As with most desert dwelling tarantulas, these animals are nomads, living solitary lives and fending for themselves. They are also nocturnal, spending their days in the shelter of moist, cool burrows, and venturing out at night in search of prey or a potential mate.