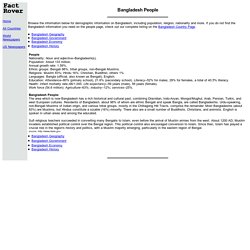 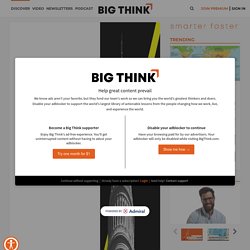 Across the country, Americans are flocking to malls, outlets, department stores, as well as online retail sites to get their loved one's gifts this holiday season. But this ritual of consumption has had a devastating effect on the planet, and particularly when it comes to fashion. The fashion industry is responsible for an alarming 10 percent of all of humanity's carbon emissions, thanks largely to the business model known as "fast fashion" that has come to dominate this century. The Fast Fashion Model Image source: live.staticflickr.com. Methane: The other important greenhouse gas. Methane is the primary component of natural gas – a common fuel source. 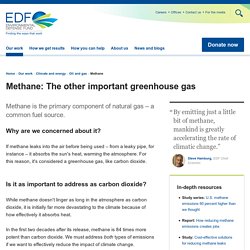 Why are we concerned about it? If methane leaks into the air before being used – from a leaky pipe, for instance – it absorbs the sun's heat, warming the atmosphere. For this reason, it's considered a greenhouse gas, like carbon dioxide. Is it as important to address as carbon dioxide? While methane doesn't linger as long in the atmosphere as carbon dioxide, it is initially far more devastating to the climate because of how effectively it absorbs heat. In the first two decades after its release, methane is 84 times more potent than carbon dioxide. About 25%of the manmade global warming we're experiencing is caused by methane emissions * Rana Plaza collapse: Sohel Rana jailed for corruption. BBC iPlayer - Breaking Fashion - Series 1: 5. Pop-Up. 'The True Cost' - Behind the Scenes. Fashion Industry Waste Statistics – E D G E.

An error has occurred - Birmingham City University. Is fast fashion giving way to the sustainable wardrobe? ELLE UK Dedicates September Issue To Sustainability. The groundbreaking issue addresses how the fashion industry and consumers can make meaningful changes to the way they work and shop to help the environment. 88% Of Consumers Want You To Help Them Make A Difference. Does your brand help people change the world for the better? 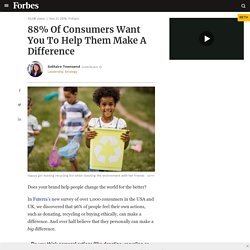 In Futerra’s new survey of over 1,000 consumers in the USA and UK, we discovered that 96% of people feel their own actions, such as donating, recycling or buying ethically, can make a difference. And over half believe that they personally can make a big difference. This is great news. 10 examples of great fashion marketing campaigns – Econsultancy. Fashion marketing campaigns tend to be creative, sometimes controversial, but always at the forefront of what’s cool. 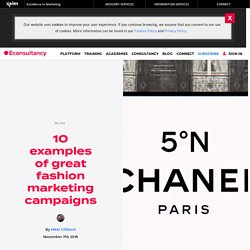 10 Brands Using Their Marketing Campaigns for the Greater Good. What do Emma Watson, Pharrell Williams and Will.i.am all have in common? 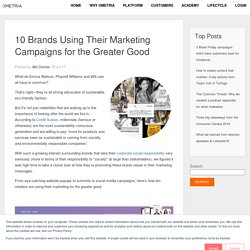 That’s right—they’re all strong advocates of sustainable, eco-friendly fashion. But it’s not just celebrities that are waking up to the importance of looking after the world we live in. According to Credit Suisse, millennials (famous or otherwise) are the most sustainability-conscious generation and are willing to pay “more for products and services seen as sustainable or coming from socially and environmentally responsible companies”. Green Is The New Black: Stitching Together Sustainable Fashion Brands. Can your style save the world? 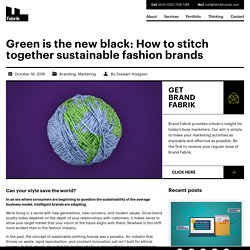 In an era where consumers are beginning to question the sustainability of the average business model, intelligent brands are adapting. We’re living in a world with new generations, new concerns, and modern values. Since brand loyalty today depends on the depth of your relationships with customers, it makes sense to show your target market that your vision of the future aligns with theirs. Nowhere is this shift more evident than in the fashion industry. In the past, the concept of sustainable clothing brands was a paradox. The Most Influential Sustainable Collection Campaigns of 2019: Part 1. Articles - The Top 5 Ad Campaigns To Take A Stand Against Fast Fashion Well Made Clothes. Whether we like it or not, our clothes say a lot about who we are on the inside. 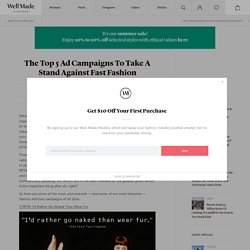 This is important, because it means that fashion can actually function as a form of activism. At least it can if we want it to. For many people it’s simply easier to continue buying a cheap new garment every week without too much thought about the fact this is in turn sending a message of support to big fast fashion conglomerations. You know, those guys behind dubious safety standards, rampant exploitation and the destruction of the natural environment. "Who Made My Clothes" Movement: History & Importance. The “Who Made My Clothes” movement was precipitated by the collapse of the Rana Plaza building 5 years ago. 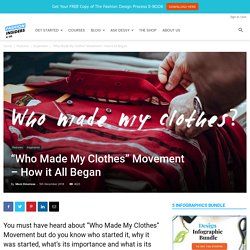 Not only did it take the lives of 1,138 clothes makers in Bangladesh, injuring 2,500, it also removed the blinkers on a capitalist fast fashion industry that should be renamed crapitalist. An industry where global brand owners think it’s acceptable to pay offshore factory workers a pittance while passing on a minuscule percentage of the saving to the public and lining their own hand finished pockets with the largest slice of the pie. In light of the fast fashion disaster, a much-needed revolution was necessary and it came about with the birth of the Fashion Revolution, the instigators of the movement.

Who Started the “Who Made My Clothes” Movement? The brainchild of two women, Orsola de Castro and Carry Somers this global campaign with participation in over 100 countries was launched in 2013 in England. About — Hannah Nathanson. A London-based writer and editor, I am currently Features Director at ELLE UK, where I commission and edit all features in the magazine, as well as writing regularly for elle.com/uk. 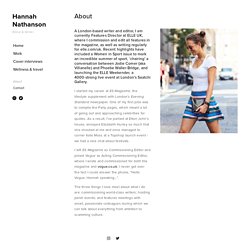 MEDIA — CLEAN CUT. Close the loop - Forsman & Bodenfors. Sustainable Sourcing Programme – ASOS plc. Corporate Responsibility We’re using our growing global reach to create, promote and sell products that are more socially and environmentally responsible. We’re also passionate about engaging our customers on sustainability. Dedicated Sustainable Sourcing team The Sustainable Sourcing team sits within ASOS’ Responsible Sourcing department and advises our retail teams and suppliers on how to design, source and innovate to create more sustainable products. By using our platform and social media reach the team also help to educate customers about sustainable products and encourage them to reduce their own environmental footprints. 57% of H&M Group's material mix is now sustainably sourced or recycled - Current Daily. 57% of all materials used by the H&M Group now come from either recycled or sustainable sources, according to its annual Sustainability Report released yesterday.

This is a considerable increase from last year, in which recycled or sustainably-sourced materials made up 35% of the company’s material mix – thus inching it closer to its ambitious circularity goals for 2030. “Big change requires bold actions and the courage to aim high. At the same time, we have to be humble to the challenges our planet is facing,” said Anna Gedda, head of sustainability at the H&M Group.”So if we want to make a real change, we have to be brave, push the boundaries and not be afraid to fail.” At present, 55.2% of the Group’s material mix is sourced from sustainable origins that are verified by third-party bodies. Birmingham City University - Sign In. Birmingham City University - Sign In.