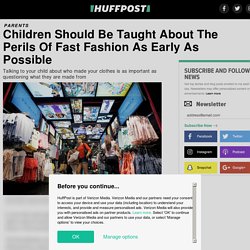 Verizon Media and our partners need your consent to access your device and use your data (including location) to understand your interests, and provide and measure personalised ads. Verizon Media will also provide you with personalised ads on partner products. Learn more. Prada’s Sustainable Re-Nylon Bags Are Made From Recycled Ocean Waste. Lots of luxury brands pride themselves on using only the finest leathers, silks and cashmeres in the world. 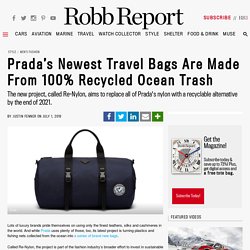 And while Prada uses plenty of those, too, its latest project is turning plastics and fishing nets collected from the ocean into a series of brand new bags. Called Re-Nylon, the project is part of the fashion industry’s broader effort to invest in sustainable alternatives. For Prada in particular, a brand that owes some portion of its success to its much-beloved nylon bags, using an eco-friendly form of the material makes perfect sense. Four factors fuelling the growth of fast fashion retailers – Econsultancy. The fast fashion industry is big business – and it’s only getting bigger. 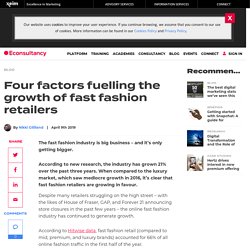 According to new research, the industry has grown 21% over the past three years. When compared to the luxury market, which saw mediocre growth in 2016, it’s clear that fast fashion retailers are growing in favour. Despite many retailers struggling on the high street – with the likes of House of Fraser, GAP, and Forever 21 announcing store closures in the past few years – the online fast fashion industry has continued to generate growth.

Style that’s sustainable: A new fast-fashion formula. The early 21st century has been good to the apparel industry. 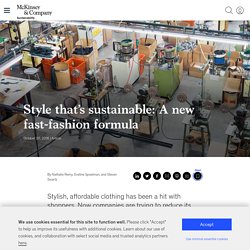 Thanks to falling costs, streamlined operations, and rising consumer spending, clothing production doubled from 2000 to 2014, and the number of garments purchased per capita between 2000 and 2014 increased by about 60 percent. Fast fashion has been a particularly hot segment and a source of enviable growth for some clothing companies. By compressing production cycles and turning out up-to-the-minute designs, these businesses have enabled shoppers not only to expand their wardrobes but also to refresh them quickly. Across nearly every apparel category, consumers keep clothing items about half as long as they did 15 years ago. 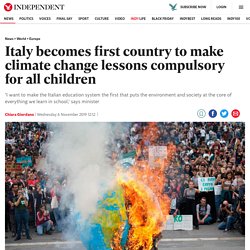 Lorenzo Fioramonti, the education minister, has announced all state schools will dedicate almost one hour per week to climate change issues from the start of the next academic year. Traditional subjects, such as geography, mathematics and physics, will also be studied from the perspective of sustainable development, said the former university economics professor. Download the new Indpendent Premium app Sharing the full story, not just the headlines The minister said: “The entire ministry is being changed to make sustainability and climate the centre of the education model. “I want to make the Italian education system the first education system that puts the environment and society at the core of everything we learn in school.” 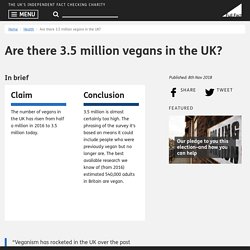 The Vegan Society offers the much lower figure of 600,000 vegans”The Guardian, 1 November 2018 This isn’t the first time this claim has been made, a number of headlines and articles reported the figures earlier in the year. It’s based on a survey of UK adults commissioned by the price comparison website Compare the Market. Previous estimates we’ve covered suggest that there are around half a million vegan adults in Great Britain, so we were interested to investigate this new figure. The survey from Compare the Market didn’t actually ask people whether they were currently vegan, but whether they had ever become vegan for environmental reasons, without confirming whether they still were. Innovation. Used in every product we make, TempShield™ is our double wall, vacuum insulated technology that guards the temperature of your drink. 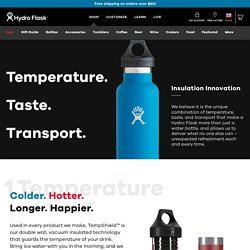 Bring ice water with you in the morning, and we promise you’ll still have ice in the afternoon. Hectic morning getting in the way of your coffee sipping? Moodle. In just five years, Los Angeles based fashion brand Reformation has become a cult brand for cool girls selling only direct-to-consumer through their online shop and three physical boutiques, one in downtown Los Angeles and two in New York City. 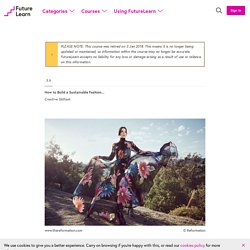 Reformation has grown not only sales but has expanded its product range and team year-on-year and is projected to triple its sales this year alone. So what is Reformation’s recipe for business success? Reformation “makes killer clothes that don’t kill the environment.” Every Reformation product is designed, made, photographed and shipped from their innovative eco-facility in downtown Los Angeles.

And each style is made using repurposed vintage clothing, salvaged deadstock fabric or new sustainable materials. Fit For Purpose. Inside The V&A Fashioned From Nature Exhibition. I think if we are going to change our mind-sets and the way we consume, we need to remind ourselves what we really value about nature,” Edwina Ehrman, the curator of the new V&A exhibition affirms at a private preview. 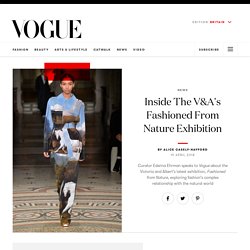 “One very human way in which we've expressed our delight in nature, our pleasure in it, our curiosity to learn more about nature is through textiles and fashion.” Spanning 400 years, Fashioned From Nature, opening at the Victoria and Albert museum on April 21st, explores the garments and accessories that have been inspired by nature's awesome power and beauty throughout history but also investigates fashion's impact on the natural world and the devastating effects of manufacturing on our environment. School climate strikes: 1.4 million people took part, say campaigners. More than 1.4 million young people around the world took part in school strikes for climate action, according to environmental campaigners. 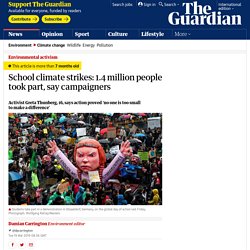 Greta Thunberg, the 16-year-old Swedish student whose solo protest last August prompted the global movement, said: “We proved that it does matter what you do and that no one is too small to make a difference.” Children walked out of schools on Friday in 2,233 cities and towns in 128 countries, with demonstrations held from Australia to India, the UK and the US, according to the Fridays for the Future website. Further strikes are planned for 12 April. Eyal Weintraub, an 18-year-old from Argentina who took part in the protests, said: “We have reached a point in history when we have the technical capacities to solve poverty, malnutrition, inequality and of course global warming. Is fast fashion giving way to the sustainable wardrobe?

Fashion shoppers spent about £3.5bn on Christmas party clothing this year – but 8 million of those sparkly items will be on their way to landfill after just one wear. So-called fast fashion has ushered throwaway culture into the clothing business, with items so cheap they have become single-use purchases. Last week, the young-fashion brand Boohoo had 486 dresses available online for less than £5.

Many – like a black bandeau jersey bodycon number – were just £3.75, meaning the delivery charge cost more than the contents of the package. 21 Young People Tell Us Why They Wore Second-Hand Clothing to the Climate Strike 2019. “We strike for you! We strike for us!” Thousands of protestors chanted this past Friday, September 20, gathering in cities across the globe in support of the climate strike. Teenagers say they feel under pressure to save the planet from climate change and plastic pollution.

The majority of young people feel their generation is under pressure to solve environmental issues such as climate change and plastic pollution. To coincide with World Environment Day, which falls on 5 June 2019, The Body Shop polled 1,000 teenagers (aged 14-16) about their attitudes towards sustainability. Turning teenagers on to the benefits of being green. Most teenagers want to be considered "cool". But do they also want to be thought of as green – in the environmental sense of the word, that is?

Trying to make greenness equate with cool is the focus of a new three-year research project involving five British universities sharing £1.5m from the Engineering and Physical Sciences Research Council. The scheme has been christened Teddi, which doesn't sound particularly cool, but does condense into a handy acronym the stated aims of Transforming Energy Demand through Digital Innovation. Parents may yet be inadvertent beneficiaries of the scheme – the ones who follow teenage offspring around the house, switching off lights, computers, televisions, mobile chargers and hairdryers, while still receiving electricity bills only slightly lower than the gross national product of Albania.

"Most teenagers are non-bill-paying consumers," says the project leader, Dr Janet Read, a computer scientist at the University of Central Lancashire. Want to teach ethical fashion to kids? Here's how. How much did your outfit cost? Chances are, much more than you think. The clothing industry is the second-largest global polluter – after oil – and its complex production techniques and supply chains create a myriad of environmental issues. It takes 2,700 litres of water to make one t-shirt, and an estimated £140m worth of clothing [pdf] goes to landfill sites in the UK annually. The need for change is urgent – and education can play a key role in championing new attitudes towards clothing.

Some schools are now working with organisations to explore the impact of the fast fashion industry. “The clothing business model is built on volume and getting the clothes produced as cheaply and quickly as possible – buy cheap, wear a few times and then throw away. Primark: high street cheer on the cheap. BBC Three - Breaking Fashion - Available now. Four factors fuelling the growth of fast fashion retailers – Econsultancy. Generation Z & The Fast Fashion Paradox. Fast fashion certainly isn’t a recent phenomenon, but it’s these online-only retailers that are giving new meaning to the term, churning out low-priced dresses, bikinis and bodysuits at breakneck speed. And unlike traditional high street stores, their digital-first business model translates to much lower overheads, allowing them to slash prices and dedicate budgets to targeted marketing campaigns.

RePack: The Reusable Home Delivery Packaging System from Finland Rings Up Awards. Delivery with RePack - Made & More. Sustainable Packaging Alternatives For The Fashion Industry. Compostable Mailers. 21 Young People Tell Us Why They Wore Second-Hand Clothing to the Climate Strike 2019. Teenagers say they feel under pressure to save the planet from climate change and plastic pollution. Turning teenagers on to the benefits of being green. Zara Aims for 100% Sustainable Fabrics by 2025. Napapijri's Newest "Infinity" Jacket Is 100% Recyclable. Adidas & Parley for the Oceans Explain Their Eco-Friendly Shoes. Adidas has sold 1 million pairs of sneakers made from ocean trash. Our stuff.