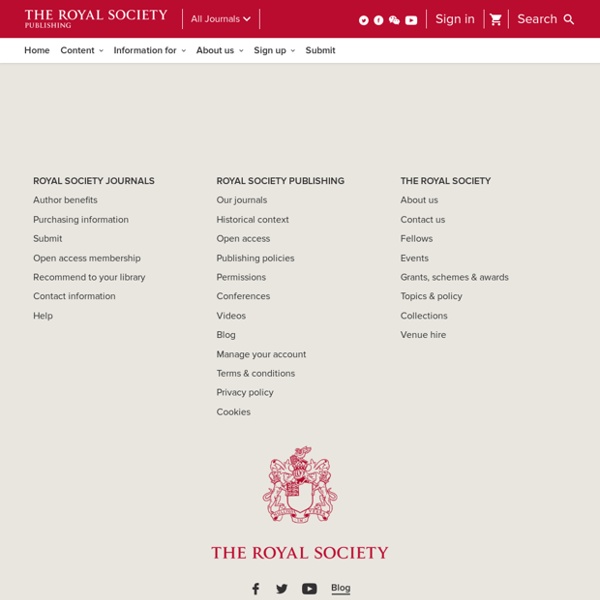 sciencealert The first complete map of a platypus genome has just been released, and it's every bit as strange as you'd expect from a creature with 10 sex chromosomes, a pair of venomous spurs, a coat of fluorescent fur, and skin that 'sweats' milk. The duck-billed platypus is truly one of the oddest creatures on Earth. Along with the spiky echidna, these two Australian animals belong to a highly-specialised group of mammals, known as monotremes, which both lay eggs but also nurse their young with milk.

Crab blood to remain big pharma's standard as industry group rejects substitute Horseshoe crabs’ icy-blue blood will remain the drug industry’s standard for safety tests after a powerful US group ditched a plan to give equal status to a synthetic substitute pushed by Swiss biotech Lonza and animal welfare groups. The crabs’ copper-rich blood clots in the presence of bacterial endotoxins and has long been used in tests to detect contamination in shots and infusions. More recently, man-made versions called recombinant Factor C (rFC) from Basel-based Lonza and others have emerged. An industry battle has been brewing, as another testing giant, Lonza’s US-based rival Charles River Laboratories, has criticised the synthetic option on safety grounds. Maryland-based US Pharmacopeia (USP), whose influential publications guide the drug industry, had initially proposed adding rFC to the existing chapter governing international endotoxin testing standards. USP has now abandoned that, it announced late on Friday, opting instead to put rFC in a new stand-alone chapter.

Review: Use of human-edible animal feeds by ruminant livestock Crossref Citations This article has been cited by the following publications. This list is generated based on data provided by CrossRef. Bai, Zhaohai Ma, Wenqi Ma, Lin Velthof, Gerard L. Wei, Zhibiao Havlík, Petr Oenema, Oene Lee, Michael R. F. and Zhang, Fusuo 2018. Results Page The target based query area provides filtering options to search the CHEOPS Archive on the basis of target related meta-data. The filters available are the following: Target Name: Auto complete text box to filter by the name of the observed targets, that are currently stored at the CHEOPS Archive. The auto completion uses a case-insensitive search for the substring entered in the text box. Ignore the conspiracy theories: scientists know Covid-19 wasn't created in a lab In a recent interview with the Telegraph, the former head of MI6 Sir Richard Dearlove cited an “important” scientific report that suggested that the novel coronavirus had not emerged naturally, but had been created by Chinese scientists. Dearlove said he believed the pandemic had “started as an accident” after the virus escaped the lab. A month earlier, the US secretary of state, Mike Pompeo, had said he had “enormous evidence” that Covid-19 had originated in a lab in China, only to backtrack from this claim on live TV in the same sentence. Suggestions that Covid-19 is a manmade virus are the latest chapter in a tale of blame, misinformation and finger-pointing. Cue the conspiracy theorists, marching out their narrative about the high-security BSL-4 lab in Wuhan, where mysterious experiments to design “frankenviruses” led to the tragic global pandemic. Determining the origins and emergence of a pandemic is as messy and complex as studying a plane crash.

Sustainability of meat-based and plant-based diets and the environment Skip to Main Content Advertisement Search Close CHEOPS Data - CHEOPS Guest Observers Programme - Cosmos Observations made with CHEOPS are available for download from the CHEOPS mission archive which can be found at this link. Proprietary data can only be downloaded by the respective principle investigators using login-credentials, however public data is freely accessible. A selection of different types of CHEOPS data is available to help users both to determine the capabilities of CHEOPS (simulated data and data taken during in-orbit commissioning) and to re-reduce any CHEOPS data that they have with their own, bespoke pipelines (reference files).

Pandemics result from destruction of nature, say UN and WHO Pandemics such as coronavirus are the result of humanity’s destruction of nature, according to leaders at the UN, WHO and WWF International, and the world has been ignoring this stark reality for decades. The illegal and unsustainable wildlife trade as well as the devastation of forests and other wild places were still the driving forces behind the increasing number of diseases leaping from wildlife to humans, the leaders told the Guardian. They are calling for a green and healthy recovery from the Covid-19 pandemic, in particular by reforming destructive farming and unsustainable diets.

Animal Feed As farming has industrialized, the interdependent agricultural cycle of plants and animals has been disconnected. Animals raised for meat and other products are given feed formulated to speed their growth to market weight, rather than the grasses, insects, seeds and other foods they would naturally eat. Advocates of industrial farming argue that today’s feed is specially formulated to supply all essential nutrients; however, such grain-based diets can produce serious and sometimes fatal digestive problems in ruminants (including cows, goats and sheep), whose stomachs are evolved to naturally digest grass, not grain. For hogs and poultry in confinement, both the formulation of feed and the frequency of feeding are designed to accelerate growth at unhealthy rates.

sans titre It is improbable that SARS-CoV-2 emerged through laboratory manipulation of a related SARS-CoV-like coronavirus. As noted above, the RBD of SARS-CoV-2 is optimized for binding to human ACE2 with an efficient solution different from those previously predicted7,11. Furthermore, if genetic manipulation had been performed, one of the several reverse-genetic systems available for betacoronaviruses would probably have been used19. Coronavirus is a warning to us to mend our broken relationship with nature In 1997, a large area of rainforest in south-east Asia was burned to the ground to make way for palm oil plantations. A combination of deforestation, forest fires and drought are believed to have forced hundreds of fruit bats away from their natural habitats towards fruit orchards planted in close proximity to intensive pig farms. These conditions led to the emergence of the Nipah virus, which spilled over from infected bats to pigs, and from pigs to pig farmers. Over the next two years, the disease would kill more than 100 people. This should have served as a warning. Now, 20 years later, we are facing a health crisis of an altogether different scale, with Covid-19 causing the most tragic health, social and economic crisis in living memory.