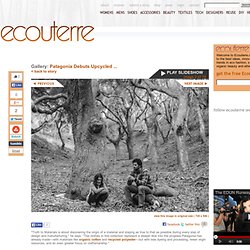 “The clothes in this collection represent a deeper dive into the progress Patagonia has already made—with materials like organic cotton and recycled polyester—but with less dyeing and processing, fewer virgin resources, and an even greater focus on craftsmanship.” Patagonia partnered with kindred companies to bring its collection to fruition. Italy’s Figli di Michelangelo Calamai supplied the reclaimed wool, which it creates from discarded wool sweaters that have been shredded into usable fiber, then mixed with polyester and nylon for reinforcement.

RELATED | Patagonia Wants to Promote a “Responsible Economy” TAL Group sweeps the floors of their factories in China and Malaysia for “useless” cotton scrap, which it respins into good-as-new fabrics that require neither bleaching nor dyes. . + Truth to Materials + Patagonia. Pharrell Williams Launches Denim Line Made From Recycled Ocean Debris. Singer, songwriter, and producer Pharrell Williams has a hit new album out and collaborated on last summer’s two hottest songs (“Get Lucky” and “Blurred Lines.”) 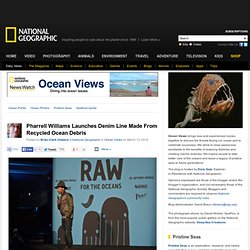 And now he can add sustainable fashion to his list of accomplishments. Williams answered questions from Ocean Views (below) on his latest project with clothing maker G-Star RAW. In addition to his roles in the music business, Williams is the creative director of Bionic Yarn, a company that makes yarn and fabrics out of recycled plastic bottles. The two companies have launched a line of denim they call “RAW for the Oceans,” featuring jeans made from recycled plastic that is reclaimed from the ocean. It is set to hit G-Star stores August 2014. G-Star RAW has collaborated with Bionic Yarn on The Vortex Project, an initiative started by global nonprofit Parley, who come up with ways to turn the plastic in the oceans into useful stuff.

How will the bottles be collected from the ocean? Will the material be degraded in the ocean? Sweden reveals world's first garment made entirely from recycled cotton. In the future, we could add nutrients to clothes and compost them, but dyes are current barrier to this solution. 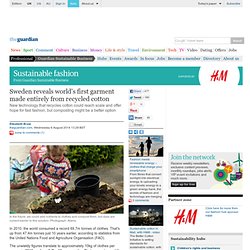 Photograph: Alamy In 2010, the world consumed a record 69.7m tonnes of clothes. That's up from 47.4m tonnes just 10 years earlier, according to statistics from the United Nations Food and Agriculture Organisation (FAO). The unwieldy figures translate to approximately 10kg of clothes per person in 2013, up from 6.7kg 10 years earlier. That may not sound like a lot but the world population is growing, as are our western habits. "Until now old clothes have often been used as filler material for underneath wall-to-wall carpeting, but when the carpeting is removed or the building is knocked down, the material goes to the landfill anyway," says Lewis Perkins, senior vice president of the San Francisco-based Cradle to Cradle Products Innovation Institute, which develops sustainable new uses for discarded products. 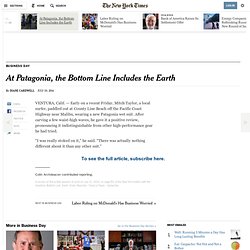 After carving a few waist-high waves, he gave it a positive review, pronouncing it indistinguishable from other high-performance gear he had tried. “I was really stoked on it,” he said. “There was actually nothing different about it than any other suit.” And yet there was. Patagonia executives are also convinced that the many years of development and testing they have supported have resulted in a revolutionary material that will wind up not only in wet suits but also in everyday items like sneakers and yoga mats. Photo But if they have their way, only a few of those products will bear the Patagonia name. Patagonia’s promotion of Yulex is the latest example of its unusual commitment to advancing sustainability, sometimes at the expense of its bottom line.