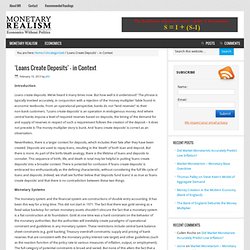 We’ve heard it many times now. But how well is it understood? The phrase is typically invoked accurately, in conjunction with a rejection of the ‘money multiplier’ fable found in economic textbooks. From an operational perspective, banks do not “lend reserves” to their non-bank customers. Nevertheless, there is a larger context for deposits, which includes their fate after they have been created. Monetary Systems The monetary system and the financial system are constructions of double entry accounting. The Choice for Banking Starting from this monetary bookkeeping foundation, a fundamental choice exists. ‘Loans Create Deposits’ When we say ‘loans create deposits’, we mean at least that the marginal impact of new lending will be to create a new asset and a new liability for the banking system – typically for the originating lending bank at first. Money Markets The Money Multiplier Fable Central Bank Reserve Injections The Growth Dynamic.

Krugman on Say’s Law. Here: Still Say’s Law After All These Years “When John Maynard Keynes wrote The General Theory, three generations ago, he structured his argument as a refutation of what he called “classical economics”, and in particular of Say’s Law, the proposition that income must be spent and hence that there can never be an overall deficiency of demand. 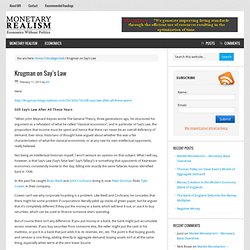 Ever since, historians of thought have argued about whether this was a fair characterization of what the classical economists, or at any rate his own intellectual opponents, really believed. Not being an intellectual historian myself, I won’t venture an opinion on that subject. What I will say, however, is that Say’s Law (Say’s false law? In the past I’ve caught Brian Riedl and John Cochrane doing it; now Peter Dorman finds Tyler Cowen in their company. Cowen can’t see why corporate hoarding is a problem.

DOES ANYONE KNOW WHAT MODERN MONETARY THEORY IS? TC Fiscal Policy Rule. There has been a bit of noise around the blogs about fiscal rules. 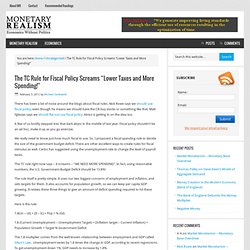 We really need to know just how much fiscal to use. The TC rule right now says – it screams – “WE NEED MORE SPENDING”. The rule itself is pretty simple. Here is the rule: 1.8(Uc – Ut) + (It – Ic) + Pop = % (Gt) 1.8 (Current Unemployment – Unemployment Target) + (Inflation target – Current inflation) + Population Growth = Target % Government Deficit The 1.8 multiplier comes from the well known relationship between employment and GDP called Okun’s Law. Some people are worried about inflation, and I am a bit too. I suggest using 4% for an unemployment target. Modern Monetary Realism. Monetary Realism and MMT « The Traders Crucible. Home > Main > Monetary Realism and MMT Hi Everyone, Cullen Roche has a post up over at Pragmatic Capitalism about a new project we’re working on together. 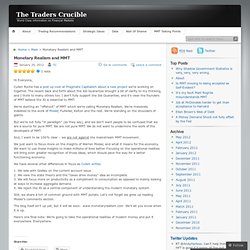 The recent back and forth about the Job Guarantee brought a bit of clarity to my thinking, and I think to many others too. I don’t fully support the Job Guarantee, and it’s clear the founders of MMT believe the JG is essential to MMT. We’re starting an “offshoot” of MMT which we’re calling Monetary Realism. But we’re not fully “in paradigm” (as they say), and we don’t want people to be confused that we are a source for pure MMT. And, I want to be 100% clear – we are not against the mainstream MMT movement.

We just want to focus more on the insights of Warren Mosler, and what it means for the economy. We have several other differences in focus as Cullen writes: 1. Still, we share a ton of common ground with MMT purists. MONETARY REALISM. What is Monetary Realism (MR)? 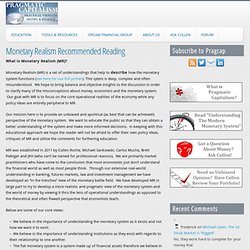 Monetary Realism (MR) is a set of understandings that help to describe how the monetary system functions (see here for our full primer). This sytem is deep, complex and often misunderstood. We hope to bring balance and objective insights to the discussion in order to clarify many of the misconceptions about money, economics and the monetary system. Our goal with MR is to focus on the core operational realities of the economy while any policy ideas are entirely peripheral to MR.

Our mission here is to provide an unbiased and apolitical (as best that can be achieved!) MR was established in 2011 by Cullen Roche, Michael Sankowski, Carlos Mucha, Brett Fiebiger and JKH (who can’t be named for professional reasons). Below are some of our core views: To obtain a better understanding of Monetary Realism we recommend the following reading (some of which is quite advanced): 1. 2. 3.