When Emotions Go Up, Intelligence Goes Down. I promised in last month’s article that I was going to teach from some very painful lessons I went through. 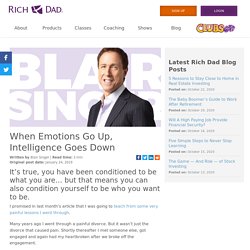 Many years ago I went through a painful divorce. But it wasn’t just the divorce that caused pain. Shortly thereafter I met someone else, got engaged and again had my heartbroken after we broke off the engagement. The 10 Principles of Self-Made Billionaires. Billionaires have something most of us don’t. 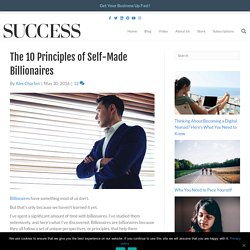 But that’s only because we haven’t learned it yet. I’ve spent a significant amount of time with billionaires. I’ve studied them extensively, and here’s what I’ve discovered: Billionaires are billionaires because they all follow a set of unique perspectives, or principles, that help them persevere where others find challenges. I call these 10 principles “The Billionaires’ Success Framework.” Vistage: The World’s Largest Executive Coaching Organization. 7 Things I Wish I Had Known Sooner in Life. Transgender satanist anarchist whose slogan is "F the police" wins GOP nomination for NH county sheriff. He calls himself a She-Male and "she's" gloating over her primary win which will pit her against four term, incumbent Democrat Eli Rivera for the office of Cheshire County, NH, Sheriff this November. 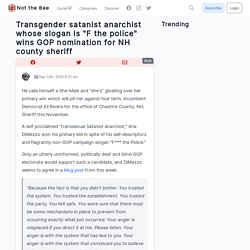 A self proclaimed "transsexual Satanist anarchist," Aria DiMezzo won his primary bid in spite of his self-descriptors and flagrantly non-GOP campaign slogan "F*** the Police. " Only an utterly uninformed, politically deaf and blind GOP electorate would support such a candidate, and DiMezzo seems to agree in a blog post from this week. "Because the fact is that you didn't bother. You trusted the system. You trusted the establishment. 12 Leadership Lessons with NerdWallet CEO Tim Chen. August 31, 2020 7 min read Opinions expressed by Entrepreneur contributors are their own. 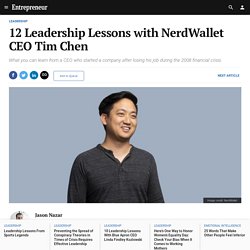 For many years, I had the privilege of interviewing tech founders and CEOs on stage before an audience of entrepreneurs and investors as part of my Startups Uncensored monthly event in Southern California. During the quarantine, I revived the fireside chat series for a virtual audience with the C-suite leaders of including , Zoom Video and , and I recently partnered with Entrepreneur to host a new series entitled “If I Knew Then .” During these one-hour sit-downs with high-profile CEOs of global brands, from Waze to Blue Apron, we talk about the hard-won lessons they’ve learned along the way and the practical career advice they’d give other entrepreneurs. Rohn: 7 Personality Traits of a Great Leader.

If you want to be a leader who attracts quality people, the key is to become a person of quality yourself. 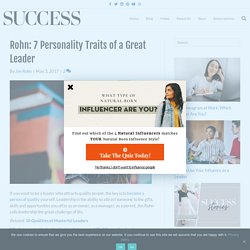 Leadership is the ability to attract someone to the gifts, skills and opportunities you offer as an owner, as a manager, as a parent. Jim Rohn calls leadership the great challenge of life. Related: 10 Qualities of Masterful Leaders. How to Create a Bulletproof Morning Routine. I woke at noon and saw no reason to get out of bed. 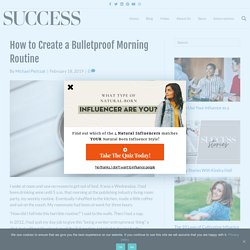 It was a Wednesday. I had been drinking wine until 5 a.m. that morning at the publishing industry living room party, my weekly routine. Eventually I shuffled to the kitchen, made a little coffee and sat on the couch. My roommate had been at work for three hours. “How did I fall into this horrible routine?” In 2012, I had quit my day job to give this “being a writer-entrepreneur thing” a shot, but without the structure of the 9-5 routine, I started behaving badly. Yesterday I got up at 6 a.m., ran 3 miles to the beach, lifted weights and meditated with the sunrise. 15 Qualities of Mentally Tough People. Mental toughness is a choice and a discipline, not an innate quality bestowed upon the lucky. 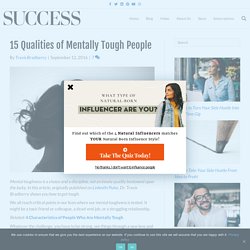 In this article, originally published on LinkedIn Pulse, Dr. Travis Bradberry shows you how to get tough. We all reach critical points in our lives where our mental toughness is tested. It might be a toxic friend or colleague, a dead-end job, or a struggling relationship. Related: 4 Characteristics of People Who Are Mentally Tough Whatever the challenge, you have to be strong, see things through a new lens and take decisive action if you want to move through it successfully. It sounds easy. 7 Powerful Habits of People With High Emotional Intelligence.

Think about the people you know who always seem to get what they want. 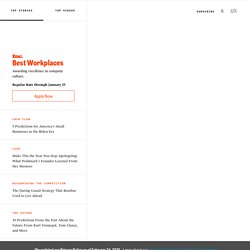 Are they self-centered? Are they their own best advocates? When you think of their success, do you feel happy for them? Do you admire them? If you don't, let's assume for our purposes that other people don't admire them either. And if you do admire them, think about that, too. Another word for feelings: emotions. Habits like these, for example. 10 Women Entrepreneurs Who Are Shattering the Glass Ceiling. July 13, 2020 8 min read Opinions expressed by Entrepreneur contributors are their own. 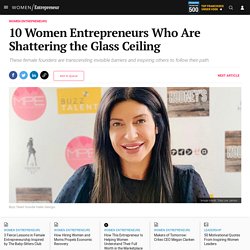 As an and established businesswoman, I'm often asked if females still have to face the sort of obstacles and hurdles that males do not have to contend with. In other words, is it still a struggle for a to succeed in the world of , an environment that many still consider to be male-dominated? As is often the case with big questions, the answer is complicated. Untitled. Like Bill Gates's all-time favorite book, Steven Pinker's Enlightenment Now, Factfulness uses statistics from a wide variety of reputable sources to show that the world is becoming a better place thanks to reason, science, and technology. 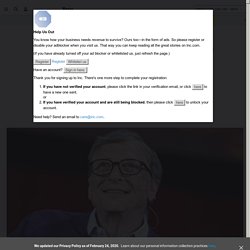 This opinion, widely shared in high tech, runs precisely contrary to the popular perception (often promoted by ultra-conservative billionaires who profit from the misconception) that the world is going to hell in the proverbial hand-basket. This is not to say that Gates believes the world will improve itself automatically. Quite the contrary. Gates is arguably the greatest and most effective philanthropist the world has ever seen, in addition to being one of the greatest living entrepreneurs.

Untitled. Untitled. Untitled. 5 ways to develop your executive presence. Untitled. Said Bezos: "When you're 80 years old, and in a quiet moment of reflection narrating for only yourself the most personal version of your life story, the telling that will be most compact and meaningful will be the series of choices you've made. " Valuable advice followed in the form of 12 questions Bezos asked his audience to reflect upon deeply to help build a great life story. Here they are, meshed with my own perspective. 1.

Untitled. There’s no such thing as an overnight success. All the successful people you admire achieved their success by making daily choices. Untitled. It’s easy to think self-made billionaires just got lucky. Maybe they were in the right place at the right time. Or maybe they stumbled across a discovery that made them a ton of money overnight. But I’ve had the incredible fortune of being around and personally consulting to a number of self-made billionaires—even some as they ascended to billionaire-status—and I can tell you all of that is unequivocally false. Not even close. Every self-made billionaire I’ve ever met or studied has something in common. You’ve seen them recently in the likes of Steve Jobs, Elon Musk, Richard Branson and Oprah Winfrey, and historically in Andrew Carnegie, Henry Ford and John D.

Untitled. Untitled. By: Anuradha It is not easy to identify a narcissist at first. They are too charming and easy to be with at the first phase and you would probably get caught in their mesh if you are not cautious about the moves that you make. Especially, if your life partner is a narcissist, things can go really hard for you and you will know the danger that you make yourself fall into only at the last moment and it can be too late by then.

Untitled. 25 Japanese Proverbs with massive life lessons. Japan has known all over the world for their highly civilized culture, hard work and especially as a highly advanced and skilled nation in technology. They don’t embrace modernity for trend and forget the history; instead they insist to remember their roots, get inspired, follow them and even pass them to next generations. 5 Lessons From Billionaires That Your 'Startup Self' Should Follow. Highly Confident People Avoid These 14 Behaviors. An organization is never more confident than its leader, which accentuates the importance for leaders to display unswerving confidence in themselves, their vision, their strategy, and their people.

6 Things the Most Successful Women Have in Common. Sometimes you can spot a successful woman in the wild without knowing anything about her. 11 Qualities of a Leader Worth Following. YouTube. Why the Most Successful Leaders Don't Care About Being Liked. So, when does wanting to be liked become a problem? When it comes at the expense of being respected. The 10 Principles of Self-Made Billionaires. Handle Negative Feedback Like a Pro: 6 Expert Tips. To accomplish that growth, however, companies need to respond to the feedback they receive the right way, so as to show a willingness and openness to change and to avoid alienating their audience. That's often easier said than done, as criticism typically triggers strong emotions and a defensive attitude. To help, these six entrepreneurs share their best tips on how to handle negative feedback graciously.

Google discovered 10 traits of the best managers after a huge failure. The hypothesis was that the quality of a manager doesn't matter and that managers are at best a necessary evil, and at worst a useless layer of bureaucracy. After Giving 1,000 Interviews, I Found the 4 Questions That Actually Matter. If there's one thing that keeps every founder up at night, it's hiring. Business advice: How I turned my $30,000 yearly income monthly by 28. The 7 Basic Human Needs That Successful Businesses Focus On. To Truly Enjoy Your Vacation, Use This Brilliant Auto-Reply at Work. How Can You Spot Really Good Leaders? They Do Any of These 7 Things Daily.

The surprisingly frugal habits of 9 billionaires. 10 Attributes of Self-Made Billionaires. The 1 Thing Successful Parents Don't Make Their Kids Do, According to Science. 14 rich and powerful people share their surprising definitions of success. 28 Entrepreneurs Explain Why They Started Their Business – Hearpreneur. Yesterbox: The Weird Inbox Zero System From the CEO of Zappos. This Billionaire CEO's Trick for Managing Emails Will Make You Insanely Productive.

CEO Q&A: What Is Your Management Style? It Took Steve Jobs Less Than 60 Seconds to Share the Best Leadership Advice You'll Hear Today. Neuroscience Just Revealed That Your Brain Prefers This to Bullet Points in Presentations. 10 Takes From Bhavin Turakhia On Tech. How Can You Really Tell Someone Is an Exceptional Leader? Ask This 1 Simple Question.

Steve Jobs Said 1 Key Trait Truly Sets Successful People Apart: 8 Ways to Develop Remarkable Perseverance. Warren Buffett Says Whom You Work for Matters to Your Success. Here's a Perfect Example of Such a Leader. How to Make Being CEO a Little Less Lonely. Big Key to Making Tough Decisions. Success By Demand. 30 Behaviors of Unstoppable People. Become a Fantastic Listener With These 9 Techniques. The Sooner You Accept These 13 Brutal Truths About Life The Better Your Life Will Become. Mentally Strong People Never Do These 6 Things. 5 Signs Your Personality Is So Strong It’s Intimidating Others (Never Tolerate #2) 6 Rules to Managing Yourself So You Can Manage Others. New Study Shows a Whopping 76 Percent of Bosses Are Toxic (in These 4 Avoidable Ways) A 40-Year-Study Found That Kids Who Do This Are More Likely to Earn the Most Money When They Grow Up.

This Is the Greatest Form of Emotional Intelligence. Practicing It Will Make You a Respected Leader. The 7 Best Ways to Stop Micromanaging. Guy Gets Fired, Makes Management Regret Their Decision In The Best Way. Money. When CEO Satya Nadella joined Microsoft, he started diffusing its toxic culture by handing each of his execs a 15-year-old book by a psychologist. It Took Jeff Bezos Exactly 5 Words to Teach a Major Lesson in Emotional Intelligence. My Company Implemented a 5-Hour Workday — and the Results Have Been Astounding. How Calvin Graham Became World War II's Youngest Decorated Veteran. These Are the 19 Richest Tech Billionaires in the World.