AWAKENING. GREEN BRYANT. Soil. Permaculture. Soil texture by feel - Soil Doctor. In a strange and distant land the happy village life is thrown into turmoil by a fire breathing dragon. 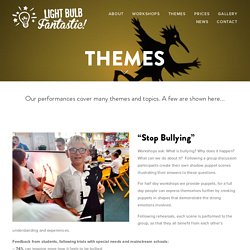 Their survival threatened, two youngsters, Fizz and Boon, with the help of the audience, use the magic powers of ratio to save the day. Research into common misconceptions surrounding ratio informs the dialogue. Feisty Fizz confronts her personal fear of maths and discovers that failing is the the pathway to learning. Various ratios are demonstrated in a range of situations, as objects and figures. Comparison to fractions is clearly illustrated. Audience participation is key to “Ho-Ratio” being a memorable experience and the live dialogue can be adapted to differentiate for learners’ abilities. Approximate running time 45 minutes. Key Stage 2 Curriculum objectives:• Recognise and use the ratio notation a:b• Calculate simple ratios of quantities. 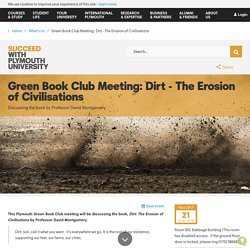 Dirt, soil, call it what you want - it's everywhere we go. It is the root of our existence, supporting our feet, our farms, our cities. This fascinating yet disquieting book finds, however, that we are running out of dirt, and it's no laughing matter. An engaging natural and cultural history of soil that sweeps from ancient civilisations to modern times, Dirt: The Erosion of Civilisations explores the compelling idea that we are - and have long been - using up Earth's soil. Once bare of protective vegetation and exposed to wind and rain, cultivated soils erode bit by bit, slowly enough to be ignored in a single lifetime but fast enough over centuries to limit the lifespan of civilisations. All are welcome to this free event and it is not essential to have read any or all of the book. Making Biochar at Maya Mountain Research Farm. Everything You Know About Composting is Wrong: Mike McGrath at TEDxPhoenixville.

Humus - the essential ingredient: Graeme Sait at TEDxNoosa. Joel Salatin at TEDMED 2012. About Us – Our Story. Bio char. Managing soil carbon: Data available on Soil organic Carbon. Soil health. Soil health is a state of a soil meeting its range of ecosystem functions as appropriate to its environment. 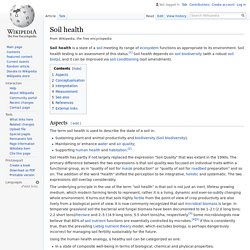 Soil health testing is an assessment of this status.[1] Soil health depends on soil biodiversity (with a robust soil biota), and it can be improved via soil conditioning (soil amendment). Aspects[edit] The term soil health is used to describe the state of a soil in: Sustaining plant and animal productivity and biodiversity (Soil biodiversity);Maintaining or enhance water and air quality;Supporting human health and habitation.[2] Soil Health has partly if not largely replaced the expression "Soil Quality" that was extant in the 1990s. The underlying principle in the use of the term “soil health” is that soil is not just an inert, lifeless growing medium, which modern farming tends to represent, rather it is a living, dynamic and ever-so-subtly changing whole environment. 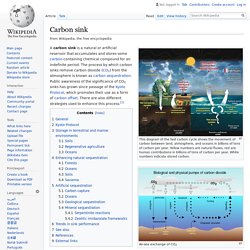 Yellow numbers are natural fluxes, red are human contributions in billions of tons of carbon per year. White numbers indicate stored carbon. A carbon sink is a natural or artificial reservoir that accumulates and stores some carbon-containing chemical compound for an indefinite period. The process by which carbon sinks remove carbon dioxide (CO2) from the atmosphere is known as carbon sequestration. Public awareness of the significance of CO2 sinks has grown since passage of the Kyoto Protocol, which promotes their use as a form of carbon offset. General[edit] The natural sinks are: Absorption of carbon dioxide by the oceans via physicochemical and biological processesPhotosynthesis by terrestrial plants Natural sinks are typically much bigger than artificial sinks. 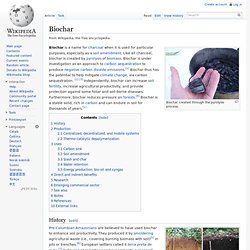 History[edit] Left - a nutrient-poor oxisol; right - an oxisol transformed into fertile terra preta using biochar Pre-Columbian Amazonians are believed to have used biochar to enhance soil productivity. They produced it by smoldering agricultural waste (i.e., covering burning biomass with soil)[5] in pits or trenches.[6] European settlers called it terra preta de Indio.[7] Following observations and experiments, a research team working in French Guiana hypothesized that the Amazonian earthworm Pontoscolex corethrurus was the main agent of fine powdering and incorporation of charcoal debris to the mineral soil.[8] The term “biochar” was coined by Peter Read to describe charcoal used as a soil improvement.[9]

How to Compost: 7 Steps. Dirt! The Movie (FULL) Symphony of the Soil. 2015 International Year of Soils.