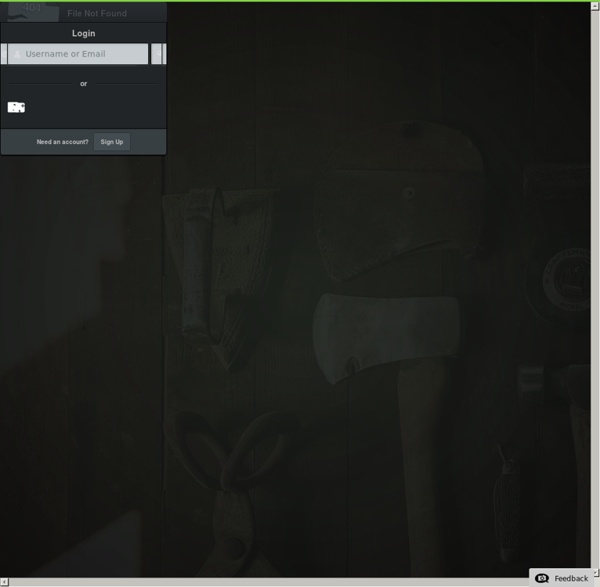 The Simple Intro to SVG Animation This article serves as a first step toward mastering SVG element animation. Included within are links to key resources for diving deeper, so bookmark this page and refer back to it throughout your journey toward SVG mastery. An SVG element is a special type of DOM element that mimics the syntax of a standard HTML element. SVG elements have unique tags, attributes, and behaviors that allow them to define arbitrary shapes -- essentially providing the ability to create an image directly within the DOM, and thereby benefit from the JavaScript- and CSS-based manipulation that DOM elements can be subjected to. As a teaser of what we're about to learn, check out these demos that are only possible thanks to SVG:

Greyprint I built it when I realised I’d follow the same ritual when starting a project, losing 5 or so minutes every time. New document. Create some guide boxes at the icon sizes I intend to work on. Duplicate. Duplicate. Lock them. How one software company overhauled its old school vibe. Volusion has a long and vibrant history as one of the top ecommerce software websites on the web. We were created in 1999 by web designer Kevin Sproles, who was just 16 and working out of his parents’ house. Since then we’ve never been an average company…but in late 2016 we realized that our site was looking decidedly average. As designers we felt like our old brand was not very well developed or clear, and was lacking in personality. We knew that we could improve the brand and website to attract our ideal customer.

DOTGRID Visit our website 100r.co for more information on our studio Hundredrabbits. Guide Clicking on the canvas will insert control points, up to 3CPs. CPs can be moved with the arrows. Clicking one of the path icons, or pressing one of the shortcuts, will draw a stroke between them. The newly created segment's handles can be moved by clicking and dragging them.

Animating SVG Files With SVGator We’re pretty excited by tools such as SVGator, which really speed up the process when you’re making simple SVG animations. Here’s how easy it is to use and how you can get a great-looking animation in no time. (This article is kindly sponsored by SVGator.) Animate SVG icons with CSS and Snap How to optimize SVG code and animate an SVG icon using CSS and Snap.svg library. Browser support ie Chrome Firefox Safari Opera 9+ Working with SVG files is not an option anymore.

Top 27 Examples of SVG Animations for Web Designers and Developers 2016 It’s a nice feature to have, to be able to have visual content on your website that looks equally the same on any device screen resolution. That’s what SVG does, it helps designers and artists to create visual web content that can scale infinitely without losing any imagery quality. An approach that is quickly being adapted to all new modern websites, though an approach that still requires more learning and practice. SVG is rising in popularity, but majority of designers today are still relying on traditional visual techniques.

The making of the new CodyHouse website – CodyHouse After almost a year of silence, here we are back on track with CodyHouse! We have a brand new Web Components section (content coming soon), we have started improving (and fixing) the nuggets published in the past, and of course, we have a new website! 🙂 Here are some insights on how we built CodyHouse 2.0. Hope you find them interesting! Free Bootstrap Website Template WemeetTemplate ToolsTemplate ThebarberTemplate 100 days of motion design - UX Collective 1. Driven by ideas Once I had an idea, I was driven to bring it to life. It did not matter what techniques I needed to learn. For example, I wanted to express my love for reading. SVG Tutorial - SVG Scalable Vector Graphics, SVG, is a W3C XML dialect to mark up graphics. It is partially implemented in Firefox, Opera, WebKit browsers, Internet Explorer and other browsers. This tutorial aims to explain the internals of SVG and is packed with technical details.

Icon Transition Generator How to use the exported icon? The downloaded icon is composed of visual elements (<g> elements), and a <script> tag that includes the JavaScript code for the animation. If you plan on including multiple two-state icons in your web project, then make sure to remove the <script> tag from the <svg> and include its content in your .js file so that you do not duplicate the javascript code (the content of the <script> tag has to be included only once and it is going to work for all your icons). Import and preview animated icons in Nucleo

6 Avengers: Infinity War LEGO Sets to Buy Avengers: Infinity War is, beyond a shadow of a doubt, the most highly anticipated movie of 2018. As the threat of intergalactic supervillain Thanos has loomed over the Marvel Cinematic Universe since 2012's The Avengers, the brewing conflict over the fate of the universe will finally come to a head on April 27. Fans are also ecstatic about the upcoming teamup between The Avengers and the Guardians of the Galaxy, who have been shut off from the rest of the MCU until now. These 6 LEGO sets inspired by Avengers: Infinity War not only allow fans to recreate scenes from the upcoming movie, but also include plot elements from the film as well! 1. The Outrider Dropship Attack