Nucleo Animated SVG Icons – Nucleo. Introducing 2 new icon categories: interactive icons and animated loops | nucleoapp.com There are micro animated patterns that are used over and over across different projects: for example, a hamburger menu icon that turns into a ❌ (close) icon on click.

You can create these animations in CSS or SVG, then save your snippets somewhere “safe” and use them when needed. However, wouldn’t it be cool to store these animations in a visual tool, where you can use tags to organize them and grab all the code you need in seconds? Wouldn’t it be even cooler if this application came with a built-in library of interactive icons? Enter Nucleo animated icons! One of our main goals is to speed up the workflow of our members. The Art Of SVG Filters And Why It Is Awesome.

Styling Text With SVG Filters. If you look at a US dollar bill up close, there are a lot of typographic niceties going on: the huge numbers in the corners, the beefy capitals across the top and bottom, and even the vibrant serial numbers on each half of the bill. 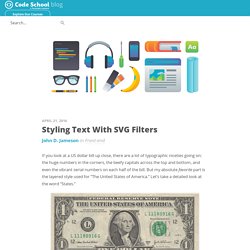 But my absolute favorite part is the layered style used for “The United States of America.” Let’s take a detailed look at the word “States.” See what I’m talking about? SVG Icons FTW. Despite the growing popularity of SVG, its time around and excellent browser support, we have a lack of good vector icon approaches.

It's time to fill this gap and use SVG as icons in our web projects. A lot of great methodologies and principles arose making our CSS more and more modular, structured and flexible. But think about your icons. Using raster graphics for icons means that they are not manageable in CSS. SVG Animation. It is possible to animate the shapes in an SVG image. 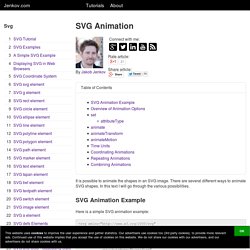 There are several different ways to animate SVG shapes. In this text I will go through the various possibilities. SVG Animation Example. Circular Progress Button with SVG. Previous Demo Back to the Codrops Article Default progress button (success and error) Elastic version, with some easings (success, error) If you enjoyed this demo you might also like: Progress Button Styles.

Building Better Interfaces with SVG by Sara Soueidan. US Open Sessions - Motion Demo. An Overview of SVG Sprite Creation Techniques. SVG can be used as an icon system to replace icon fonts. 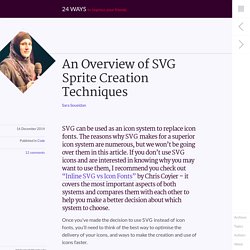 The reasons why SVG makes for a superior icon system are numerous, but we won’t be going over them in this article. If you don’t use SVG icons and are interested in knowing why you may want to use them, I recommend you check out “Inline SVG vs Icon Fonts” by Chris Coyier – it covers the most important aspects of both systems and compares them with each other to help you make a better decision about which system to choose. Once you’ve made the decision to use SVG instead of icon fonts, you’ll need to think of the best way to optimise the delivery of your icons, and ways to make the creation and use of icons faster. Just like bitmaps, we can create image sprites with SVG – they don’t look or work exactly alike, but the basic concept is pretty much the same. The ultimate guide to SVG. Imagine you could embed an image in a web page, scale that page to any size, and never lose image quality. 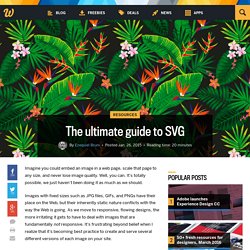 Well, you can. It’s totally possible, we just haven’t been doing it as much as we should. Images with fixed sizes such as JPG files, GIFs, and PNGs have their place on the Web, but their inherently static nature conflicts with the way the Web is going. As we move to responsive, flowing designs, the more irritating it gets to have to deal with images that are fundamentally not responsive. It’s frustrating beyond belief when I realize that it’s becoming best practice to create and serve several different versions of each image on your site. I realize that there are good, technical reasons for this. When I was first looking for the solution that lead me to the SVG, I didn’t know how much it would change how I make websites. They can be more difficult to acquire, because not every web designer is an illustrator. But as support for vector graphics grows online, so will their use. Karbon. Overview of SVG Animation in Web Design. Animated effects for the web have come a long way. 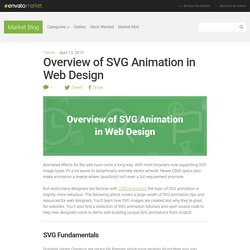 With most browsers now supporting SVG image types it’s a lot easier to dynamically animate vector artwork. Newer CSS3 specs also make animation a breeze where JavaScript isn’t even a full requirement anymore. But while many designers are familiar with CSS3 animation, the topic of SVG animation is slightly more nebulous. The following article covers a large swath of SVG animation tips and resources for web designers. Best of SVG 2014: Icons, Tools and Resources. With mobile devices taking over the world, so to speak, new technology for making websites and apps look pretty on mobile devices continues to emerge and evolve. 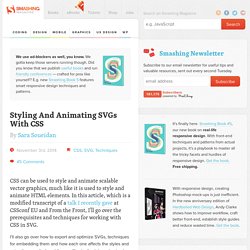 In this article, which is a modified transcript of a talk I recently gave1 at CSSconf EU and From the Front, I’ll go over the prerequisites and techniques for working with CSS in SVG. I’ll also go over how to export and optimize SVGs, techniques for embedding them and how each one affects the styles and animations applied, and then we’ll actually style and animate with CSS. Introduction Link. Animate SVG icons with CSS and Snap. How to optimize SVG code and animate an SVG icon using CSS and Snap.svg library. Browser support ie Chrome Firefox Safari Opera 9+ Working with SVG files is not an option anymore. With a huge amount of high definition devices out there, it’s not sustainable to export different sizes of the same bitmap assets and target specific device resolutions through CSS media queries. DeSVG. Tips For Optimising SVG Delivery For The Web. SVGs are a great asset in our responsive web design toolkit. But just like any other image format, there are certain steps you should take to make sure you’re delivering optimised resources that don’t have a negative impact on your page’s performance.

Here are some things that you can do to make sure you’re delivering better SVGs for the web. 1. Enable Gzip on your SVGs (if it’s not already enabled) SVGs are text-based, and thus gzip really well. When an SVG is gzipped, it is referred to as an “SVGZ” image and uses the corresponding .svgz filename extension. As a matter of fact, Appendix G of the SVG specification — that contains a list of features in SVG that promote small file sizes — contains a list of example compression rates resulting from gzipping a bunch of SVGs.

The following table shows a few examples from the tests available in the appendix: Animated SVG Icon. SVG Icons - Ready to use SVG Icons for the web. SVG Path Animation with jQuery and Illustrator. As technology in the web moves forward we are offered new tools to build amazing web applications. Scalable Vector Graphics or SVG’s have been gaining traction in the past year or so as most browsers handle the image file extension ‘.svg’. You can see the break down over at CanIUse.com. In this tutorial we will build a path animation using a super slick jQuery Plugin called Lazy Line Painter by Cam O’Connell. Cam is a London based front-end web developer with a passion for building interactive web applications and plugins.

Here is the Demo and Source files for what we will be building. For this exercise you will need a basic understanding of HTML, CSS and jQuery. Here is Our Step by Step Approach: Using SVG stroke Attributes. Using SVG inline provides total access to the graphic for complete customization and control over its output. This is especially handy when creating shapes by hand in the browser, or making edits to an existing graphic. There are a number of stroke related attributes within SVG that allow us to control the details of our strokes, just as we do in vector graphic software. Hopefully this quick post will serve as a general guide to getting started with these attributes and contribute to understanding their capabilities and potential. This can especially be handy when you start animating them, for example. To demonstrate the effects of these different attributes we will be taking a look at an image of some grapes. stroke The stroke attribute defines the "border" color of particular shapes and paths.

Vivus.js - svg animation. Animating Vectors with SVG. It is almost 2014 and fifteen years ago the W3C started to develop a web-based scalable vector graphics (SVG) format. As web technologies go, this one is pretty old and well entrenched. Embed not working on your device? Try direct. Iconmelon. Animate SVG icons with CSS and Snap. Structuring, Grouping, and Referencing in SVG – The <code><g></code>, <code><use></code>, <code><defs></code> and <code><symbol></code> Elements.

Snap.svg API Reference. Creates a gradient element gradient string gradient descriptor Gradient Descriptor The gradient descriptor is an expression formatted as follows: <type>(<coords>)<colors>. The <type> can be either linear or radial. The uppercase L or R letters indicate absolute coordinates offset from the SVG surface. Examples Linear gradient, relative from top-left corner to bottom-right corner, from black through red to white: var g = paper.gradient("l(0, 0, 1, 1)#000-#f00-#fff"); Linear gradient, absolute from (0, 0) to (100, 100), from black through red at 25% to white: var g = paper.gradient("L(0, 0, 100, 100)#000-#f00:25-#fff");

SVG Reference. Understanding SVG Coordinate Systems and Transformations (Part 2) — The <code>transform</code> Attribute. SVG elements can be transformed by scaling, translating, skewing, and rotating—much like HTML elements can be transformed using CSS Transforms. However, there are certain inevitable differences when it comes to the coordinate systems used and affected by these transformations. The Next Big Thing: Responsive Icons. Honestly, this topic sounded a little bit strange to me when I first learned about responsive iconography, as we have recently adapted icon fonts in order to make sure they scale well for various device. However, the idea of responsive icons it takes both responsive design and iconography a step further, much further.