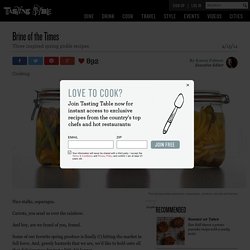 Carrots, you send us over the rainbow. And boy, are we frond of you, fennel. Some of our favorite spring produce is finally (!) Hitting the market in full force. Baked Avocado Fries. The Best Party Trick Ever: How to Make Thirty Minute Mozzarella. How To Preserve Radishes. Radishes aren’t really a vegetable that screams out for preservation. 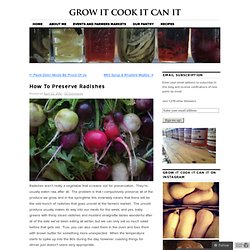 They’re usually eaten raw, after all. The problem is that I compulsively preserve all of the produce we grow, and in the springtime this invariably means that there will be the odd bunch of radishes that goes unsold at the farmers market. The unsold produce usually makes its way into our meals for the week, and yes, baby greens with thinly sliced radishes and mustard vinaigrette tastes wonderful after all of the kale we’ve been eating all winter, but we can only eat so much salad before that gets old. True, you can also roast them in the oven and toss them with brown butter for something more unexpected. When the temperature starts to spike up into the 80s during the day, however, roasting things for dinner just doesn’t seem very appropriate. Pickled Radishes. It always curious to me, when I see “French breakfast radishes” in the states. 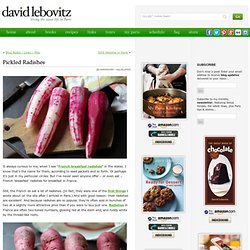 I know that’s the name for them, according to seed packets and so forth. Or perhaps it’s just in my particular circles. But I’ve never seen anyone offer – or even eat – French ‘breakfast’ radishes for breakfast in France. Still, the French do eat a lot of radishes. (In fact, they were one of the first things I wrote about on the site after I arrived in Paris.) French people also eat black radishes, which are soot-black, but when sliced opened, resemble daikon radishes with a crunchier taste. Pickled Radishes. Processing: Boiling Water Canner 15mins (half-pint, pint) Storage: 12 months+Yield: 6 cups Have an abundance of fresh radishes? 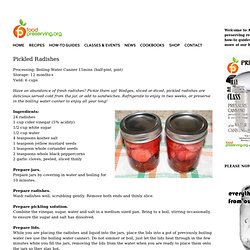 Pickle them up! Wedges, sliced or diced, pickled radishes are delicious served cold from the jar, or add to sandwiches. How to make {kick-butt} haloumi. Homemade Haloumi Cheese in an Hour. A super quick (microwave!) 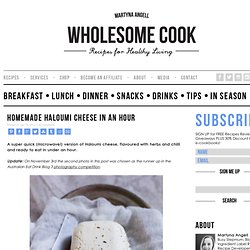 Version of Haloumi cheese, flavoured with herbs and chilli and ready to eat in under an hour. Update: On November 3rd the second photo in this post was chosen as the runner up in the Australian Eat Drink Blog 3 photography competition. Inspired by my recent adventures with 1 ingredient curd cheese making, I had decided to make haloumi. We love the salty flavour and squeaky texture of the cheese and often find ourselves munching on pan-fried slices of this Cypriot delicacy at snack-time. My first attempt over the weekend became a slight failure in that I used lemon juice (from 2 lemons) to help create the curd and so my cheese ended up more like a herbed curd cheese than haloumi. In a Pickle.

There is a restaurant in Mississippi that has the best fried catfish EVER! 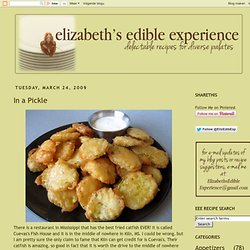 It is called Cuevas's Fish House and it is in the middle of nowhere in Kiln, MS. I could be wrong, but I am pretty sure the only claim to fame that Kiln can get credit for is Cuevas's. Their catfish is amazing, so good in fact that it is worth the drive to the middle of nowhere MS just to indulge. It is only about 30 minutes from my parents' home in Louisiana; so it isn't so unrealistic to suggest occasional trips to enjoy their golden fried fish.

Last time I was visiting home I convinced the family to have dinner there on Saturday night. There were several patrons of the Fish House that got their money's worth - I could look around and tell. **Editor's Notes: Cuevas's Fish House is in Picayune, MS - NOT Kiln. Fried Pickles Ingredients Dill Pickle Chips 3/4 to 1 cup of beer 2 eggs 1 -2 cups of flour Cholesterol free oil Directions. The Right Way to Clean, Cook and Eat Crawfish. The Lee Bros. Charleston Kitchen. In last week’s food column, Kelsey Winchester held forth about the power of Easter Ham. 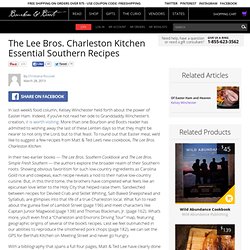 Indeed, if you’ve not read her ode to Granddaddy Winchester’s creation, it is worth visiting. More than one Bourbon and Boots reader has admitted to wishing away the last of these Lenten days so that they might be nearer to not only the Lord, but to that feast. To round out that Easter meal, we’d like to suggest a few recipes from Matt & Ted Lee’s new cookbook, The Lee Bros. Charleston Kitchen. Spinach Artichoke Balls Recipe. Sweet Potato Pierogies. OMG. Oh Bite It. Red Velvet Puppy Chow. The Story: Continuing on with both my Red Velvet mini-series and also my Puppy Chow binge…. 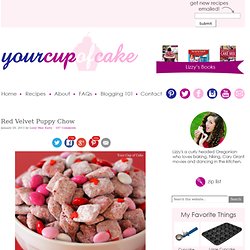 Now since I am allergic to all things Red Velvet (red dye doesn’t like me) I didn’t actually taste these. But I caught my roommate sneaking handfuls while I was taking photos and what was left was taken to some boys down the street who happily finished them off. So if you’re all cupcaked out or just wanting to try something new for the upcoming holiday, give these red munchies a shot!