Saw it coming — but Trump’s own party didn’t. Hanauer. Original photo by Michael Vadon (CC BY-SA) The Republican Party is coming apart, and Donald Trump is leading the charge. 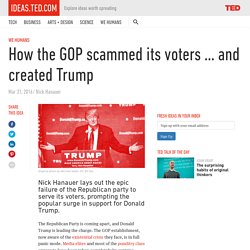 The GOP establishment, now aware of the existential crisis they face, is in full panic mode. Media elites and most of the punditry class appear to have been taken completely by surprise. Arianna Huffington: How to succeed? Get more sleep. Talks to watch when every conceivable bad thing has just happened to you. La leçon de bonheur d’Alain Badiou. Want to sound like a leader? Start by saying your name right.

Julian Treasure: 5 ways to listen better. Youtube. Linda Hill: How to manage for collective creativity. Rainer Strack: The workforce crisis of 2030. Jared Diamond: How societies can grow old better. David Kwong: Two nerdy obsessions meet. This infographic shows what it’s like to be a modern refugee. “Syrians are just looking for a quiet place where nobody hurts you,” says one refugee, who survived a capsized escape craft on his dangerous journey. 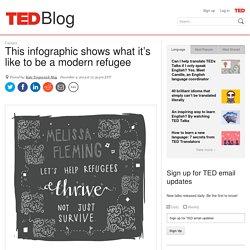 Clarice Holt, an illustrator in London, was moved by the simple, powerful truths she heard in Melissa Fleming’s TED Talk — and made these beautiful illustrations to show the personal stories and shattering data of the modern refugee crisis. “An illustration can be like Mary Poppins’ spoonful of sugar,” says Holt. “If someone is captivated by an image, they can absorb so many things along with it.” Holt began the sketch in pencil, then used a brush pen to draw the images. She cleaned it all up using a Wacom tablet and her laptop. Melissa Fleming saw the sketches on Twitter. As Holt says, “I hope it makes people want to go and give the gift of their talents, whatever those may be, to people who need them to rebuild their lives.

Fanfare shares art, music, video remixes and more created by TED fans around our content. Amber Case: We are all cyborgs now. Daniel Kish: How I use sonar to navigate the world. Sherry Turkle: Connected, but alone? Daniel Kish: How I use sonar to navigate the world. 5 talks full of weird facts about sex. TEDxISTEC" Video at TEDxTalks. Benedetta Berti: The surprising way groups like ISIS stay in power. Ed Yong: Zombie roaches and other parasite tales. Simon Sinek: How great leaders inspire action. The history of tattoos - Addison Anderson. Claim your independence. Success : TED Radio Hour. Talks to watch when you don't know what to do with your life. Should you stop eating fish? Oceanographer (and TED Prize winner) Sylvia Earle (TED Talk: My wish: Protect our oceans) has spent half a century campaigning to save the world’s seas. 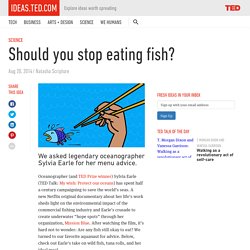 A new Netflix original documentary about her life’s work sheds light on the environmental impact of the commercial fishing industry and Earle’s crusade to create underwater “hope spots” through her organization, Mission Blue. After watching the film, it’s hard not to wonder: Are any fish still okay to eat? We turned to our favorite aquanaut for advice. Below, check out Earle’s take on wild fish, tuna rolls, and her ideal meal. To restore the ocean ecosystem, you’re saying we must put an end to overfishing and bottom trawling, which you liken to “catching songbirds with a bulldozer.” Paul Piff: Does money make you mean?

A brief history of melancholy - Courtney Stephens. Robert Burton attempted to gather the totality of human thinking on sadness and melancholy in his 1621 book The Anatomy of Melancholy. 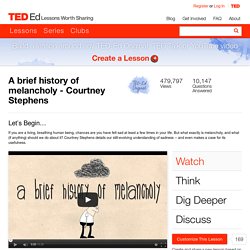 Similar to the approach in this video, Burton gathered widely in thinking about the subject. This includes quotes from thinkers and literature, anatomical drawings, and Burton’s own meditations. Check this page of quotes by Robert Burton for more insight into his thinking! Russell Foster: Why do we sleep? Simon Sinek: Why good leaders make you feel safe. Elizabeth Gilbert: Success, failure and the drive to keep creating. Math talks to blow your mind. Understanding world economics. The Money Paradox : TED Radio Hour. Slow down! Enjoy life. Yuval Noah Harari: What explains the rise of humans? John Green: The nerd's guide to learning everything online.

Luke Syson: How I learned to stop worrying and love "useless" art. Comment rebrancher son cerveau ? We ask 5 people creating the future: so, what it will be like? You could say we at TED live in a permanent tomorrowland, so at our recent TED2015 conference, Disney commissioned TED with filmmaker Jesse Dylan to shoot some attendees and speakers speaking about the future for a promo for the movie Tomorrowland. 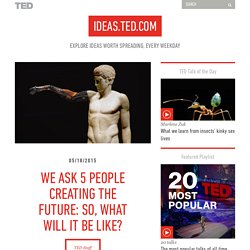 (Full disclosure, Disney is also an advertiser on ted.com.) But once the ad for the movie was cut together, we had some amazing leftovers — short interviews with people saying even more weird and interesting stuff about what they think the future will bring to their world (and ours). It was too good not to show. So here they are, insights from the likes of astronomer and planetary scientist Sara Seager, designer Tom Wujec and, first, science fiction writer Neil Gaiman: Pourquoi je ne crois pas à l'entreprise libérée. Plato’s Allegory of the Cave - Alex Gendler. Want to read the Allegory of the Cave in its complete format? 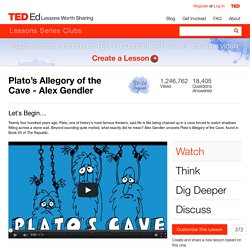 Go to this site and get started. To better understand the allegory’s larger context, try reading the rest of The Republic by Plato and these classic lectures. Then, check out this modern scientific interpretation of what it tells us about human knowledge. Want to see two different visual representations of this allegory? Finir un rêve inachevé. Own your face. A portrait of TEDxSouthBend speaker Robert Hoge “Most of us don’t own our faces. 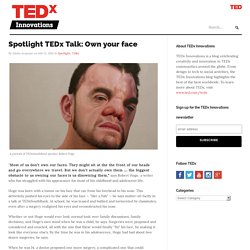 They might sit at the the front of our heads and go everywhere we travel. Why the Pope’s embrace of science matters. On June 18, Pope Francis issued the encyclical Laudato Si: On care for our common home. 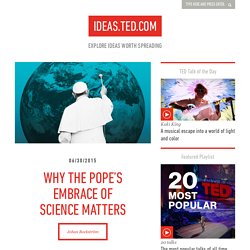 The letter has been widely praised for supporting the science on climate change. But it goes much further than many expected in documenting the phenomenal changes that our planet is undergoing, beyond climate. And the story of how the Pope has integrated science and religion (not always the easiest of companions, let’s face it) indicates, to me at least, a profound shift in world view. L'éloge de la lenteur. Vous avez une réunion ? Allez vous promener ! D'où viens-tu? Le pouvoir des introvertis. Fellow Aomawa Shields looks for life on other planets. Aomawa Shields is an astrobiologist who studies the potential for life on other planets. 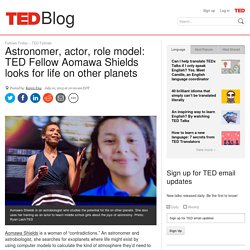 She also uses her training as an actor to teach middle school girls about the joys of astronomy. Photo: Ryan Lash/TED Aomawa Shields is a woman of “contradictions.” An astronomer and astrobiologist, she searches for exoplanets where life might exist by using computer models to calculate the kind of atmosphere they’d need to support it.

And she’s also a classically trained actor, who — through her organization Rising Stargirls — teaches astronomy to middle school girls of color using theater, writing and visual art to spark their imaginations. She talks to the TED Blog about how the threads of her life — scientist, actor, role model and educator — weave together into a unique whole. Talks to restore your faith in humanity. What really happens to the plastic you throw away - Emma Bryce. If you watched this video, you’re probably interested in how plastics are made, and what impact they have on the environment. 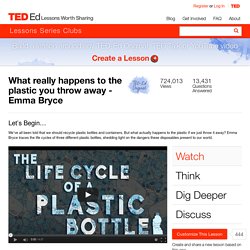 For starters, you might want to watch this video that shows you how plastic bottles are produced. The American Chemistry Council also has some helpful guidelines on how the material is manufactured, what different types there are, and what role monomers and polymers play in the manufacturing process. Martin Rees: Can we prevent the end of the world? The language of lying - Noah Zandan. AJ Jacobs: The world's largest family reunion … we're all invited! The evolution of the human eye - Joshua Harvey. Bill T. Jones: The dancer, the singer, the cellist ... and a moment of creative magic. L’ambition féminine. 10 tips for better slide decks. When your slides rock, your whole presentation pops to life. At TED2014, David Epstein created a clean, informative slide deck to support his talk on the changing bodies of athletes. Photo: James Duncan Davidson/TED Aaron Weyenberg is the master of slide decks.

Our UX Lead creates Keynote presentations that are both slick and charming—the kind that pull you in and keep you captivated, but in an understated way that helps you focus on what’s actually being said. The Moneyball Effect: How smart data is transforming criminal justice and more. Anne Milgram reveals what happened when New Jersey moneyballed its criminal justice system. Photo: Marla Aufmuth When Anne Milgram became the Attorney General of New Jersey in 2007, she was stunned to find out just how little data was available on who was being arrested, who was being charged, who was serving time in jails and prisons, and who was being released.

Anne Milgram: Why smart statistics are the key to fighting crime “It turns out that most big criminal justice agencies like my own didn’t track the things that matter,” she says in today’s talk, filmed at TED@BCG. “We didn’t share data, or use analytics, to make better decisions and reduce crime.” Andrew McAfee: What will future jobs look like? Gayle Tzemach Lemmon: Women entrepreneurs, example not exception. 10 tips for better slide decks. David Bolinsky: Visualizing the wonder of a living cell. Amber Case: We are all cyborgs now. The 2,400-year search for the atom - Theresa Doud. Ernest Rutherford Although Ernest Rutherford is well known for his discovery of the nucleus, he did a lot of other research and experiments into topics other than the atom. He started his career studying electricity and magnetism and it wasn’t until he left his home of New Zealand and moved to Cambridge, England that he started working with the atom.

Working under J.J. Thomson at Cambridge University, Rutherford investigated electrical conduction in gases using X-rays. When radioactive atoms were discovered in the late 1890s, he switched his experiment to use radioactivity instead of X-rays to initiate electrical conduction in his gases. In 1911 after returning to England, Rutherford conducted his most famous experiment with alpha particles and gold foil which lead to his discovery of the nucleus. Ed and Periodic Videos. Nos vies valent plus que leurs profits: Bruno Tesson at TEDxPantheonSorbonne. Vincent Cochetel: I was held hostage for 317 days. Here's what I thought about… Isaac Getz : Libérer l'entreprise. The funniest TED Talks. Now playing The New Yorker receives around 1,000 cartoons each week; it only publishes about 17 of them. In this hilarious, fast-paced, and insightful talk, the magazine's longstanding cartoon editor and self-proclaimed "humor analyst" Bob Mankoff dissects the comedy within just some of the "idea drawings" featured in the magazine, explaining what works, what doesn't, and why.

How much sleep a person needs changes as one ages. A new mother needs seven hours of sleep per night, but her newborn baby needs 12-18 hours of sleep per night. Why do we cry? The three types of tears - Alex Gendler. IDF In TedMed - IDF Leadership And Saving Lives. Diana Nyad: Never, ever give up. Daniel Goldstein: The battle between your present and future self. John Wooden: The difference between winning and succeeding. Frans de Waal: Moral behavior in animals. Juan Enriquez: The next species of human. Ariel Garten: Know thyself, with a brain scanner. George Dyson: The birth of the computer. Le cerveau, créateur de temps.