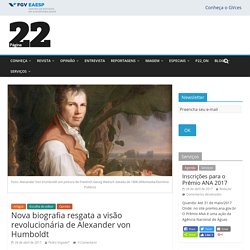 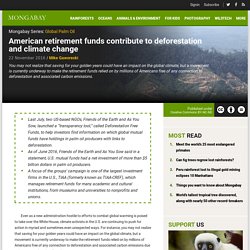 For instance, you may not realize that saving for your golden years could have an impact on the global climate, but a movement is currently underway to make the retirement funds relied on by millions of Americans free of any connection to deforestation and associated carbon emissions due to investments in palm oil producers. Responding to the election of Donald Trump as U.S. president and what that might mean for global efforts to combat climate change, Katherine Hayhoe, an atmospheric scientist and associate professor of political science at Texas Tech University, said in a statement that “The bright light of hope the Paris Agreement shone on the bleak and discouraging landscape of climate change has been dimmed but not extinguished.” Related Posts.

The Department of Justice Must Investigate ExxonMobil. You can join the call to action be signing our petition to the DOJ here. 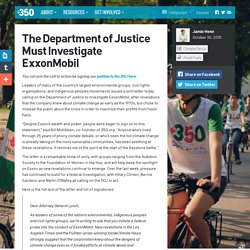 Leaders of many of the country’s largest environmental groups, civil rights organizations, and indigenous peoples movements issued a joint letter today calling on the Department of Justice to investigate ExxonMobil, after revelations that the company knew about climate change as early as the 1970s, but chose to mislead the public about the crisis in order to maximize their profits from fossil fuels. Seething With Anger, Probe Demanded into Exxon's Unparalleled Climate Crime. A broad coalition of community groups along with prominent leaders from the nation's top civil rights, environmental, and indigeneous people's movements on Friday sent a joint letter to the U.S. 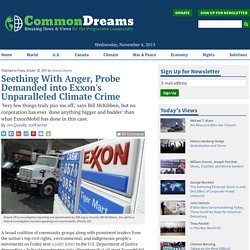 Department of Justice demanding a federal investigation into allegations that oil giant ExxonMobil knew about the role fossil fuels played in driving climate change since the 1970s but concealed that information—and later sought to discredit those issuing warnings—in order to protect its own financial interests.

"Anyone who’s lived through 25 years of phony climate debate, or who’s seen the toll climate change is already taking on the most vulnerable communities, has been seething at these revelations. " "Given the damage that has already occurred from climate change—particularly in the poorest communities of our nation and our planet—and that will certainly occur going forward, these revelations should be viewed with the utmost apprehension," the letter states.

Just over two weeks ago, U.S. Climate Change Is Here - National Geographic Magazine. The 5 psychological barriers to climate action. What we think about when we try not to think about global warming, and what to do about it. It's all too easy to distance and doubt ourselves away from climate facts. Particularly since they are sometimes presented in abstract, doom-laden, fear-mongering, guilt-inducing, and polarizing ways. 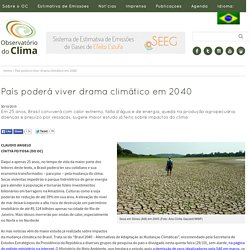 Amazon Rainforest Defense Now Part of Activists' Global Strategy to Defeat Fossil Fuel Industry  Construction of an oil pipeline in the Ecuadorian Amazon by Arco-Oriente that carries 80,000 barrels of crude oil from the Villano oil reserve to the TransEcuadorian pipeline. 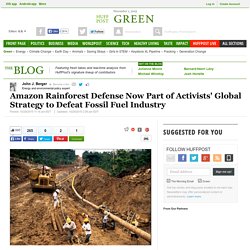 Pipeline ruptures in Ecuador have discharged over 18 million gallons of oil--more than the 10.8 million gallon Exxon Valdez spill. Photo (c) Bruce Farnsworth. The fate of the world's climate and the Amazon Rainforest are intertwined. That was the message brought by Amazon Watch founder and board president Atossa Soltani to a session of the annual Bioneers Conference in San Rafael, CA on October 23rd. She shared the stage with Sierra Club Executive Director Michael Brune in a panel on disrupting the global carbon economy so as to protect the climate, indigenous people, and the environment. Global warming could be more devastating for the economy than we thought. Posted on 27 October 2015 by dana1981 A new study published in Nature by scientists at Stanford and UC Berkeley has made waves for its finding that thus far we have dramatically underestimated the damage human-caused climate change will do to the global economy. 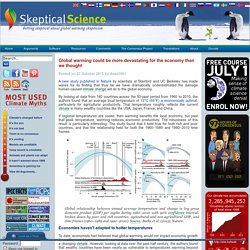 By looking at data from 160 countries across the 50-year period from 1960 to 2010, the authors found that an average local temperature of 13°C (55°F) is economically optimal, particularly for agricultural productivity. That temperature roughly reflects the current climate in many wealthy countries like the USA, Japan, France, and China. If regional temperatures are cooler, then warming benefits the local economy, but past that peak temperature, warming reduces economic productivity. Policy: Climate advisers must maintain integrity. Illustration by Phil Disley Disenchantment has set in well ahead of the 21st Conference of the Parties (COP21) to the United Nations Framework Convention on Climate Change (UNFCCC) in Paris in December. 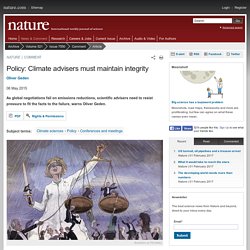 Scientists, policy-makers and the public already accept that progress will not be enough to keep global average temperature rise within the 2 °C limit set at the 2010 UN climate summit. The negotiations' goal has become what is politically possible, not what is environmentally desirable. Gone is a focus on establishing a global, 'top down' target for stabilizing emissions or a carbon budget that is legally binding. The Paris meeting will focus on voluntary, 'bottom up' commitments by individual states to reduce emissions. The global climate target is being watered down in the hope of getting any agreement in Paris. A shift in climate. Hoesung Lee has laid out a vision for his tenure as the fourth chair of the Intergovernmental Panel on Climate Change (IPCC). 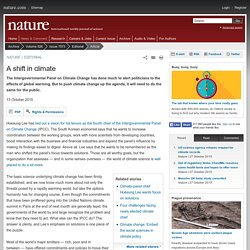 The South Korean economist says that he wants to increase coordination between the working groups, work with more scientists from developing countries, boost interaction with the business and financial industries and expand the panel’s influence by making its findings easier to digest. Policy: Climate advisers must maintain integrity. Climate change: Embed the social sciences in climate policy. Illustration by David Parkins The Intergovernmental Panel on Climate Change (IPCC) is becoming irrelevant to climate policy. 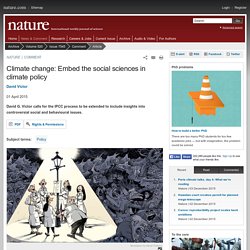 Climate policy: Democracy is not an inconvenience. Illustration by David Parkins There are many threats to democracy in the modern era. Not least is the risk posed by the widespread public feeling that politicians are not listening. Such discontent can be seen in the political far right: the Tea Party movement in the United States, the UK Independence Party, the Pegida (Patriotic Europeans Against the Islamization of the West) demonstrators in Germany, and the National Front in France. Extreme heatwaves could push Gulf climate beyond human endurance, study shows. The Gulf in the Middle East, the heartland of the global oil industry, will suffer heatwaves beyond the limit of human survival if climate change is unchecked, according to a new scientific study.

Plants Communicate Using An Internet of Fungi. Hidden beneath the surface and entangled in the roots of Earth’s astonishing and diverse plant life, there exists a biological superhighway linking together the members of the plant kingdom in what researchers call the “wood wide web”. This organic network operates much like our internet, allowing plants to communicate, bestow nutrition, or even harm one another. The network is comprised of thin threads of fungus known as mycelium that grow outwards underground up to a few meters from its partnering plant, meaning that all of the plant life within a region is likely tapped into the network and connected to one another.

The partnership of the roots of plants and the fungi is known as mycorrhiza and is beneficial for both parties involved; plants provide carbohydrates to the fungi and in exchange, the fungi aids in gathering water and providing nutrients such as phosphorus and nitrogen to its partnering plant. “Branching threads of fungus mycelium in organic soil” Stanford researchers' calculations reveal high global economic cost of climate change.

A study co-authored by Stanford and UC Berkeley researchers indicates that the global economy will take a big hit from climate change, with rich countries affected as well as poor. (Michael Bischof) Stanford Report, October 21, 2015 Stanford-Cal collaboration finds that without climate change mitigation, even wealthy countries will see an economic downturn by 2100. By Laura Seaman. Moral case to tackle climate change overwhelming, says Lord Stern. Failing to act on the grave threat posed by climate change devalues the lives of future generations and amounts to unacceptable “discrimination by date of birth”, according to the influential economist Lord Stern. Speaking at an international meeting in Rome on environmental justice and climate change attended by senior Vatican officials, Stern said that the “moral arguments” for action to combat climate change were overwhelming.

“Discounting future welfare or lives means weighting the welfare of lives of future people lower than lives now, irrespective of consumption and income levels, purely because their lives lie in the future,” he said. “This is discrimination by date of birth, and is unacceptable when viewed alongside notions of rights and justice.” Next generation of leaders need to understand climate change, says Lord Stern. Everything you need to know about the Paris climate summit and UN talks. What is happening in Paris this December? The governments of more than 190 nations will gather in Paris to discuss a possible new global agreement on climate change, aimed at reducing global greenhouse gas emissions and thus avoiding the threat of dangerous climate change.

Climate scientist hits out at IPCC projections. Is Capturing Carbon from the Air Practical? Physicist Peter Eisenberger had expected colleagues to react to his idea with skepticism. New Method Removes Carbon from the Air, Churns Out Valuable Carbon Products. A new method for taking carbon dioxide directly from the air and converting it to oxygen and nanoscale fibers made of carbon could lead to an inexpensive way to make a valuable building material—and may even serve as a weapon against climate change. Carbon fibers are increasingly being used as a structural material on the aerospace, automotive, and other industries, which value its strength and light weight. The useful attributes of carbon fibers, which also include electrical conductivity, are enhanced at the nanoscale, says Stuart Licht, a professor of chemistry at George Washington University.

Page 2 of The Point of No Return: Climate Change Nightmares Are Already Here. Your brief to the Paris UN climate talks: how we got here and what to watch for. Index. The ‘Family of 5’ Primary Forests: A Snapshot of What Remains. Gmail. How Climate Scientists Feel About Climate Change Deniers - Jason Box Tweet Controversy.