Transforming your workplace environment. Office Evolution- The New Age of 'Coworking' Spaces. The Office Reboot Worksheet. The Office Reboot. FRAMAPAD BTS NOT2. Partiel NOT 2019 2020 Rattrapage The Millennial Expectation of Technology in the Workplace. How to protect inheritances for future generations. There are many "what ifs" to consider when giving an inheritance. 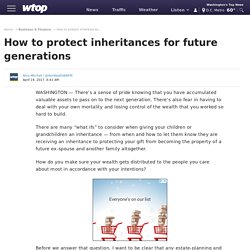 Before we answer that question, I want to be clear that any estate-planning and legal documents should be properly discussed and drafted by an estate attorney. Making a French Will in France. Property Ownership Options Juridical Options Financial Planning Options 4.6.1. 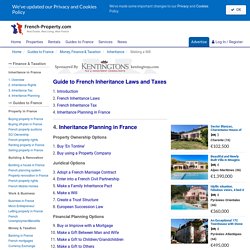 Wills and French Law If you are resident in France, in the absence of a will or other inheritance planning measures being taken, the rules of an intestate inheritance apply. Full adoption. Adoption system 'out of step with reality' in age of social media, review finds. Conditions for adoption in France. Jointly: Spouses married for more than two years, not separated from body, whether of the same sex or of different sex. 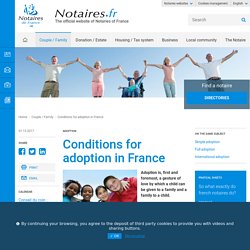 They must both be at least 28 years old, unless they have been married for more than two years. However, partners in a civil partnership and unmarried couples may not adopt jointly (only one of the partners or one of the members of the couple can be an adoptive parent).Individuals: any person (whether a man or a woman) aged at least 28. However, if the person is married, they must have the agreement of their spouse. In principle, the adopter or adopters must be at least 15 years older than the child they wish to adopt, however, the judge may allow exceptions if the age gap is smaller.It should be noted that in the special case of the adoption of a spouse's child, the adopter does not have to meet the age condition. 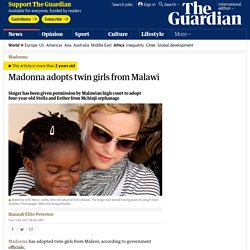 The singer, who had previously denied she was visiting the country with a view to adopting more children, was given permission by the Malawian high court on Tuesday to adopt the four-year-olds Stella and Esther. Mlenga Mvula, a judicial spokesman, said: “I can confirm that Madonna has been granted an adoption order for two children.” Madonna has previously adopted two children from Malawi, David Banda in 2006 and Mercy James in 2009. The twins are being adopted from the Home of Hope orphanage in Mchinji, near the western border with Zambia, where David Banda once lived. Facebook risk for children who are adopted. Social networking websites such as Facebook can pose a serious risk to adopted children who can be easily tracked down by birth relatives they may not be ready to meet, a charity has warned. 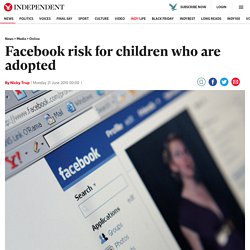 While there are no precise figures on the number of children who have been contacted in this way, David Holmes, chief executive of the British Association for Adoption & Fostering (BAAF), says the phenomenon is a growing concern. "It's not just Facebook, it's the whole phenomenon of social networking and social media. There is a very positive side to it, because it's a way of keeping in contact with lots of people very easily...

But equally, by having lots of friends and posting identifying information online, that information could be misused in the wrong hands," he told The Independent. Download the new Indpendent Premium app. Jeff Bezos' divorce highlights usefulness of prenuptial agreements. Even if you don’t fancy yourself the next Jeff Bezos, it can be worth thinking about your current assets and potential for future wealth before you get married. 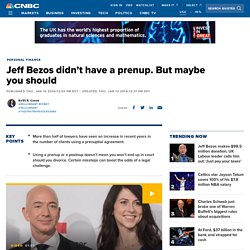 Amazon’s billionaire CEO and his wife, MacKenzie, announced Wednesday via a tweet that they intend to divorce. TMZ reported Thursday that the couple did not have a prenuptial agreement, and it’s unclear whether they had a postnuptial agreement. Experts say the distinction could be costly for the world’s wealthiest man, whose fortune is estimated at $136 billion. Prenups and postnups set out rights to property and responsibilities for a couple in the event of a death or divorce, said Michael Stutman, a founding partner of Stutman Stutman & Lichtenstein in New York. Prenups are agreements made before a marriage; postnups, after. Heterosexual couples may be allowed to convert marriages to civil unions. All heterosexual couples in England and Wales will be offered the chance to “convert” their marriages to civil partnerships, or vice versa, under plans being considered by ministers.