Gillian Craig, who was part of the Learning Time with Shaun and Timmy writing team, explains. As teachers and parents, we follow certain principles in our roles. Often though, these principles overlap and all we need to do is recognise and reinforce these areas. Ask (the right) questions When my daughter came out of her class one day shortly after her course started, I asked her, 'What did you do in class today?

'. Although my daughter is only two years old, (and more experienced parents than me would not have asked such a broad question to start with), questioning our children at any age about what they have done in class is a natural thing to do. Similarly, a child’s artwork can provide a prompt for asking questions: 'What (or who) is it? ' Teachers also want their students to reflect on their lessons, but with young children especially, this is a learned skill. Reinforce desirable behaviour. Listening Skills for Staff.

A longitudinal investigation of the role of quantity and quality of child-directed speech in vocabulary development. The Power (and Peril) of Praising Your Kids. What do we make of a boy like Thomas? 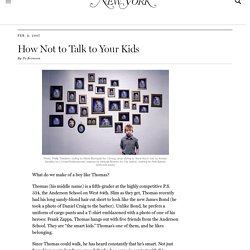 Thomas (his middle name) is a fifth-grader at the highly competitive P.S. 334, the Anderson School on West 84th. Slim as they get, Thomas recently had his long sandy-blond hair cut short to look like the new James Bond (he took a photo of Daniel Craig to the barber). Unlike Bond, he prefers a uniform of cargo pants and a T-shirt emblazoned with a photo of one of his heroes: Frank Zappa. Thomas hangs out with five friends from the Anderson School. They are “the smart kids.” Since Thomas could walk, he has heard constantly that he’s smart. But as Thomas has progressed through school, this self-awareness that he’s smart hasn’t always translated into fearless confidence when attacking his schoolwork. For instance, in the early grades, Thomas wasn’t very good at spelling, so he simply demurred from spelling out loud. Thomas is not alone. When parents praise their children’s intelligence, they believe they are providing the solution to this problem.

Deconstructing Role Play – Provide the Resources, Step Back and Watch Children’s Learning Flourish. Hospital, vet’s surgery, post office, travel agent – themed role play areas are often seen as a must for an early years setting. They are often meticulously prepared to be aesthetically pleasing, covered in laminated words and pictures with the aim of enticing children in. But this is where I encountered a problem: in these areas, children are expected to come together to play out adult scenarios that are consistent with these themes. Yet how many children have visited a travel agent to book a holiday recently, or operated on a pet dog in a vet’s surgery?

For the majority of children, themed areas such as those described above are simply too alien for high-quality cooperative play to develop – which is why I found the children in my class would revert back to playing ‘mums and dads’ by mid-morning, rather than booking a holiday to Costa Rica, as the poster on the wall in the travel agent suggested! I decided action had to be taken; it was time to improve my role play corner. The benefits. Symbolic play and language development. 1. Introduction 1.1. Primary school shake-up to focus on ‘play-led’ learning. Children at primary schools would not study traditional subjects until as late as 10 years of age, under proposals being considered by policymakers. Instead, there would be a much greater emphasis on creative play during the early years of primary school, and broader areas of learning in later years.

The reforms are based loosely on some of the features of top-performing education systems in countries such as Finland, as well as new research on how children learn. The proposals, drafted by the National Council for Curriculum and Assessment (NCCA), represent some of the biggest proposed changes to teaching and learning at primary level in more than two decades. The cognitive benefits of play: Effects on the learning brain. © 2008 - 2014, Gwen Dewar, Ph.D., all rights reserved Science supports many of our intuitions about the benefits of play. Playful behavior appears to have positive effects on the brain and on a child’s ability to learn. In fact, play may function as an important, if not crucial, mode for learning.

Want specifics? Here are some examples. Animal experiments: Play improves memory and stimulates the growth of the cerebral cortex In 1964, Marion Diamond and her colleagues published an exciting paper about brain growth in rats. Low-cost play ideas: video. Why Movement is Essential in Early Childhood. With so few years under their belts, my 3- and 6-year-old daughters are still learning to inhabit their bodies. They are learning how to maneuver themselves physically, how to orient themselves in space. As Vanessa Durand, a pediatrician at St. Play to Learn: Discussion.

Play to Learn. 5 ways to win over parents to the importance of play in international EYFS. "I’m not sending my child to school for them play all day. 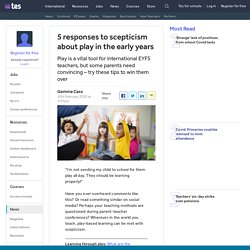 They should be learning properly! " Have you ever overheard comments like this? Or read something similar on social media? Perhaps your teaching methods are questioned during parent-teacher conferences? Convention on the Rights of the Child. Arabic | Chinese | French | Russian | Spanish Text in PDF Format Adopted and opened for signature, ratification and accession by General Assembly resolution 44/25 of 20 November 1989 entry into force 2 September 1990, in accordance with article 49 Preamble The States Parties to the present Convention,

Taking Playtime Seriously. So part of encouraging play is pulling back on how much programmed goal-directed learning we expect from very young children, to leave them time for the fun of exploration, curiosity and, well, fun. But another important part may be creating environments that foster children’s play and parents’ participation and attention. Dr. Hirsh-Pasek, who is a senior fellow at the Brookings Institution, cited its Learning Landscapes Initiative, which aims to set up learning opportunities in public places where people will encounter them.

David whitebread importance of play report. Importance of play for babies & children. Australian Government Department of Education and Training (2009). Belonging, being and becoming: The early years learning framework for Australia. Canberra: Commonwealth of Australia. Retrieved 19 June 2019 from Cole-Hamilton, I. (2011). Resources. How young children learn English through play. As we release Learning Time with Timmy – our first app for early-years learners of English – Danitza Villarroel, a teacher on our Learning Time with Shaun and Timmy course in Chile, explains the importance of learning through play, and offers a few tips for teachers new to this age group.

Teaching English to pre-school children can be daunting for teachers new to this age group. Young children have shorter attention spans than older children and adults, and they're still learning their mother tongue. But teaching these learners can be enormously rewarding once you've taken a few basic principles on board. ZERO TO THREE. 6 Types of Play: How Children's Play Becomes More Social. Play is a serious business. The pioneering developmental psychologist Lev Vygotsky thought that, in the preschool years, play is the leading source of development. Getting the right balance between adult-led and child-initiated learning.

As an early years practitioner you will know the importance of creating the right balance between adult-led and child-initiated learning. Help all children learn and develop with this guide. Heuristic play. Heuristic play is rooted in young children’s natural curiosity. 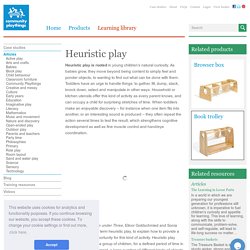 As babies grow, they move beyond being content to simply feel and ponder objects, to wanting to find out what can be done with them. Toddlers have an urge to handle things: to gather, fill, dump, stack, knock down, select and manipulate in other ways. Household or kitchen utensils offer this kind of activity as every parent knows, and can occupy a child for surprising stretches of time.

When toddlers make an enjoyable discovery – for instance when one item fits into another, or an interesting sound is produced – they often repeat the action several times to test the result, which strengthens cognitive development as well as fine muscle control and hand/eye coordination. What Parents Can Gain From Learning the Science of Talking to Kids.

There was a direct correlation between the children who’d heard a lot of parent talk and how prepared they were to learn once they arrived at school. 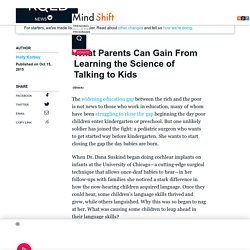 Hart and Risley wrote, “With few exceptions, the more parents talked to their children, the faster the children’s vocabularies [grew] and the higher the children’s IQ test scores at age 3 and later.” For Suskind, a lightbulb went on. “The truth is, much of what you see in children born into poverty is analogous to children born deaf,” Suskind said. “It’s a really important point. How young children learn English as another language. Play to Learn: Discussion.

Related:  English in Early Childhood - FutureLearn   -  English in early childhood   -  Early Childhood Development   -  English teaching early years   -  English in early childhood   -  Young Learners. How they learn   -  FutureLearn_EnglishInEarlyChildhood   -  BrC learn kids   -  ESL British council Yearly childhood   -  Teaching English   -  English in Early Childhood   -  Learning through play   -  (151) The power of yet   -  NQS_PLP_E-Newsletter_No43.pdf   -  Carol Dweck: The power of believing that you can improve   -  How can parents and teachers best educate young children?   -  Listening Skills for Staff   -  A longitudinal investigation of the role of quantity and quality of child-directed speech in vocabulary development   -  The Power (and Peril) of Praising Your Kids   -  Deconstructing Role Play – Provide the Resources, Step Back and Watch Children’s Learning Flourish   -  Symbolic play and language development   -  Primary school shake-up to focus on ‘play-led’ learning   -  The cognitive benefits of play: Effects on the learning brain   -  Low-cost play ideas: video   -  Why Movement is Essential in Early Childhood   -  Play to Learn: Discussion   -  Play to Learn   -  5 ways to win over parents to the importance of play in international EYFS   -  Convention on the Rights of the Child   -  Taking Playtime Seriously   -  Importance of play for babies & children   -  How young children learn English through play   -  ZERO TO THREE   -  6 Types of Play: How Children's Play Becomes More Social   -  Getting the right balance between adult-led and child-initiated learning   -  Heuristic play   -  What Parents Can Gain From Learning the Science of Talking to Kids   -  Education   -  Enterprise