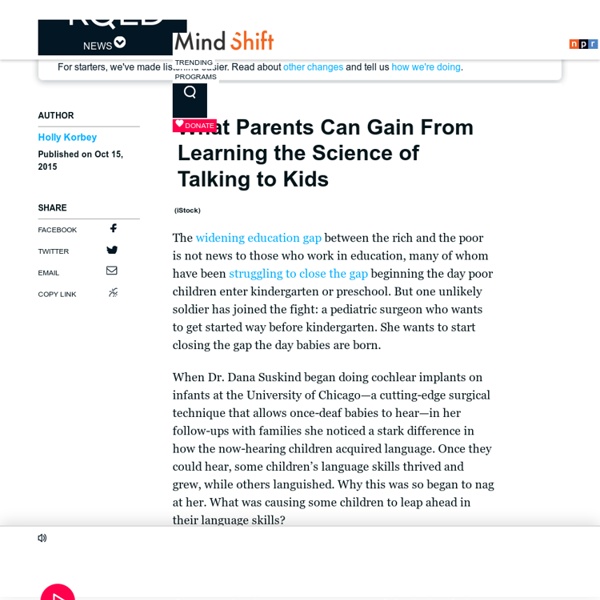 There was a direct correlation between the children who’d heard a lot of parent talk and how prepared they were to learn once they arrived at school. Hart and Risley wrote, “With few exceptions, the more parents talked to their children, the faster the children’s vocabularies [grew] and the higher the children’s IQ test scores at age 3 and later.” For Suskind, a lightbulb went on. “The truth is, much of what you see in children born into poverty is analogous to children born deaf,” Suskind said. “It’s a really important point. The most fundamental science shows that it’s really language, and all that comes with it, the brain-building aspect of things, that makes a difference.” Bringing Parents On Board In Suskind’s new book, "Thirty Million Words," she explains the research behind the word gap in detail, along with her research-based initiative of the same name, aimed at boosting children’s brains in the first three years of their lives. * Tune In. * Talk More. * Take Turns.

How young children learn English as another language By Opal Dunn, educational consultant and author Introduction Young children are natural language acquirers; they are self-motivated to pick up language without conscious learning, unlike adolescents and adults. They have the ability to imitate pronunciation and work out the rules for themselves. Any idea that learning to talk in English is difficult does not occur to them unless it’s suggested by adults, who themselves probably learned English academically at a later age through grammar-based text books. Read the notes below about young children learning English as another language.

Multilingual Preschoolers It’s amazing how young children learn to converse with others. They have to not only internalize grammar and vocabulary, but also develop an understanding of culture: how to take turns in a conversation, who to talk to, and how to narrate a story. For dual language learners (DLLs) — children under the age of 5 with a home language other than English — that process can be complex. Heuristic play Heuristic play is rooted in young children’s natural curiosity. As babies grow, they move beyond being content to simply feel and ponder objects, to wanting to find out what can be done with them. Toddlers have an urge to handle things: to gather, fill, dump, stack, knock down, select and manipulate in other ways. Household or kitchen utensils offer this kind of activity as every parent knows, and can occupy a child for surprising stretches of time. When toddlers make an enjoyable discovery – for instance when one item fits into another, or an interesting sound is produced – they often repeat the action several times to test the result, which strengthens cognitive development as well as fine muscle control and hand/eye coordination. In their book, People under Three, Elinor Goldschmied and Sonia Jackson coined the term heuristic play, to explain how to provide a more structured opportunity for this kind of activity.

Why Movement is Essential in Early Childhood With so few years under their belts, my 3- and 6-year-old daughters are still learning to inhabit their bodies. They are learning how to maneuver themselves physically, how to orient themselves in space. As Vanessa Durand, a pediatrician at St. Christopher’s Hospital for Children in Philadelphia, says, freedom of movement is necessary for children to meet their developmental milestones: “Children learn by experiencing their world using all of their senses. The restriction of movement, especially at a young age, impedes the experiential learning process.” Movement allows children to connect concepts to action and to learn through trial and error.

Convention on the Rights of the Child Arabic | Chinese | French | Russian | Spanish Text in PDF Format Adopted and opened for signature, ratification and accession by General Assembly resolution 44/25 of 20 November 1989 entry into force 2 September 1990, in accordance with article 49 Preamble The States Parties to the present Convention, Considering that, in accordance with the principles proclaimed in the Charter of the United Nations, recognition of the inherent dignity and of the equal and inalienable rights of all members of the human family is the foundation of freedom, justice and peace in the world,

Why does my toddler love repetition? Paediatric speech and language therapist It may test your patience when your toddler demands 'Row, row, row your boat' for the 10th time. But there's a good reason for her insistence. The cognitive benefits of play: Effects on the learning brain © 2008 - 2014, Gwen Dewar, Ph.D., all rights reserved Science supports many of our intuitions about the benefits of play. Playful behavior appears to have positive effects on the brain and on a child’s ability to learn. In fact, play may function as an important, if not crucial, mode for learning. Want specifics? Here are some examples.