Teachers TV- Play to Learn. Pedagogy of Play. Play is central to how children learn: the way they make sense of their world; the way they form and explore friendships; the way they shape and test hypotheses about their intellectual, social, emotional, and physical environments. 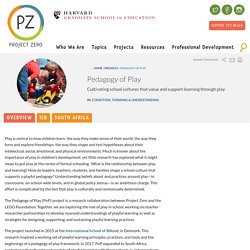 Much is known about the importance of play in children’s development, yet little research has explored what it might mean to put play at the center of formal schooling. What is the relationship between play and learning? How do leaders, teachers, students, and families shape a school culture that supports a playful pedagogy? Understanding beliefs about and practices around play—in classrooms, on school-wide levels, and in global policy arenas—is an ambitious charge.

This effort is complicated by the fact that play is culturally and contextually determined. The Pedagogy of Play (PoP) project is a research collaboration between Project Zero and the LEGO Foundation. The project launched in 2015 at the International School of Billund, in Denmark. Play and learning 1. Plays potential in early literacy development. Why play based learning.

Password protected padlet. David whitebread importance of play report. ZERO TO THREE. How young children learn English through play. As we release Learning Time with Timmy – our first app for early-years learners of English – Danitza Villarroel, a teacher on our Learning Time with Shaun and Timmy course in Chile, explains the importance of learning through play, and offers a few tips for teachers new to this age group. Teaching English to pre-school children can be daunting for teachers new to this age group. Young children have shorter attention spans than older children and adults, and they're still learning their mother tongue. But teaching these learners can be enormously rewarding once you've taken a few basic principles on board. The importance of active learning Active learning means fully involving children in the learning process.

Promoting learning through play Play is a very significant part of what life means to children at this stage of their development. Encouraging children's creativity and imagination It's important that we help young learners develop beyond mere language abilities. Importance of play for babies & children. Australian Government Department of Education and Training (2009). Belonging, being and becoming: The early years learning framework for Australia. Canberra: Commonwealth of Australia. Retrieved 19 June 2019 from Cole-Hamilton, I. (2011). Getting it right for play: The power of play: An evidence base. Fleer, M. (2013). Ginsburg, K.A. (2007). Lester, S., & Russell, W. (2010). Taking Playtime Seriously. So part of encouraging play is pulling back on how much programmed goal-directed learning we expect from very young children, to leave them time for the fun of exploration, curiosity and, well, fun.

But another important part may be creating environments that foster children’s play and parents’ participation and attention. Dr. Hirsh-Pasek, who is a senior fellow at the Brookings Institution, cited its Learning Landscapes Initiative, which aims to set up learning opportunities in public places where people will encounter them. One of these, the Urban Thinkscape project in Philadelphia, involves puzzle benches at bus stops, with puzzles designed to build STEM skills. Before the benches were installed, she said, parents waiting for buses were almost uniformly looking at their cellphones. “We put one up in a park,” she said.

Urban Thinkscape: Using the city as an agent of change. Eight adults and children wait at a bus stop, all fixated on their handheld devices, checking emails, texting, and playing games. 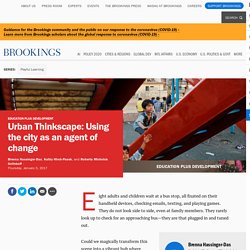 They do not look side to side, even at family members. They rarely look up to check for an approaching bus—they are that plugged in and tuned out. 'Play to Learn' Discussion. Low-cost play ideas: video. Primary school shake-up to focus on ‘play-led’ learning. Children at primary schools would not study traditional subjects until as late as 10 years of age, under proposals being considered by policymakers.

Instead, there would be a much greater emphasis on creative play during the early years of primary school, and broader areas of learning in later years. The reforms are based loosely on some of the features of top-performing education systems in countries such as Finland, as well as new research on how children learn. The proposals, drafted by the National Council for Curriculum and Assessment (NCCA), represent some of the biggest proposed changes to teaching and learning at primary level in more than two decades. Why Movement is Essential in Early Childhood. With so few years under their belts, my 3- and 6-year-old daughters are still learning to inhabit their bodies. They are learning how to maneuver themselves physically, how to orient themselves in space.

As Vanessa Durand, a pediatrician at St. Christopher’s Hospital for Children in Philadelphia, says, freedom of movement is necessary for children to meet their developmental milestones: “Children learn by experiencing their world using all of their senses. The cognitive benefits of play: Effects on the learning brain. 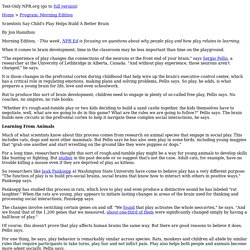 They are often meticulously prepared to be aesthetically pleasing, covered in laminated words and pictures with the aim of enticing children in. But this is where I encountered a problem: in these areas, children are expected to come together to play out adult scenarios that are consistent with these themes. Yet how many children have visited a travel agent to book a holiday recently, or operated on a pet dog in a vet’s surgery? For the majority of children, themed areas such as those described above are simply too alien for high-quality cooperative play to develop – which is why I found the children in my class would revert back to playing ‘mums and dads’ by mid-morning, rather than booking a holiday to Costa Rica, as the poster on the wall in the travel agent suggested!

I decided action had to be taken; it was time to improve my role play corner. The benefits.