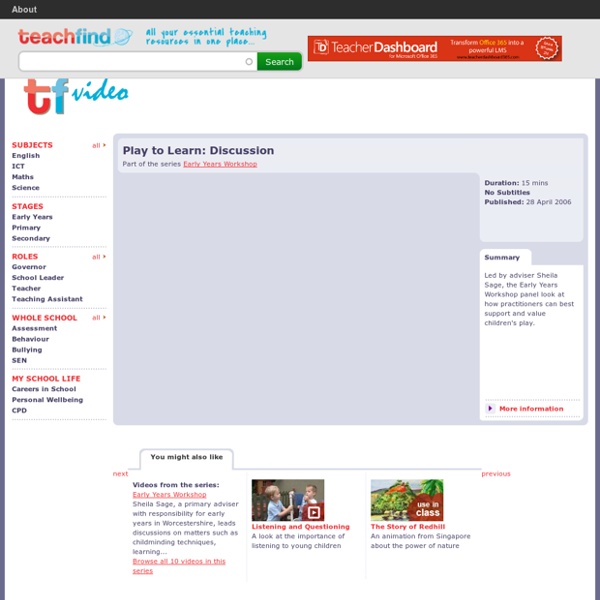 21 of the Best Early Years Books for International Friendship Day We know that skills like empathy aren’t fully developed until later in a child’s life, which is why there are so many stories on friendship and how to treat people aimed at Early Years. International Friendship Day, then, is a great opportunity to share some of these amazing books with your children. It does, however, fall on Sunday 30 July. So celebrating on the day itself is going to be difficult, doubly so for Reception classes who are on summer holidays. Here are our picks for some top tales that touch on various aspects of friendship that kids will love. The cognitive benefits of play: Effects on the learning brain © 2008 - 2014, Gwen Dewar, Ph.D., all rights reserved Science supports many of our intuitions about the benefits of play. Playful behavior appears to have positive effects on the brain and on a child’s ability to learn. In fact, play may function as an important, if not crucial, mode for learning. Want specifics? Here are some examples.

The benefits of toy blocks © 2008-2016 Gwen Dewar, all rights reserved It's universal, and it's powerful: Toy blocks and other construction toys can change the way kids think. Building projects stimulate creativity, and sharpen crucial skills. As developmental psychologist Rachel Keen notes, parents and teachers "need to design environments that encourage and enhance problem solving from a young age" (Keen 2011). Deconstructing Role Play – Provide the Resources, Step Back and Watch Children’s Learning Flourish Hospital, vet’s surgery, post office, travel agent – themed role play areas are often seen as a must for an early years setting. They are often meticulously prepared to be aesthetically pleasing, covered in laminated words and pictures with the aim of enticing children in. But this is where I encountered a problem: in these areas, children are expected to come together to play out adult scenarios that are consistent with these themes. Yet how many children have visited a travel agent to book a holiday recently, or operated on a pet dog in a vet’s surgery? For the majority of children, themed areas such as those described above are simply too alien for high-quality cooperative play to develop – which is why I found the children in my class would revert back to playing ‘mums and dads’ by mid-morning, rather than booking a holiday to Costa Rica, as the poster on the wall in the travel agent suggested! I decided action had to be taken; it was time to improve my role play corner.

Why Movement is Essential in Early Childhood With so few years under their belts, my 3- and 6-year-old daughters are still learning to inhabit their bodies. They are learning how to maneuver themselves physically, how to orient themselves in space. As Vanessa Durand, a pediatrician at St. Christopher’s Hospital for Children in Philadelphia, says, freedom of movement is necessary for children to meet their developmental milestones: “Children learn by experiencing their world using all of their senses.

This ‘Kindness Curriculum’ Is Free And Should Be Used In Every Classroom Imagine living in a world that valued kindness enough to teach it along with academics. Educators would teach kids to manage their emotions in addition to standard curriculum such as math and science. Sounds pretty amazing, doesn’t it?

Taking Playtime Seriously So part of encouraging play is pulling back on how much programmed goal-directed learning we expect from very young children, to leave them time for the fun of exploration, curiosity and, well, fun. But another important part may be creating environments that foster children’s play and parents’ participation and attention. Dr. Hirsh-Pasek, who is a senior fellow at the Brookings Institution, cited its Learning Landscapes Initiative, which aims to set up learning opportunities in public places where people will encounter them.

Convention on the Rights of the Child Text in PDF Format Adopted and opened for signature, ratification and accession by General Assembly resolution 44/25 of 20 November 1989 entry into force 2 September 1990, in accordance with article 49 Preamble The States Parties to the present Convention, Considering that, in accordance with the principles proclaimed in the Charter of the United Nations, recognition of the inherent dignity and of the equal and inalienable rights of all members of the human family is the foundation of freedom, justice and peace in the world, Bearing in mind that the peoples of the United Nations have, in the Charter, reaffirmed their faith in fundamental human rights and in the dignity and worth of the human person, and have determined to promote social progress and better standards of life in larger freedom,

Observation, Assessment and Planning - Early Years Matters The EYFS Profile summarises and describes children’s attainment at the end of the EYFS. It is based on on-going observation and assessment in the three prime and four specific areas of learning, and the three learning characteristics, set out below: The prime areas of learning: • communication and language • physical development • personal, social and emotional development

Symbolic play and language development - ScienceDirect 1. Introduction 1.1. Relationship between symbolic play and language Symbolic play, or pretend play, and language are known to be highly interrelated (DeLoache, 2002, McCune, 2010, Smith and Jones, 2011). Being Multilingual: The natives and the speakers Let me start with the good news. We are, all of us without exception, native speakers. This may come as a surprise to those of us who have had close encounters with the second/foreign language world, but is nonetheless true. It means that we are all competent users of language – more or less competent, of course, depending on all sorts of individual and social factors that make us clumsy or proficient in whatever we do.

Does my toddler have a short attention span because she won’t sit still for a story? A: It is perfectly normal for toddlers to not sit still very long—period. Most don’t like to stay in one place for long now that they can explore in so many new ways—by running, jumping, and climbing. So, an adult’s idea of snuggling on the couch to hear a story may not be the same idea a toddler has for story-time.