The Power (and Peril) of Praising Your Kids 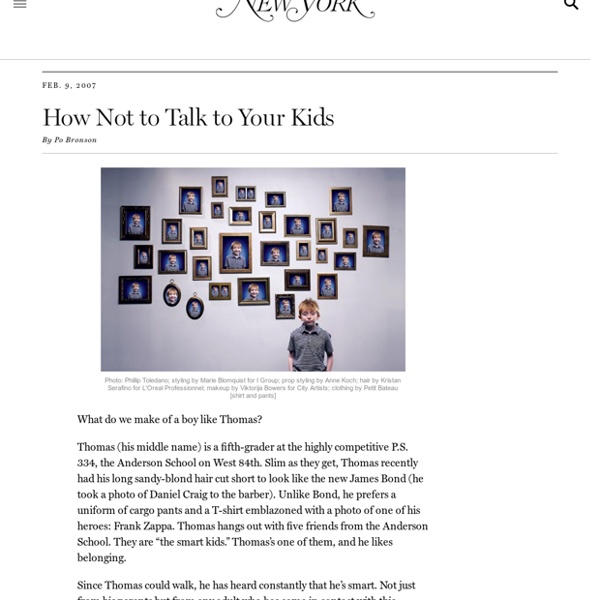 What do we make of a boy like Thomas? Thomas (his middle name) is a fifth-grader at the highly competitive P.S. 334, the Anderson School on West 84th. Slim as they get, Thomas recently had his long sandy-blond hair cut short to look like the new James Bond (he took a photo of Daniel Craig to the barber). Unlike Bond, he prefers a uniform of cargo pants and a T-shirt emblazoned with a photo of one of his heroes: Frank Zappa. Thomas hangs out with five friends from the Anderson School. They are “the smart kids.” Since Thomas could walk, he has heard constantly that he’s smart. But as Thomas has progressed through school, this self-awareness that he’s smart hasn’t always translated into fearless confidence when attacking his schoolwork. For instance, in the early grades, Thomas wasn’t very good at spelling, so he simply demurred from spelling out loud. Thomas is not alone. When parents praise their children’s intelligence, they believe they are providing the solution to this problem.

What to consider when teaching English in large classes How many students do you teach? Do you feel that your classes are too big? Author and education consultant Jason Anderson looks at the issues and offers some potential solutions. For many of us, our classes are larger than we would like them to be. Let’s lose the ADHD label and find the child When I trained as a primary school teacher 15 years ago, these were some of the words used to describe children with ADHD: ‘Difficult.’ ‘Challenging.’ ‘Disruptive.’ There were others, whispered by harassed-looking teachers in the staffroom or concerned parents at the school gates, but none seemed to be positive. Schema and Fairies Schemas are one of those things that divide practitioners, like fairies at the bottom of the garden. You either believe in them and are in absolute awe at how amazing they are, or you just don’t believe they exist. It’s really interesting when you discuss this with people and it’s extra exciting when a ‘non-believer’ suddenly says “That describes my key child exactly!!”

How can parents and teachers best educate young children? What principles can both teachers and parents bring to the education of very young children? Gillian Craig, who was part of the Learning Time with Shaun and Timmy writing team, explains. As teachers and parents, we follow certain principles in our roles. Often though, these principles overlap and all we need to do is recognise and reinforce these areas. Ask (the right) questions FAQ: Raising Bilingual Children Why want bilingual children? There are many reasons, but the two most common are: 1) The parents speak different languages (say, an American woman and a Turkish man). 2) The parents speak the same language, but live in a community where most people speak something else (say, a Korean couple living in the USA). Importance of play for babies & children Australian Government Department of Education and Training (2009). Belonging, being and becoming: The early years learning framework for Australia. Canberra: Commonwealth of Australia. Retrieved 19 June 2019 from Cole-Hamilton, I. (2011).

The Brain-Changing Power of Conversation The Science Researchers used highly faithful audio recorders — a system called Language Environment Analysis (known as LENA) — to capture every word spoken or heard by 36 4–6 year olds from various socioeconomic backgrounds over two full days. The recordings were analyzed to measure the number of words spoken by each child, the number of words spoken to each child, and the number of conversational turns — back-and-forth exchanges initiated by either adult or child.