Dot Net Example (ActiveQt) If you need to combine Qt and Win Forms widgets in the same application, you might want to use the higher-level QtWinForms Solution instead. 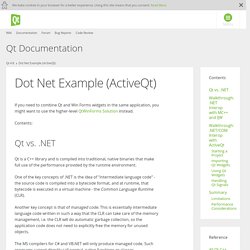 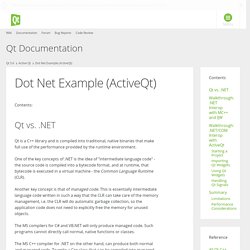 One of the key concepts of .NET is the idea of "intermediate language code" - the source code is compiled into a bytecode format, and at runtime, that bytecode is executed in a virtual machine - the Common Language Runtime (CLR). Another key concept is that of managed code. This is essentially intermediate language code written in such a way that the CLR can take care of the memory management, i.e. the CLR will do automatic garbage collection, so the application code does not need to explicitly free the memory for unused objects. Managed Extensions for C++ Managed Extensions for C++ or just Managed C++ is a now deprecated Microsoft set of deviations from C++, including grammatical and syntactic extensions, keywords and attributes, to bring the C++ syntax and language to the .NET Framework. 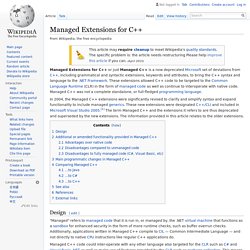 These extensions allowed C++ code to be targeted to the Common Language Runtime (CLR) in the form of managed code as well as continue to interoperate with native code. Managed C++ was not a complete standalone, or full-fledged programming language. In 2004, the Managed C++ extensions were significantly revised to clarify and simplify syntax and expand functionality to include managed generics. These new extensions were designated C++/CLI and included in Microsoft Visual Studio 2005.[1] The term Managed C++ and the extensions it refers to are thus deprecated and superseded by the new extensions. 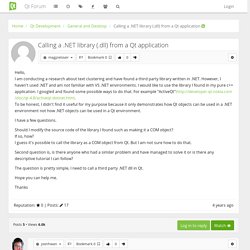 I just used @#import "myLib.tlb"@ keyword. However, I cannot do the same things for a large library called WordNet.Net. I also tried the other way around and attempted to run examples/dotnet/wrapper/wrapper.sln , but it gives an error. @1>------ Build started: Project: lib, Configuration: Release Win32 ------ 1>Performing Custom Build Step 1>The system cannot find the path specified. 1>Project : error PRJ0019: A tool returned an error code from "Performing Custom Build Step" 1>Build log was saved at " 1>lib - 1 error(s), 0 warning(s)@

How to register .NET Assembly for COM Interop ? Do you want to use your .NET DLL (assembly) from VB6 or C++ application (native code) ? 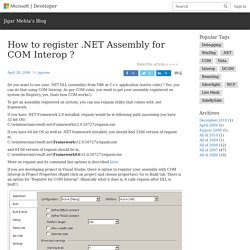 Yes, you can do that using COM Interop. As per COM rules, you need to get your assembly registered on system (in Registry, yes, thats how COM works!). To get an assembly registered on system, you can use regasm utility that comes with .net framework. If you have .NET Framework 2.0 installed, regasm would be in following path (assuming you have 32-bit OS) C:\windows\microsoft.net\Framework\v2.0.50727\regasm.exe If you have 64-bit OS as well as .NET framework installed, you should find 32bit version of regasm in, C:\windows\microsoft.net\Framework\v2.0.50727\regasm.exe and 64 bit version of regasm should be in, C:\windows\microsoft.net\Framework64\v2.0.50727\regasm.exe There are two options while registering the assembly for COM Interop, Stay tuned..

Active Qt 5.6. QAxFactory Class. The QAxFactory class defines a factory for the creation of COM components. 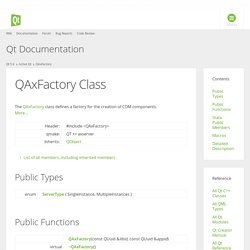 [virtual] QUuid QAxFactory::classID(const QString &key) const Reimplement this function to return the class identifier for each key returned by the featureList() implementation, or an empty QUuid if this factory doesn't support the value of key. The default implementation interprets key as the class name, and returns the value of the Q_CLASSINFO() entry "ClassID". [pure virtual] QObject *QAxFactory::createObject(const QString &key) [virtual] bool QAxFactory::createObjectWrapper(QObject *object, IDispatch **wrapper) QAxAggregated Class. The QAxAggregated class is an abstract base class for implementations of additional COM interfaces. 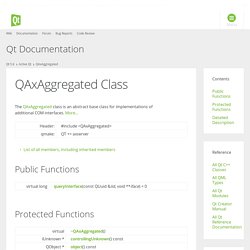 More... List of all members, including inherited members. QAxBindable Class. The QAxBindable class provides an interface between a QWidget and an ActiveX client. 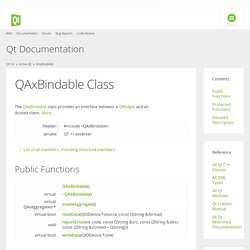 More... List of all members, including inherited members Public Functions Protected Functions Detailed Description The QAxBindable class provides an interface between a QWidget and an ActiveX client. The functions provided by this class allow an ActiveX control to communicate property changes to a client application. When implementing the property write function, use requestPropertyChange() to get permission from the ActiveX client application to change this property.