Facebook Has Just Added In-Stream Ads. Ads on Facebook have pretty much always had their place ; we know they’re going to pop up on the right hand side, clearly labelled under sponsored content. 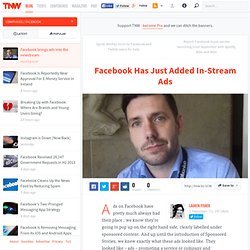 And up until the introduction of Sponsored Stories, we knew exactly what these ads looked like. They looked like – ads – promoting a service or company and following a standard format. Sponsored Stories changed that once when the content advertised became ‘natural’ stories on Facebook. Now Facebook have gone one further than that and introduced something that has far-reaching consequences for the role of advertising on the site : ads in the newstream. Facebook Wants to Mimic Click-Through Success of Twitter Ads. 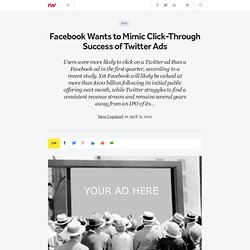 Yet Facebook will likely be valued at more than $100 billion following its initial public offering next month, while Twitter struggles to find a consistent revenue stream and remains several years away from an IPO of its own. Apple Won't Let You See What iPhone Apps Do With Your Data. Do you know what your apps are doing when you are not paying attention? 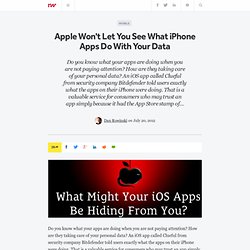 How are they taking care of your personal data? An iOS app called Clueful from security company Bitdefender told users exactly what the apps on their iPhone were doing. That is a valuable service for consumers who may trust an app simply because it had the App Store stamp of approval, when not all apps are so trustworthy. Yet Apple has removed Clueful from the App Store for unspecified reasons. According to Bitdefender, Clueful “identifies deviant apps on your iPhone. Clueful would also let you know if an app integrated a mobile analytics platform so it could track a user’s behavior within the app. Acxiom Consumer Data, Often Unavailable to Consumers.

I recently asked to see the information held about me by the Acxiom Corporation, a database marketing company that collects and sells details about consumers’ financial status, shopping and recreational activities to banks, retailers, automakers and other businesses. 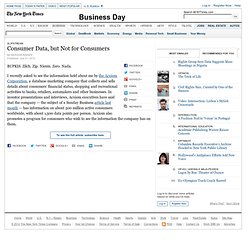 In investor presentations and interviews, Acxiom executives have said that the company — the subject of a Sunday Business article last month — has information on about 500 million active consumers worldwide, with about 1,500 data points per person. Acxiom, the Quiet Giant of Consumer Database Marketing. Fair trade? Facebook IPO: Can Facebook Beat the Google Display Network in Online Advertising? DATA: Google Totally Blows Away Facebook On Ad Performance. 3 things to watch for in Facebook's earnings. Colin Walker - Google+ - Could a paid twitter work? As app.net is being repurposed… Zero.pdf (application/pdf Object)

Freemium has run its course. “We are now seeing the end of the freemium model — signing up users for free and trying to upsell,” said Christian Vanek, CEO of the Boulder-based SurveyGizmo, in a recent phone conversation.“6.5 million unique users is not all that it’s cracked up to be. I don’t want hits. I want revenue. I want a real business,” said Matt Wensing, founder and CEO of Stormpulse, in an interview with Mixergy. “Make a product people want to pay for,” said Marco Arment, founder of Instapaper, in a Planet Money interview. Understanding monetization in platform business. Free vs. paid: Would Twitter be better if you paid for it? Join the Movement - App.net. What Twitter could have been by Dalton Caldwell. I remember when you could go to Twitter.com and see the global firehose on the front page. 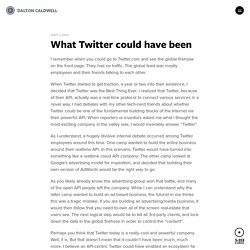 They had no traffic. The global feed was mostly employees and their friends talking to each other. Announcing an audacious proposal by Dalton Caldwell. The overwhelmingly positive response to my blogpost, What Twitter could have been has been inspiring. 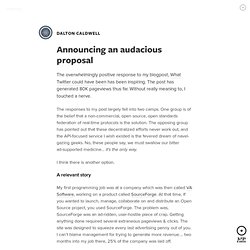 The post has generated 80K pageviews thus far. Without really meaning to, I touched a nerve. The responses to my post largely fell into two camps. One group is of the belief that a non-commercial, open source, open standards federation of real-time protocols is the solution. The opposing group has pointed out that these decentralized efforts never work out, and the API-focused service I wish existed is the fevered dream of navel-gazing geeks. I think there is another option. App.net 3rd-party revshare proposal by Dalton Caldwell. I have been thinking a lot about what makes great 3rd-party developer ecosystems work. At the end of the day, it really boils down to financial incentives, and the ability of an ecosystem to support 3rd-party devs making a living and maintaining a good lifestyle. If the rules are setup correctly, great 3rd-party development platforms create a strong financial incentive for 3rd-party developers to make great software.

Why? Healthy platforms allow 3rd-party developers to make lots of money. If you can setup the financial incentives in the right way, people are able to make a great living by building great software that is useful and makes people happy. On the other hand, if the “rules” of a development platform are setup without intention or thoughtfulness, the ecosystem will fail. Frighteningly Ambitious Startup Ideas. March 2012 One of the more surprising things I've noticed while working on Y Combinator is how frightening the most ambitious startup ideas are. 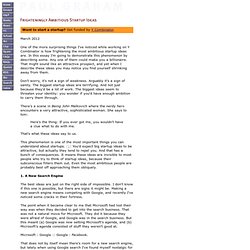