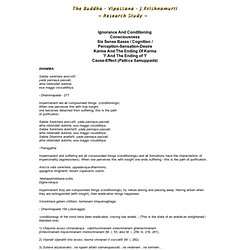 Impermanent are all compounded things. (conditionings) When one perceives this with true insight, one becomes detached from suffering; this is the path of purification. Sabbe Sankhara anicca'ti, yada pannaya passati, atha nibbindati dukkhe, esa maggo visuddhiya. -Theragatha Impermanent and suffering are all compounded things (conditionings) and all formations have the characteristic of impersonality (egolessness). Anicca vata sankhara, uppadavaya-dhammino; uppajjitva nirujjhanti, tesam vupasamo sukho. -Mahaparinibbana-sutta, Digha-nikaya Impermanent truly are compounded things (conditionings), by nature arising and passing away. Visankhara gatam chittam, tanhanam khayamajjhaga. Oh! So if our lives are determined by our karma, can we change it? Of course we can. 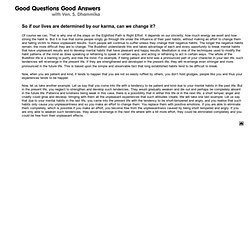 That is why one of the steps on the Eightfold Path is Right Effort. It depends on our sincerity, how much energy we exert and how strong the habit is. But it is true that some people singly go through life under the influence of their past habits, without making an effort to change them and falling victim to these unpleasant results. Such people will continue to suffer unless they change their negative habits. The longer the negative habits remain, the more difficult they are to change.

Now, when you are patient and kind, it tends to happen that you are not so easily ruffled by others, you don’t hold grudges, people like you and thus your experiences tends to be happier. On Reincarnation. Do you Buddhists believe in rebirth as an animal in the next life? 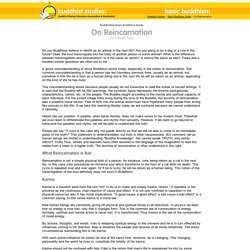 Are you going to be a dog or a cow in the future? Does the soul transmigrate into the body of another person or some animal? Buddhism in a Nutshell - Karma. Kamma or the Law of Moral Causation We are faced with a totally ill-balanced world. 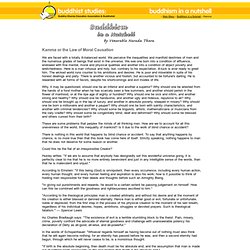 We perceive the inequalities and manifold destinies of men and the numerous grades of beings that exist in the universe. We see one born into a condition of affluence, endowed with fine mental, moral and physical qualities and another into a condition of abject poverty and wretchedness. Here is a man virtuous and holy, but, contrary to his expectation, ill-luck is ever ready to greet him. The wicked world runs counter to his ambitions and desires. Why, it may be questioned, should one be an inferior and another a superior? These are some problems that perplex the minds of all thinking men. There is nothing in this world that happens by blind chance or accident. Could this be the fiat of an irresponsible Creator? "In giving out punishments and rewards, he would to a certain extent be passing judgement on himself.

Commenting on human sufferings and God, Prof. "What! Fundamentals of Buddhism: Karma. Today we have come to a couple of related ideas which are common in Buddhism and they are the ideas of karma and rebirth. 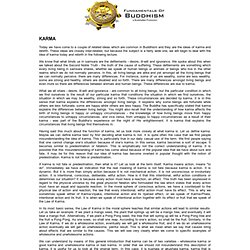 These ideas are closely inter-related, but because the subject is a fairly wide one, we will begin to deal with the idea of karma today and rebirth in the following lecture. We know that what binds us in samsara are the defilements - desire, ill-will and ignorance. We spoke about this when we talked about the Second Noble Truth - the truth of the cause of suffering. These defilements are something which every living being in samsara shares, whether we speak of human beings or animals or beings who live in the other realms which we do not normally perceive. In this, all living beings are alike and yet amongst all the living beings that we can normally perceive, there are many differences. Having said this much about the function of karma, let us look more closely at what karma is.

If karma is not fate or predestination, then what is it? Basic Buddhism: The Theory of Karma. Karma is the law of moral causation. 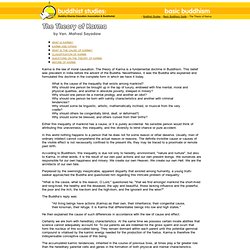 The theory of Karma is a fundamental doctrine in Buddhism. This belief was prevalent in India before the advent of the Buddha. Nevertheless, it was the Buddha who explained and formulated this doctrine in the complete form in which we have it today. What is the cause of the inequality that exists among mankind? Why should one person be brought up in the lap of luxury, endowed with fine mental, moral and physical qualities, and another in absolute poverty, steeped in misery? Either this inequality of mankind has a cause, or it is purely accidental.

In this world nothing happens to a person that he does not for some reason or other deserve. According to Buddhism, this inequality is due not only to heredity, environment, "nature and nurture", but also to Karma. The Buddha’s reply was: "All living beings have actions (Karma) as their own, their inheritance, their congenital cause, their kinsman, their refuge. They are: Excerpt from: