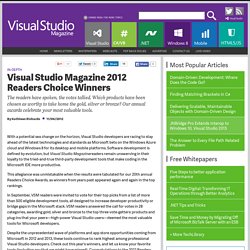 Which products have been chosen as worthy to take home the gold, silver or bronze? Our annual awards celebrate your most valuable tools. With a potential sea change on the horizon, Visual Studio developers are racing to stay ahead of the latest technologies and standards as Microsoft bets on the Windows Azure cloud and Windows 8 for its desktop and mobile platforms. This allegiance was unmistakable when the results were tabulated for our 20th annual Readers Choice Awards, as winners from years past appeared again and again in the top rankings.

In September, VSM readers were invited to vote for their top picks from a list of more than 500 eligible development tools, all designed to increase developer productivity or bridge gaps in the Microsoft stack. 2012 Readers Choice Gold Winners Web Hosting Go Daddy Go Daddy Operating Co. About the Author. Essential .NET Developer Workstation - 2013 Edition — Colin Bowern. Having put together this list for the third or forth time I thought it was time to share more broadly what I have see as the essential tools for .NET developers. 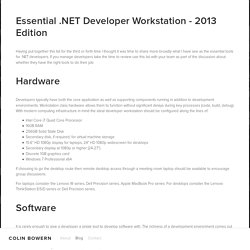 If you manage developers take the time to review use this list with your team as part of the discussion about whether they have the right tools to do their job. Developers typically have both the core application as well as supporting components running in addition to development environments. Workstation class hardware allows them to function without significant delays during key processes (code, build, debug). With modern computing infrastructure in mind the ideal developer workstation should be configured along the lines of: Intel Core i7 Quad Core Processor16GB RAM256GB Solid State DiskSecondary disk, if required, for virtual machine storage15.6” HD 1080p display for laptops, 24" HD 1080p widescreen for desktopsSecondary display at 1080p or higher (24-27”)Discrete 1GB graphics cardWindows 7 Professional x64.

C# - Does FirstOrDefault return a reference to the item in the collection or the value? C# - Is Task.Result the same as .GetAwaiter.GetResult()? C# - Await on a completed task same as task.Result? Interview Questions and Answers For .NET,VB.NET,SQL Server,C#,Design Pattern,Sharepoint,WCF, WPF,WWF,MVC,Silverlight,Entity Framework,ADO.NET,Reporting Services,Java,C# training,CSharp,JQuery,Javascript,ASP.NET HTML 5 interview questions,programming inter. .NET Interview Preparation videos. Learn ASP.NET MVC 5 ( Model view controller) step by step in 2 days ( 16 hours) 242,746 views 11 months ago This video will teach you ASP.NET MVC 5 in 2 days i.e. in 16 hours. 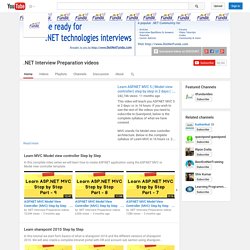 If you wish to see the rest of the videos you need to subscribe to Questpond, below is the complete syllabus of what we have covered. MVC stands for Model view controller architecture. Below is the complete syllabus of Learn MVC in 16 hours i.e. 2 days. Learn MVC 5 in 2 daysLab 1 : - Simple Hello world(20 Minutes)Lab 2 : - Explain MVC Routing(10 Minutes)? Setting up Visual Studio Code. Mac OS X Download Visual Studio Code for Mac OS XDouble-click on VSCode-osx.zip to expand the contentsDrag Visual Studio Code.app to the Applications folder, making it available in the LaunchpadAdd VSCode to your Dock by right-clicking on the icon and choosing Options, Keep in Dock Tip: If you want to run VSCode from the terminal, append the following to your .bashrc file code () { if [[ $# = 0 ]] then open -a "Visual Studio Code" else [[ $1 = /* ]] && F="$1" || F="$PWD/${1#./}" open -a "Visual Studio Code" --args "$F" fi } 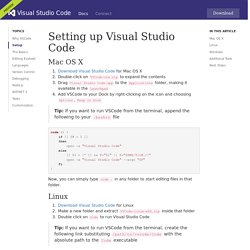 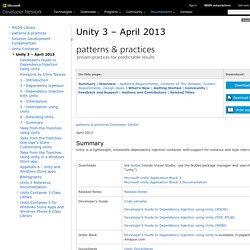 Overview Unity is a lightweight, extensible dependency injection container with support for constructor, property, and method call injection. It facilitates building loosely coupled applications and provides developers with the following advantages: Simplified object creation, especially for hierarchical object structures and dependencies. Unity is a general-purpose container for use in any type of Microsoft.NET Framework-based application. In addition, Unity is extensible. This release adds support for Windows Store apps as well as the registration by convention feature to ease the task of configuring Unity. Audience Requirements These reusable components and guidance are intended primarily for software developers and software architects.

Contents of This Release Microsoft Unity 3 contains the following: How to design a Fluent Interface. Martin Fowler coined the term “FluentInterface” to describe objects that expose an interface that flows, and is designed to be readable and concise. 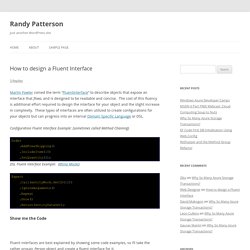 The cost of this fluency is additional effort required to design the interface for your object and the slight increase in complexity. These types of interfaces are often utilized to create configurations for your objects but can progress into an internal Domain Specific Language or DSL. Configuration Fluent Interface Example: (sometimes called Method Chaining) Creating a C# Fluent API - Tech.pro. Simple and fast .NET and Mono Open Source web services framework.