R vs R : Capablanca vs Tartakower (1924) LIFE Master AJ: To me, the amazing thing was how similar it was to some of Nimzovich's (Aron Nimzowitsch) celebrated victories. 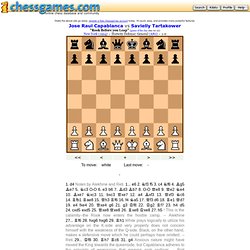 Black gave White doubled QBP's. He was OOOH SOOO VERY CLOSE to the 'magic formula.' Yet, it was Tartakower's failure to completely grasp all of the doctrine that Nimzovich outlined when playing against the doubled Pawns ... and this was eventually his undoing. And Capa's play was so darn near perfect ... and PLEASE remember!!!! ... ... ... I don't think there is another game like this (that predates it). R vs R: Alekhine vs Capablanca (1927) Petrosianic: <Alekhine deserved to win the match because he simply outplayed Capablanca. 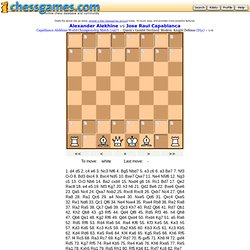 > Actually, their overall level of play seemed to be about the same, but Capablanca missed more opportunities, the worst of which was blowing the win on the last move of Game 27. Alekhine didn't do things like that. Well, Capablanca did the same his whole career. +5-0=6 against Nimzo, +5-0=2 against Bogolubov. I have the strangest feeling I've heard that analogy somewhere before. R vs R: Bondarevsky vs Keres (1939) Saavedra position. Saavedra position White to move and win Solution[edit] The position as it is usually given today, with White to move and win, is shown in the diagram to the right. 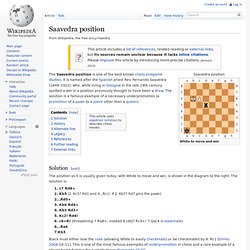 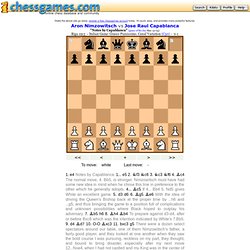 > The positions after ...Bxc5 and ...Bxc2 are not blockades. There is plenty of mobility and fight here, although drawish. You are right. I said that 33...b5 is weaker than 33...Ke6 and I meant it. As an example, by not playing ...b5, I give myself some wiggle room on the Queenside. I really liked studying this endgame over the weekend. Good K vs Bad B: Saidy vs Fischer. Notyetagm: 23 ... ? 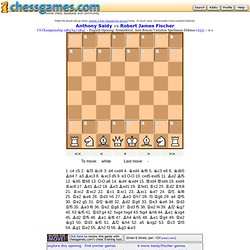 Click for larger view <<<<Daniel King: Power Play 8 - Knights and Bishops>>> By Michael Jeffreys While ChessBase uses several chess experts to make their instructional DVDs, my favorite is GM Daniel King. I have been a big fan of his since his days commenting on the exciting Intel Grand Prix matches with GM Maurice Ashley back in the mid-nineties.

This position is from Saidy-Fischer, 1964 US Championship, and is the first example from the DVD. Material is equal with both sides having but a single minor piece and six pawns (with three pawn islands each), so it must be a draw, right? Daniel King: Power Play 8 Knights and Bishops. Somewhat surprisingly, it is in fact BLACK who is better here, if only slightly. King explains that the key is figuring out the best square for the knight. <It turns out that the magic square for Black’s knight is e6, where it not only attacks the d4 pawn, but also covers f4 and g5, thus denying White’s bishop the use of those two dark squares.