Quantum physics says goodbye to reality. Some physicists are uncomfortable with the idea that all individual quantum events are innately random. 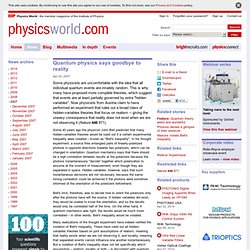 This is why many have proposed more complete theories, which suggest that events are at least partially governed by extra "hidden variables". Now physicists from Austria claim to have performed an experiment that rules out a broad class of hidden-variables theories that focus on realism -- giving the uneasy consequence that reality does not exist when we are not observing it (Nature 446 871).

Some 40 years ago the physicist John Bell predicted that many hidden-variables theories would be ruled out if a certain experimental inequality were violated – known as "Bell's inequality". In his thought experiment, a source fires entangled pairs of linearly-polarized photons in opposite directions towards two polarizers, which can be changed in orientation. Bell's trick, therefore, was to decide how to orient the polarizers only after the photons have left the source. 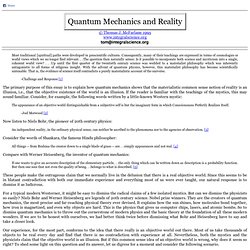 McFarlane 1995www.integralscience.org Most traditional [spiritual] paths were developed in prescientific cultures. Consequently, many of their teachings are expressed in terms of cosmologies or world views which we no longer find relevant. . .The question then naturally arises: Is it possible to incorporate both science and mysticism into a single, coherent world view? . . .Up until the first quarter of the twentieth century science was wedded to a materialist philosophy which was inherently antagonistic to all forms of religious insight. With the advent of quantum physics, however, this materialist philosophy has become scientifically untenable. How Quantum Mechanics Screws with our Perception of Reality. Consciousness & quantum physics ~ Reality is an illusion. Quantum Mechanics and Reality. 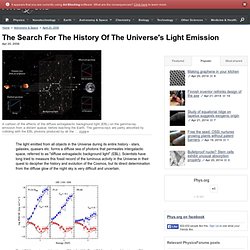 Scientists have long tried to measure this fossil record of the luminous activity in the Universe in their quest to decipher the history and evolution of the Cosmos, but its direct determination from the diffuse glow of the night sky is very difficult and uncertain. Very high energy (VHE) gamma-rays, some 100,000,000,000 times more energetic than normal light, offer an alternative way to probe this background light, and UK researchers from Durham University in collaboration with international partners used the High Energy Stereoscopic System (HESS) gamma-ray telescopes in the Khomas Highlands of Namibia to observe several quasars (the most luminous VHE gamma-ray sources known) with this goal in mind.

Source: PPARC. The World as a Hologram. What is a Higgs Boson? Documentary The Universe Quantum Physics Microscopic Universe. Dark Matter: The Larger Invisible Universe. Normal matter—you, me, oatmeal, mountains, oceans, moons, planets, galaxies—make up about twenty-percent of the universe; the other eighty-percent is dark matter—star-stuff we cannot see or detect…yet. 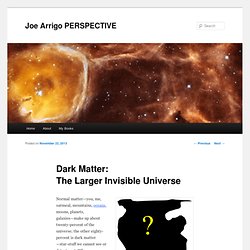 Why are scientists so certain this enigmatic matter exists? Because the evidence permeates the universe, first observed by Fritz Zwicky, when he measured the motions of galaxies and calculated that there wasn’t enough visible matter to affect galaxies to extent they were being pulled around.WWWFirst, there isn’t enough gravitational force within galaxies to bind and hold them in their current formation; then there is an invisible element that keeps them rotating faster than scientists would expect, clusters of galaxies bend and distort light more than they should, and supercomputer simulations exhibit that clouds of ordinary matter in the early universe did not have enough gravity to create the tight formations of galaxies we now see.

The Theory of Everything. The above equation was written by Dr. 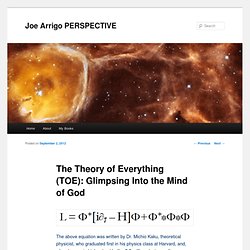 Michio Kaku, theoretical physicist, who gradu­ated first in his physics class at Harvard, and, when he was in high school built a 2.3 million electron volt atom-smasher in his parents garage. It is an equation for String Field Theory—a theory that may unite The Theory of Relativity with Quantum Theory, into a uni­fied theory called The Theory of Everything. Theoretical physicists are those scientists who work in that twilight zone cutting edge realm be­tween reality and science fiction. In a "Rainbow" Universe Time May Have No Beginning. What if the universe had no beginning, and time stretched back infinitely without a big bang to start things off? 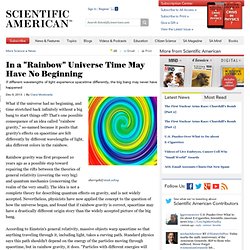 That's one possible consequence of an idea called "rainbow gravity," so-named because it posits that gravity's effects on spacetime are felt differently by different wavelengths of light, aka different colors in the rainbow. Rainbow gravity was first proposed 10 years ago as a possible step toward repairing the rifts between the theories of general relativity (covering the very big) and quantum mechanics (concerning the realm of the very small). The idea is not a complete theory for describing quantum effects on gravity, and is not widely accepted. Four things you might not know about dark matter. Not long after physicists on experiments at the Large Hadron Collider at CERN laboratory discovered the Higgs boson, CERN Director-General Rolf Heuer was asked, “What’s next?” 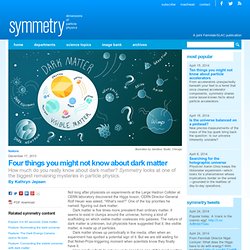 One of the top priorities he named: figuring out dark matter. Dark matter is five times more prevalent than ordinary matter. It seems to exist in clumps around the universe, forming a kind of scaffolding on which visible matter coalesces into galaxies. The nature of dark matter is unknown, but physicists have suggested that it, like visible matter, is made up of particles. Dark matter shows up periodically in the media, often when an experiment has spotted a potential sign of it. Dark energy and dark matter. How world works. Bohr and beyond: a century of quantum physics › Opinion (ABC Science) In Depth › Analysis and Opinion Our understanding of the quantum world began with Niels Bohr's discovery of the quantum atom in 1913. 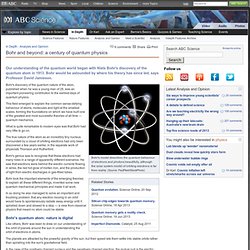 Bohr would be astounded by where his theory has since led, says Professor David Jamieson. Bohr's discovery of the quantum nature of the atom, published when he was a young man of 28, was an important pioneering contribution to the earliest days of quantum physics. This field emerged to explain the common sense-defying behaviour of atoms, molecules and light at the smallest scales, forming the foundations on which we have built one of the greatest and most successful theories of all time — quantum mechanics. What is quite remarkable to modern eyes was that Bohr had very little to go on. Symphony of Science - the Quantum World! Higgs boson: Call to rename particle to acknowledge other scientists. 22 April 2013Last updated at 13:00 ET By Pallab Ghosh Science correspondent, BBC News "Fathers" of the Higgs, L-R: Francois Englert, Peter Higgs, Carl Hagen and Gerald Guralnik. 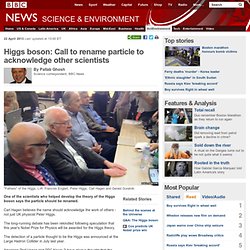 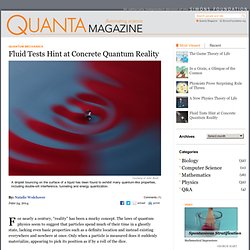 The laws of quantum physics seem to suggest that particles spend much of their time in a ghostly state, lacking even basic properties such as a definite location and instead existing everywhere and nowhere at once. Only when a particle is measured does it suddenly materialize, appearing to pick its position as if by a roll of the dice. Uncertainty reigns over Heisenberg's measurement analogy. A row has broken out among physicists over an analogy used by Werner Heisenberg in 1927 to make sense of his famous uncertainty principle. The analogy was largely forgotten as quantum theory became more sophisticated but has enjoyed a revival over the past decade. While several recent experiments suggest that the analogy is flawed, a team of physicists in the UK, Finland and Germany is now arguing that these experiments are not faithful to Heisenberg's original formulation.

Heisenberg's uncertainty principle states that we cannot measure certain pairs of variables for a quantum object – position and momentum, say – both with arbitrary accuracy. Planck constant. Plaque at the Humboldt University of Berlin: "Max Planck, discoverer of the elementary quantum of action h, taught in this building from 1889 to 1928. " In 1905 the value (E), the energy of a charged atomic oscillator, was theoretically associated with the energy of the electromagnetic wave itself, representing the minimum amount of energy required to form an electromagnetic field (a "quantum"). Further investigation of quanta revealed behaviour associated with an independent unit ("particle") as opposed to an electromagnetic wave and was eventually given the term photon.

The Planck relation now describes the energy of each photon in terms of the photon's frequency. Quantum spacetime. In mathematical physics, the concept of quantum spacetime is a generalization of the usual concept of spacetime in which some variables that ordinarily commute are assumed not to commute and form a different Lie algebra. The choice of that algebra still varies from theory to theory. As a result of this change some variables that are usually continuous may become discrete.

Often only such discrete variables are called "quantized"; usage varies. Quantum entanglement. Quantum entanglement is a physical phenomenon that occurs when pairs or groups of particles are generated or interact in ways such that the quantum state of each particle cannot be described independently – instead, a quantum state may be given for the system as a whole. Such phenomena were the subject of a 1935 paper by Albert Einstein, Boris Podolsky and Nathan Rosen,[1] describing what came to be known as the EPR paradox, and several papers by Erwin Schrödinger shortly thereafter.[2][3] Einstein and others considered such behavior to be impossible, as it violated the local realist view of causality (Einstein referred to it as "spooky action at a distance"),[4] and argued that the accepted formulation of quantum mechanics must therefore be incomplete.

History[edit] However, they did not coin the word entanglement, nor did they generalize the special properties of the state they considered. Concept[edit] Meaning of entanglement[edit] Efimov state. The Efimov effect is an effect in the quantum mechanics of Few-body systems predicted by the Russian theoretical physicist V. N. Efimov[1][2] in 1970. Efimov’s effect refers to a scenario in which three identical bosons interact, with the prediction of an infinite series of excited three-body energy levels when a two-body state is exactly at the dissociation threshold.

One corollary is that there exist bound states (called Efimov states) of three bosons even if the two-particle attraction is too weak to allow two bosons to form a pair. Amplituhedron. Physicists Discover Geometry Underlying Particle Physics. Personal and Historical Perspectives of Hans Bethe. Atoms Reach Record Temperature, Colder than Absolute Zero. The mention of “spin” of a particle is one that... - Say It With Science. Physics Community Afire With Rumors of Higgs Boson Discovery. Two Diamonds Linked by Strange Quantum Entanglement.

DNA molecules can 'teleport', Nobel Prize winner claims. A Nobel Prize winning biologist has ignited controversy after publishing details of an experiment in which a fragment of DNA appeared to ‘teleport’ or imprint itself between test tubes. According to a team headed by Luc Montagnier, previously known for his work on HIV and AIDS, two test tubes, one of which contained a tiny piece of bacterial DNA, the other pure water, were surrounded by a weak electromagnetic field of 7Hz.

Eighteen hours later, after DNA amplification using a polymerase chain reaction, as if by magic the DNA was detectable in the test tube containing pure water. Oddly, the original DNA sample had to be diluted many times over for the experiment to work, which might explain why the phenomenon has not been detected before, assuming that this is what has happened. The phenomenon might be very loosely described as 'teleportation' except that the bases project or imprint themselves across space rather than simply moving from one place to another. The Higgs Boson Explained. Free particle. Macroscopic quantum phenomena. Quantum mechanics is most often used to describe matter on the scale of molecules, atoms, or elementary particles. Solution of Schrödinger equation for a step potential.