Australian bushfires are a warning to the world. We need help. 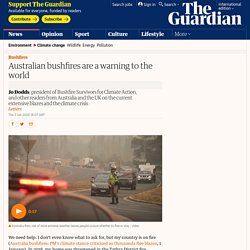 I don’t even know what to ask for, but my country is on fire (Australia bushfires: PM’s climate stance criticised as thousands flee blazes, 1 January). In 2018, my home was threatened in the Tathra District fire. Sixty-nine other homes were lost. It woke me from my complacency and I began to speak up about the urgency of action to reduce greenhouse emissions. I spoke at conferences, workshops and protests. Nothing changed. I’m speaking to friends back home and every one of them – those who have stayed and those who’ve fled – has fear in their voice. That’s a word I have worn to bare threads over the last 20 months: unprecedented. But still our governments, federal and state, with few exceptions, are pretending that this is all normal. So help me. . • At last, the Australian bushfires have finally brought home the real economic threats of the climate emergency.

Nor can you properly run an economy when your infrastructure keeps getting blown down or washed away. Australia's fires are so extreme they are making their own weather. The bushfires in Australia have killed at least nine people and scorched more than 12 million acres since they ignited in September. 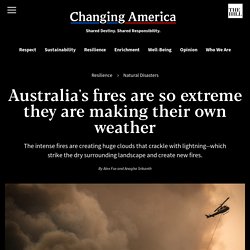 Now, the blazes are creating giant thunderstorms that could spark more fires, according to the Bureau of Meteorology in Victoria. A pyro-cumulonimbus is what it sounds like: a cloud borne of flames. With bushfires raging across the country and temperatures topping 104 degrees in each state, the amount of heat and moisture in the smoke is so great, they condense into these dangerous storm clouds. But instead of rain, embers fall from the sky. Specifically, the clouds form when an updraft generated by a fire’s intense heat sucks smoke, ash and water vapor up into the sky.

The clouds are accompanied by powerful winds that can fling glowing embers up to three miles and even create a truly hellish phenomenon sometimes called a “fire tornado.” The bushfires have reached “catastrophic” levels and reduced air quality to unsafe levels. How to Help People and Animals Affected By the Australia Bushfires. By donating to the Australian Red Cross, you’d be supporting recovery programs and emergency assistance, helping to provide mental health support to reduce trauma, and easing the expenses of volunteers who assist families in the middle of a disaster. 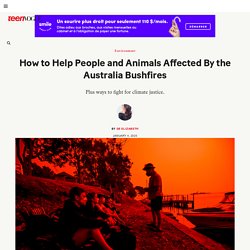 New South Wales Rural Fire Service Donations made to the NSW Rural Fire Service go directly to the Rural Fire Brigades, a group that provides emergency assistance to communities affected by wildfires. Country Fire Authority By giving to the CFA’s Victorian Bushfire Relief, you will help provide relief and recovery to the areas that need it most. The CFA notes that the donation of funds is much more valuable at this time than material items. Salvation Army Australia The Salvation Army’s Disaster Appeal is currently accepting donations in order to help deliver meals and other supports to communities in crisis, as well as the first responders who are assisting the victims. St. If you choose to donate to the St. World Wildlife Fund St. Australia-news. MyFireWatch - Bushfire map information Australia.

Bushfire news alerts. Australia fires: A visual guide to the bushfire crisis. Australia wildfires: Here's what you need to know about the deadly blazes. At least 28 people have died nationwide, and in the state of New South Wales (NSW) alone, more than 3,000 homes have been destroyed or damaged. 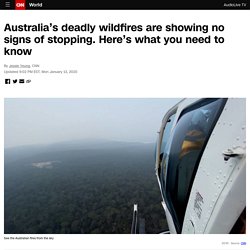 State and federal authorities are struggling to contain the massive blazes, even with firefighting assistance from other countries, including the United States. All this has been exacerbated by persistent heat and drought, and many point to climate change as a factor making natural disasters go from bad to worse. There have been fires in every Australian state, but New South Wales has been hardest hit. Blazes have torn through bushland, wooded areas, and national parks like the Blue Mountains. Some of Australia's largest cities have also been affected, including Melbourne and Sydney -- where fires have damaged homes in the outer suburbs and thick plumes of smoke have blanketed the urban center. The fires range in area from small blazes -- isolated buildings or part of a neighborhood -- to massive infernos that occupy entire hectares of land.