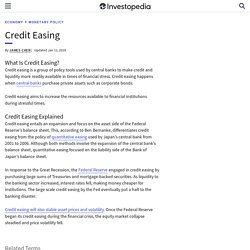 UK. Quantitative Easing: How Well Does This Tool Work? Quantitative easing (QE)—large-scale purchases of assets by central banks—led to a large increase in the Federal Reserve’s balance sheet during the global financial crisis (2007-2008) and in the long recovery from the 2008-2009 recession. 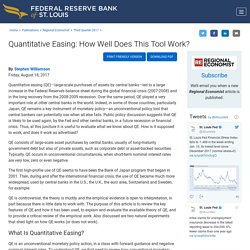 Over the same period, QE played a very important role at other central banks in the world. Indeed, in some of those countries, particularly Japan, QE remains a key instrument of monetary policy—an unconventional policy tool that central bankers can potentially use when all else fails. Public policy discussion suggests that QE is likely to be used again, by the Fed and other central banks, in a future recession or financial crisis.

Thus, at this juncture it is useful to evaluate what we know about QE. How is it supposed to work, and does it work as advertised? QE consists of large-scale asset purchases by central banks, usually of long-maturity government debt but also of private assets, such as corporate debt or asset-backed securities. Figure 1. Quantitative Easing and Gold. The policy of quantitative easing (QE) and quantitative easing (QE) tapering has an effect on many markets worldwide. 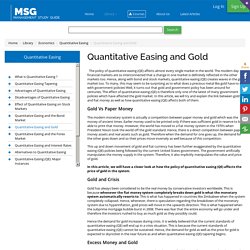 One of these markets is the Forex markets. In 2012, the mere news of a possible quantitative easing (QE) tapering by the Fed sent the world currency markets into a tailspin as many other currencies belonging to the developing countries (with huge fiscal deficits) faced historic lows against the dollar. The cause and effect relationship between the quantitative easing (QE) tapering policy and the Forex market is unclear. However, the fact that such a relationship exists is certain. In this article, we will explore this relationship in more detail. Federal Reserve Board - Communications Challenges and Quantitative Easing. It is an honor to be here today with such distinguished panelists to discuss the communications challenges associated with quantitative easing. 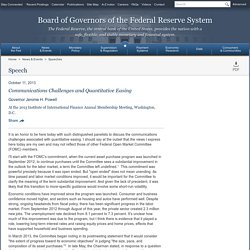 I should say at the outset that the views I express here today are my own and may not reflect those of other Federal Open Market Committee (FOMC) members. I'll start with the FOMC's commitment, when the current asset purchase program was launched in September 2012, to continue purchases until the Committee sees a substantial improvement in the outlook for the labor market, a term the Committee left undefined.1 This commitment was powerful precisely because it was open ended. But "open ended" does not mean unending. As time passed and labor market conditions improved, it would be important for the Committee to clarify the meaning of the term substantial improvement. And given the lack of precedent, it was likely that this transition to more-specific guidance would involve some short-run volatility. Thank you. 1. 2. 3. 4. 5. Quantitative Easing Explained. Quantitative easing (QE) is an expansion of the open market operations of a country's central bank. 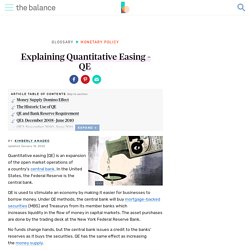 In the United States, the Federal Reserve is the central bank. QE is used to stimulate an economy by making it easier for businesses to borrow money. How Quantitative Easing Affects the Labor Market. In the wake of the Great Recession, the U.S. economy remained subdued for a prolonged period. 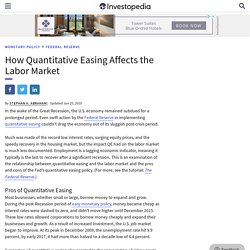 Even swift action by the Federal Reserve in implementing quantitative easing couldn't drag the economy out of its sluggish post-crisis period. Much was made of the record low interest rates, surging equity prices, and the speedy recovery in the housing market, but the impact QE had on the labor market is much less documented. Employment is a lagging economic indicator, meaning it typically is the last to recover after a significant recession. Quantitative Easing Definition. What Is Quantitative Easing? 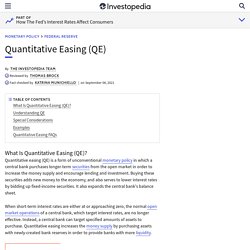 Quantitative easing is an unconventional monetary policy in which a central bank purchases government securities or other securities from the market in order to increase the money supply and encourage lending and investment. When short-term interest rates are at or approaching zero, normal open market operations, which target interest rates, are no longer effective, so instead a central bank can target specified amounts of assets to purchase.

Quantitative easing increases the money supply by purchasing assets with newly created bank reserves in order to provide banks with more liquidity. Key Takeaways Volume 75% Press shift question mark to access a list of keyboard shortcuts. Assouplissement quantitatif. Has quantitative easing helped the US economy? 17 September 2014Last updated at 15:36 ET By Kim Gittleson BBC business reporter, Washington, DC Since the end of the financial crisis in 2008-2009, the US Federal Reserve has been, essentially, printing money to boost the US economy. 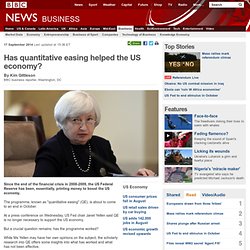 The programme, known as "quantitative easing" (QE), is about to come to an end in October. At a press conference on Wednesday, US Fed chair Janet Yellen said QE is no longer necessary to support the US economy. Has quantitative easing worked in the US? 29 October 2014Last updated at 20:42 ET By Andrew Walker BBC World Service Economics correspondent One of the biggest economic experiments of our age is coming to an end. 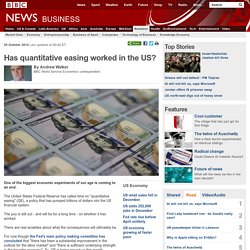 The United States Federal Reserve has called time on "quantitative easing" (QE), a policy that has pumped trillions of dollars into the US financial system. The jury is still out - and will be for a long time - on whether it has worked. There are real anxieties about what the consequences will ultimately be. Quantitative easing. Expansionary monetary policy to stimulate the economy typically involves the central bank buying short-term government bonds to lower short-term market interest rates. 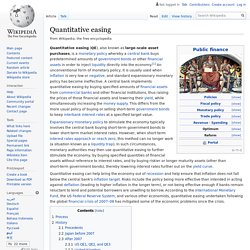 However, when short-term interest rates approach or reach zero, this method can no longer work (a situation known as a liquidity trap). In such circumstances, monetary authorities may then use quantitative easing to further stimulate the economy, by buying specified quantities of financial assets without reference to interest rates, and by buying riskier or longer maturity assets (other than short-term government bonds), thereby lowering interest rates further out on the yield curve. Quantitative easing can help bring the economy out of recession and help ensure that inflation does not fall below the central bank's inflation target.

Process[edit] Standard central bank monetary policies are usually enacted by buying or selling government bonds on the open market to reach a desired target for the interbank interest rate. News - What is Quantitative Easing? Quantitative Easing explained - in 70 seconds. Ask Andy: What is quantitative easing?

(14) Quantitative Easing - How It Works. Crash course - The origins of the financial crisis. THE collapse of Lehman Brothers, a sprawling global bank, in September 2008 almost brought down the world’s financial system. It took huge taxpayer-financed bail-outs to shore up the industry. Even so, the ensuing credit crunch turned what was already a nasty downturn into the worst recession in 80 years. Massive monetary and fiscal stimulus prevented a buddy-can-you-spare-a-dime depression, but the recovery remains feeble compared with previous post-war upturns.

What is quantitative easing? Image copyright Getty Images Governments and central banks like there to be "just enough" growth in an economy - not too much that could lead to inflation getting out of control, but not so little that there is stagnation. Their aim is the so-called "Goldilocks economy" - not too hot, but not too cold. One of the main tools they have to control growth is raising or lowering interest rates. Lower interest rates encourage people or companies to spend money, rather than save. But when interest rates are at almost zero, central banks need to adopt different tactics - such as pumping money directly into the financial system. Le Quantitative Easing (QE), c'est quoi? Comment une banque centrale peut-elle injecter de l'argent dans l'économie? Elle imprime des billets et basta? Le Captain' vous explique tout cela, en vous introduisant le concept de l'assouplissement quantitatif, alias le Quantitative Easing.