OAuth with Ionic and ngCordova. This is a guest post by Nic Raboy, an application developer with a strong background in Android, AngularJS, Ionic, Java, SQL, and Unity3D. 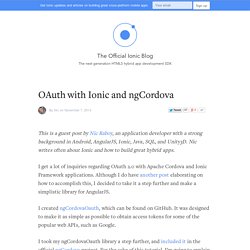 Nic writes often about Ionic and how to build great hybrid apps. I get a lot of inquiries regarding OAuth 2.0 with Apache Cordova and Ionic Framework applications. Although I do have another post elaborating on how to accomplish this, I decided to take it a step further and make a simplistic library for AngularJS. I created ngCordovaOauth, which can be found on GitHub. It was designed to make it as simple as possible to obtain access tokens for some of the popular web APIs, such as Google. I took my ngCordovaOauth library a step further, and included it in the official ngCordova project. When I was designing the OAuth functionality, my strategy was to expect a promise based on the login flow. Although I designed this with Ionic Framework in mind, it will also work for any Apache Cordova or Phonegap application that makes use of AngularJS.

Conclusion. Thaiat/angular-fbopen. Ionic Framework Tutorial. Crosswalk comes to Ionic. Updated as of 4/13/2015 Ionic and Crosswalk With our latest CLI update, we’re excited to introduce the ability to package modern rendering engines within your app for Cordova, starting with Crosswalk for Android. 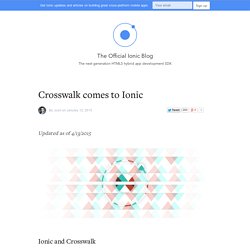 Crosswalk provides Android developers a bundled Chrome webview for their projects, resulting in better performance and predictability! Our team is passionate about making hybrid mobile development awesome, and we’re so grateful to our committed, enthusiastic community for helping us succeed in our mission. Getting Started With Crosswalk First, make sure you get the latest Ionic CLI, and then you can easily create an app, add the Android platform, and add Crosswalk to the project. New Project. The Official Ionic Blog. When developing apps, it’s fair to expect that a large list of data will be needed. 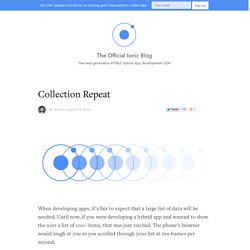 Until now, if you were developing a hybrid app and wanted to show the user a list of 100+ items, that was just too bad. The phone’s browser would laugh at you as you scrolled through your list at ten frames per second. After trying to fix this with every trick you knew, your frustration would slowly mount until you sighed and acknowledged that the web was just too limited for realistic apps. Then you would be forced to learn Objective-C or Java and start building a native app. Fortunately, developers no longer need to face such dramatic scenarios, because Ionic has a solution. How Does Native Do It, Anyway? Native apps render huge lists quite seamlessly. Ion-content scroll="true" breaks ng-repeat render? - ionic - Ionic. I'm having a strange redraw problem when I show/hide ng-repeated items using a model attribute. 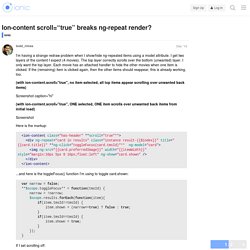 I get two layers of the content I expect (4 movies). The top layer correctly scrolls over the bottom (unwanted) layer. I only want the top layer. Each movie has an attached handler to hide the other movies when one item is clicked. Speeding up AngularJS apps with simple optimizations - Tutorial - Binpress. AngularJS is a huge framework with that already has many performance enhancements built in, but they can’t solve all our problems. 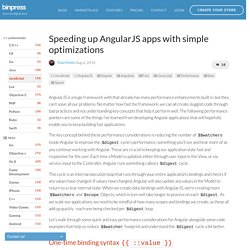 No matter how fast the framework, we can all create sluggish code through bad practices and not understanding key concepts that help it perform well. The following performance pointers are some of the things I’ve learned from developing Angular applications that will hopefully enable you to keep building fast applications. The key concept behind these performance considerations is reducing the number of $$watchers inside Angular to improve the $digest cycle’s performance, something you’ll see and hear more of as you continue working with Angular. These are crucial to keeping our application state fast and responsive for the user. Ionic Elastichat. $watch how the $apply runs a $digest. UPDATE: This post is meant for beginners, for those that just started to learn Angular and want to know how data-binding works. 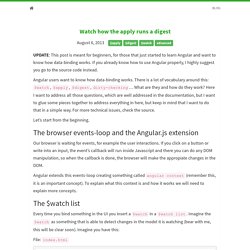 If you already know how to use Angular properly, I highly suggest you go to the source code instead. Angular users want to know how data-binding works. There is a lot of vocabulary around this: $watch, $apply, $digest, dirty-checking… What are they and how do they work? Here I want to address all those questions, which are well addressed in the documentation, but I want to glue some pieces together to address everything in here, but keep in mind that I want to do that in a simple way. For more technical issues, check the source. Let’s start from the beginning. The browser events-loop and the Angular.js extension Our browser is waiting for events, for example the user interactions.

Angular extends this events-loop creating something called angular context (remember this, it is an important concept). The $watch list File: index.html File: controllers.js.