Ghana's coastal erosion: The village buried in sand. Bubbles could be a targeted remedy for ocean acidification. Corals, shellfish, and other marine creatures made of calcium carbonate are threatened by ocean acidification, a consequence of rising atmospheric carbon dioxide levels increasing dissolved CO2 in the ocean. 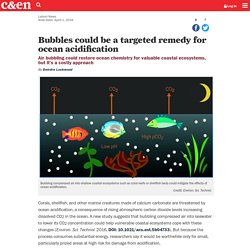 A new study suggests that bubbling compressed air into seawater to lower its CO2 concentration could help vulnerable coastal ecosystems cope with these changes (Environ. Sci. Technol. 2016, DOI: 10.1021/acs.est.5b04733). But because the process consumes substantial energy, researchers say it would be worthwhile only for small, particularly prized areas at high risk for damage from acidification. 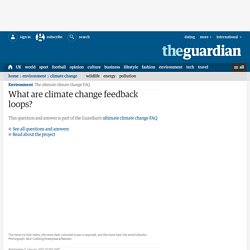 A positive feedback accelerates a temperature rise, whereas a negative feedback decelerates it. Scientists are aware of a number of positive feedbacks loops in the climate system. One example is melting ice. Because ice is light-coloured and reflective, a large proportion of the sunlight that hits it is bounced back to space, which limits the amount of warming it causes. But as the world gets hotter, ice melts, revealing the darker-coloured land or water below. Various other feedbacks – related to emissions from soils and permafrost, for example, and changes to ocean evaporation – are known or thought to exist.

What are climate change feedback loops? 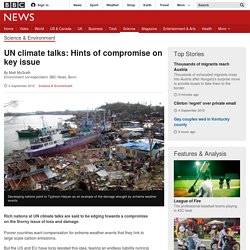 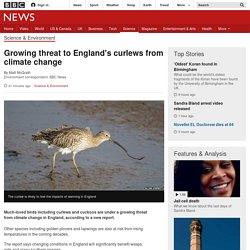 Other species including golden plovers and lapwings are also at risk from rising temperatures in the coming decades. The report says changing conditions in England will significantly benefit wasps, ants and many southern species. The study is said to be the largest of its kind ever undertaken in England. Researchers looked at the impacts of a 2 degrees C rise in global average temperatures on over 3,000 species. Carbon credits undercut climate change actions says report. The vast majority of carbon credits generated by Russia and Ukraine did not represent cuts in emissions, according to a new study. 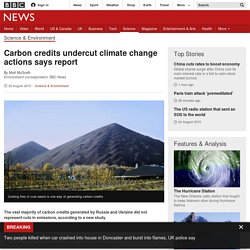 The authors say that offsets created under a UN scheme "significantly undermined" efforts to tackle climate change. The credits may have increased emissions by 600 million tonnes. In some projects, chemicals known to warm the climate were created and then destroyed to claim cash. As a result of political horse trading at UN negotiations on climate change, countries like Russia and the Ukraine were allowed to create carbon credits from activities like curbing coal waste fires, or restricting gas emissions from petroleum production. Under the UN scheme, called Joint Implementation, they then were able to sell those credits to the European Union's carbon market.

But this study, from the Stockholm Environment Institute, says the vast majority of Russian and Ukrainian credits were in fact, "hot air" - no actual emissions were reduced. Arctic ice 'grew by a third' after cool summer in 2013 - BBC News. The volume of Arctic sea ice increased by around a third after an unusually cool summer in 2013. 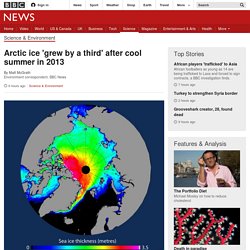 Researchers say the growth continued in 2014 and more than compensated for losses recorded in the three previous years. The scientists involved believe changes in summer temperatures have greater impacts on ice than thought. Carbon Dioxide. Global warming is not driving this refugee crisis, but it may drive the next. There are many causes of the European refugee crisis, but one thing is certain despite headlines to the contrary: Climate change is not the dominant factor. 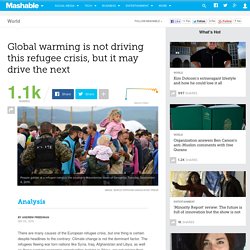 The refugees fleeing war torn nations like Syria, Iraq, Afghanistan and Libya, as well as those seeking economic opportunities lacking in Africa, are not risking their lives along treacherous sea and land routes because of global warming-related factors. News reports calling the refugees the first "climate refugees" are getting too far ahead of the curve. But the ongoing humanitarian disaster provides a teaching opportunity for a time not too long from now when the first true climate refugees trigger a similar situation. 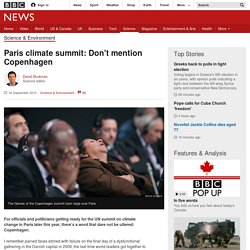 I remember pained faces etched with failure on the final day of a dysfunctional gathering in the Danish capital in 2009, the last time world leaders got together to try to tackle global warming, and the collective memory still haunts the process six years on. So, in the run-up to the next big attempt to secure a global treaty limiting greenhouse gases, it's worth exploring what's changed since 2009 - and what hasn't.

In some ways, the negotiating landscape is transformed, mainly because of dramatic shifts by the two biggest emitters, the United States and China. President Obama spoke of the threat of global warming from his first day in office but he was distracted by healthcare in his first term and came to Copenhagen with his hands tied by a reluctant Congress. China on board. Syria's Climate Conflict.