Conspiracy Theory. Hillary Clinton's Deceptive Blame-Shifting. Authored by Robert Parry via ConsortiumNews.com, Hillary Clinton has grown even more insistent that she was not at fault for her stunning election defeat last November, claiming that 1,000 Russian “agents” and their American collaborators were a decisive factor, a bizarre twist that further locks the Democrats into their evidence-light “Russia-gate” obsession. 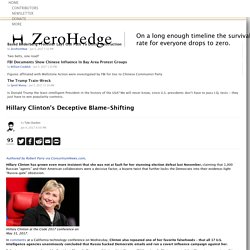 Hillary Clinton at the Code 2017 conference on May 31, 2017. In comments at a California technology conference on Wednesday, Clinton also repeated one of her favorite falsehoods – that all 17 U.S. intelligence agencies unanimously concluded that Russia hacked Democratic emails and ran a covert influence campaign against her. Referring to a report released by President Obama’s Director of National Intelligence (DNI) on Jan. 6, Clinton asserted that “Seventeen agencies, all in agreement, which I know from my experience as a Senator and Secretary of State, is hard to get. The Mysterious ‘Agents’ So, this high-tech spy-vs.

U.S. Rep. Shocking New Snowden Confession: “Climate Change is a Hoax by the CIA” - Conservative News & Right Wing News. On March 16, 2016 in World News The Observatorial writes: Snowden, who lives as a fugitive in Russia after leaking documents about the NSA’s surveillance programs, has made some previously unreported allegations during an interview with the Moscow Tribune. 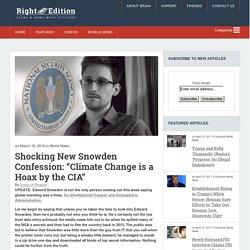 Mr. Snowden says the CIA first orchestrated the spread of the “Global Warming scare” in the 1950s, in order to divert the attention of the scientific community, from the dangers of the weapons race and reinforce its control over research institutes. “I have documents showing that the CIA invented the whole thing,” claims Edward Snowden. Mr. Edward Snowden was hired by an NSA contractor in 2013 after previous employment with Dell and the CIA. The US government filed espionage charges against him shortly after his revelations were made public. True Size Of Africa. Information Control. Fox drops Seth Rich murder story as Sean Hannity attacks 'liberal fascism' Fox News has retracted a story on the 2016 murder of Democratic National Committee staffer Seth Rich, which was roundly condemned for perpetuating conspiracy theories, while host Sean Hannity said he would cease further discussion of the subject on his show in the network’s evening lineup. 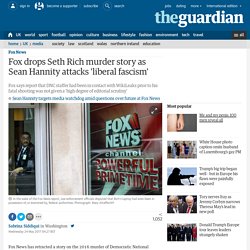 Both Fox and Hannity invited a torrent of criticism for a report on 16 May that Rich, a 27-year-old staffer at the DNC, had been in contact with the website WikiLeaks prior to his fatal shooting in Washington in July of 2016. The unsubstantiated report was published and promoted on both Fox News, most heavily on Hannity’s primetime show, and the network’s local Washington affiliate, WTTG-TV.

In a statement issued on Tuesday, Fox News said the article in question “was not initially subjected to the high degree of editorial scrutiny we require for all our reporting”. “Upon appropriate review, the article was found not to meet those standards and has since been removed,” the statement read. Cover Stories Are Used To Control Explanations. Twitter Suspends WND For Seth Rich Story. A couple of days ago, WND ran a story entitled "Bombshell: Donna Brazile Warned Off Private Eye On Seth Rich Murder. 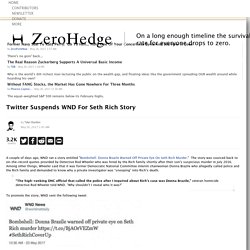 " The story was sourced back to on-the-record quotes provided by Detective Rod Wheeler who was hired by the Rich family shortly after their son's suspicious murder in July 2016. Among other things, Wheeler said that it was former Democratic National Committee interim chairwoman Donna Brazile who allegedly called police and the Rich family and demanded to know why a private investigator was “snooping” into Rich’s death. “The high-ranking DNC official that called the police after I inquired about Rich’s case was Donna Brazile,” veteran homicide detective Rod Wheeler told WND. “Why shouldn’t I reveal who it was?” To promote the story, WND sent the following tweet: Unfortunately, Twitter seemed to take issue with the story and sent a message to WND demanding that they "Delete Tweet.

" Vladimir Putin fights election-tampering accusations with his own shots at US. Russian President Vladimir Putin turned the tables on claims the Kremlin meddled in the U.S. presidential election, with a feisty Putin on Friday accusing American spies of “crude and systematic” widespread interference in Russian affairs. 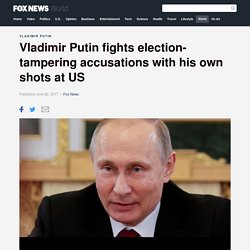 Putin, speaking at an economic forum in St. Petersburg moderated by NBC’s Megyn Kelly, said the probe into Russia’s alleged attempts to influence the election via collusion with President Trump’s campaign team was merely “hysteria,” Reuters reported. He even tried to calm an inquisitive Kelly by asking: “Isn’t there a pill they can give you?” He also compared the anti-Russian sentiment in the U.S. to anti-Semitism. “It’s like saying everything is the Jews’ fault,” said Putin, who placed the blame for Hillary Clinton’s November loss squarely at the feet of the Democratic presidential candidate and members of her party. Putin deftly brushed off questions about meetings that members of the Trump campaign – including then-Sen.